The garment was gifted by the Prince Consort to his valet, Rudolph Löhlein in the 1850s

A floral royal dressing gown worn by Queen Victoria’s husband Prince Albert is being sold having been unearthed from a wardrobe after 150 years.

The garment was given as a gift by the Prince Consort to his devoted valet, Rudolph Löhlein in the 1850s.

Although the full-length silk robe has since been passed down through Lohlein’s family, it has always been locked away in a wardrobe.

His great-great-grandson has now taken it out of storage and has put it up for sale with Hansons Auctioneers of Etwall, Derbys, for £3,000.

The handmade item, that has a crown mark inside the collar and features a flori-bunda rose design in golds and dusky pinks, has remained in excellent condition.

The unnamed vendor, who comes from Surrey, said: ‘The dressing robe is beautifully made. I inherited it from my mother. It’s been carefully preserved for many years, wrapped up and put away in a wardrobe.’

Charles Hanson, of Hansons Auctioneers, said: ‘We’re honoured to be selling this exquisite royal dressing robe, which has a dash of flower power thanks to its flori-bunda rose design.

‘Its discovery allows us to pay tribute to Löhlein, a man who served two of Britain’s most prominent royal figures with admirable devotion.’

German-born Lohlein worked in the Royal Household for over 40 years and was at Prince Albert’s side when he he died in 1861.

Afterwards he became Queen Victoria’s personal attendant and was highly thought of he was rewarded with a job and pension for life by the Royal Household. 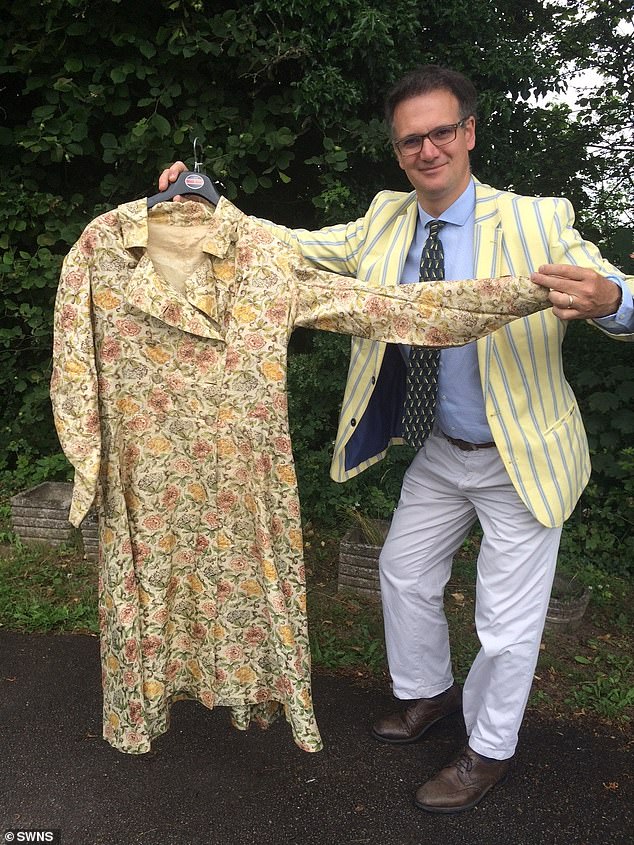 Charles Hanson with the dressing robe. He said: ‘We’re honoured to be selling this exquisite royal dressing robe which has a dash of flower power thanks to its flori-bunda rose design’

An 1896 newspaper obituary on Löhlein included a note by Queen Victoria which stated: ‘This faithful and trusted valet nursed his dear master so tenderly through his sad illness in December, 1861, and is now always with me as my personal groom of the chambers or valet.

‘I gave him a house near Windsor Castle where he resides when the Court is there.’

The vendor added: ‘Rudolph Löhlein was my great-great grandfather. He became the Prince Consort’s second valet in 1847 and then principal valet in 1858. They knew each other as children.

‘He was at Prince Albert’s death bed when he died aged 42. My father used to say Albert died in his arms. 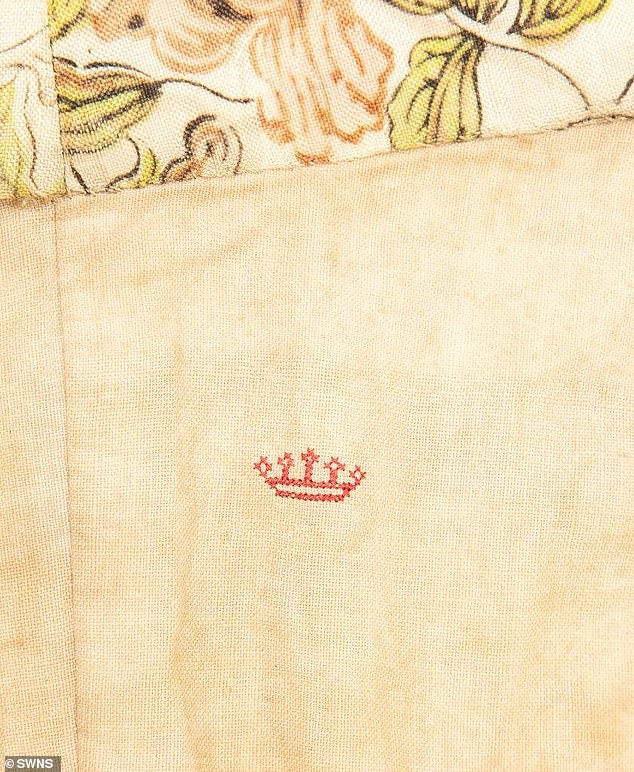 The handmade item, that has a crown mark inside the collar and features a flori-bunda rose design in golds and dusky pinks, has remained in excellent condition through the years

‘Löhlein headed Prince Albert’s funeral procession when it passed the nave of St George’s Chapel. Then, when the coffin was removed to Frogmore, his final resting place, it was Löhlein who was entrusted with conveying Prince Albert’ s crown and baton.

‘He made his mark in royal history. In the Victoria series on television, he is mentioned.’

The dressing gown is being sold by Hansons at the Normansfield Theatre in Teddington, south West London on August 12.