Florida and Mississippi are under states of emergency ahead Subtropical Storm Alberto hitting the Golf Coast.

Alberto, the first named storm of the 2018 hurricane season, is barreling through the Caribbean Sea and threatening to bring heavy rainfall, mudslides, and flash floods to parts of Mexico, Cuba, Florida and the US Gulf Coast this Memorial Day Weekend.

Mississippi governor Phil Bryant has declared a state of emergency as the storm moves toward the state’s coast.

Florida governor Rick Scott also declared a state of emergency for all 67 counties Saturday morning to ‘prepare for the torrential rain and severe flooding this storm will bring.’ 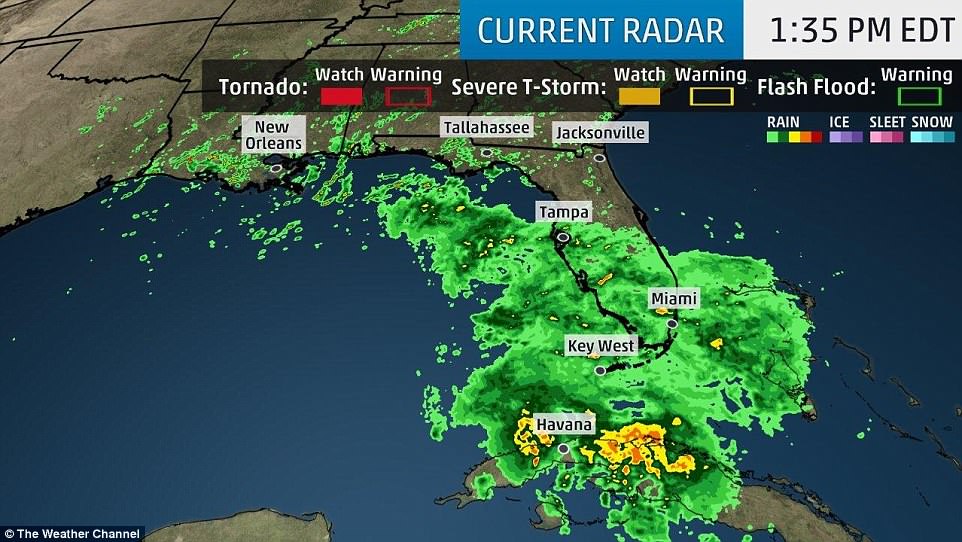 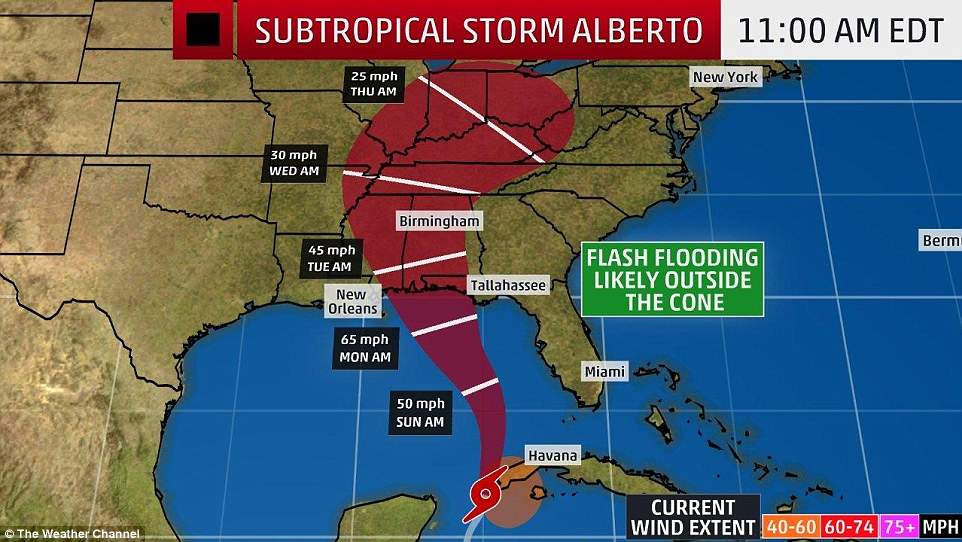 In Southern Alabama, Mississippi and the western Florida panhandle there could be as much as one foot of rain. Flooding is expected to be heavy as a result 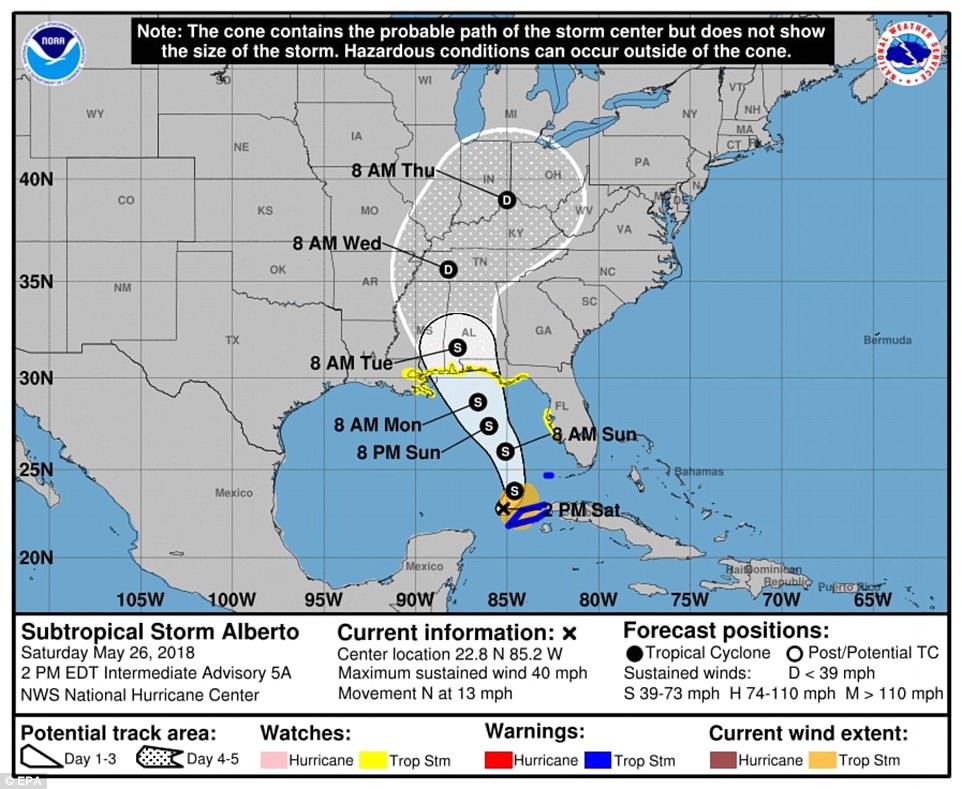 In a tweet Saturday, Governor Bryant said he signed an order making the Mississippi National Guard and other state resources available should they become necessary.

The latest advisory from the National Hurricane Center shifts the storm farther east with a potential landfall near the Alabama-Florida state line.

At a briefing at the state emergency operations center in Tallahassee, authorities urged Floridians to take the storm seriously. 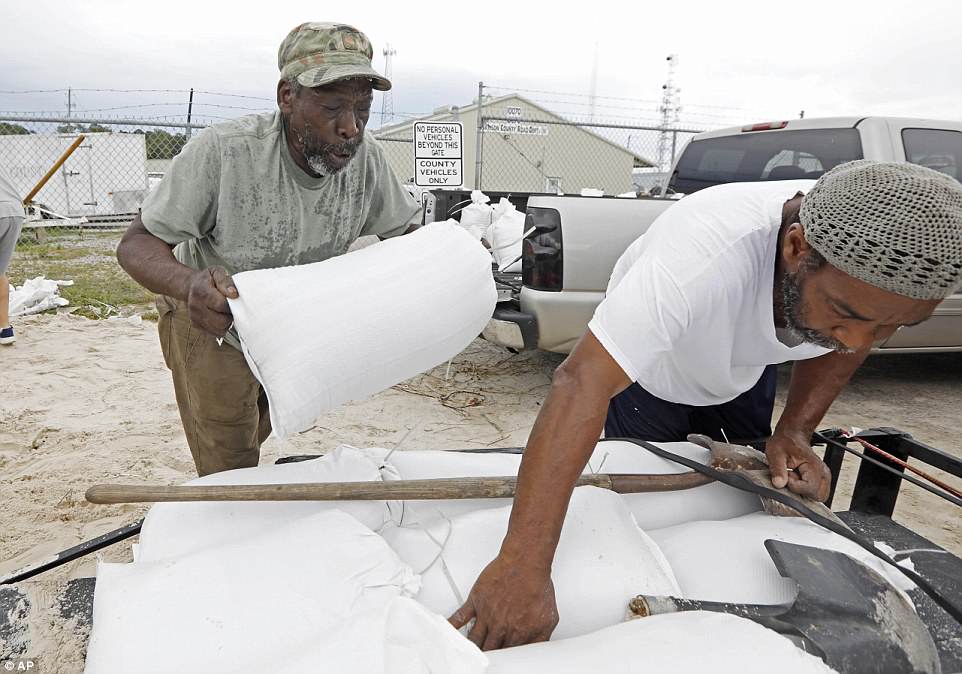 Tommy Whitlock, left, places a filled sand bag onto his trailer at a Harrison County Road Department sand bag location, as his friend Joseph Buckner adjusts the load while preparing for Subtropical Storm Alberto to make its way through the Gulf of Mexico in Gulfport, Mississippi 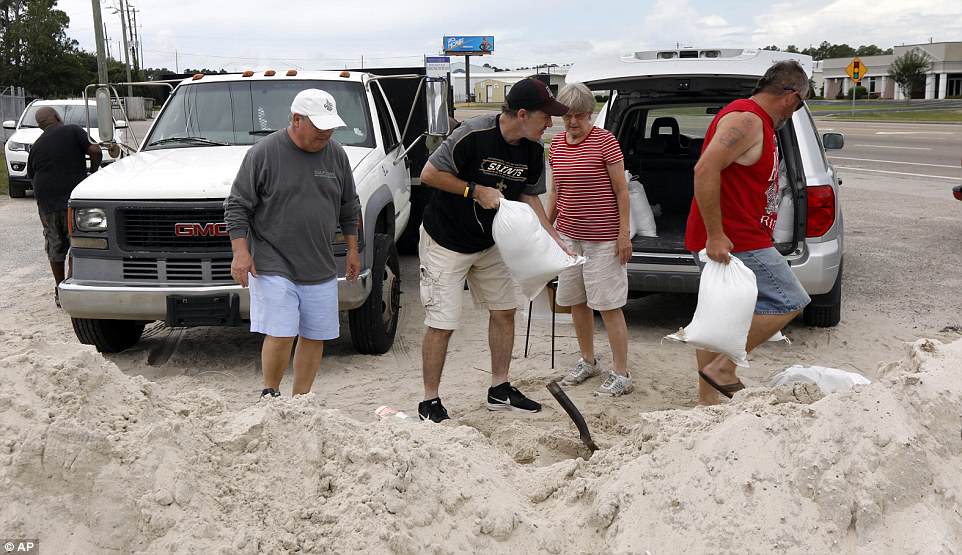 Wes Maul, the state’s emergency management director, said timing of the storm is uncertain, but the entire state will feel the effects. Swelling riverbanks, tornadoes and localized flooding are possible.

Along the coast three to six inches of rain are expected. The coastal Carolinas and southern Florida are expected to experience even more rain.

In Southern Alabama, Mississippi and the western Florida panhandle there could be as much as one foot of rainfall.

On Thursday, there were severe storms that blasted from the Midwest to the East Coast.

Those same conditions continued in the region again on Friday. 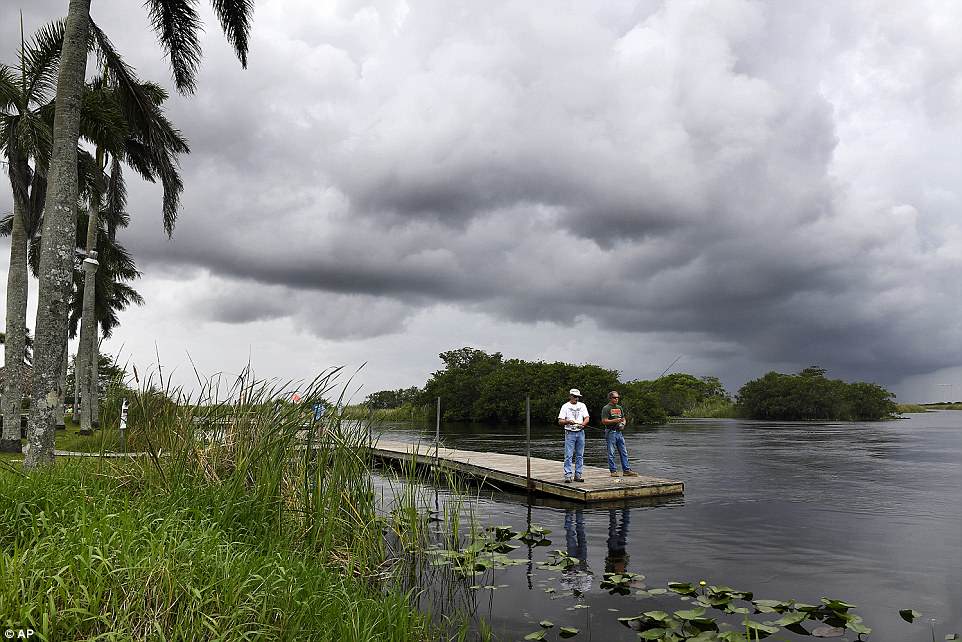 Mario Badia and his brother, Robert Badia, fish on the edge of a boat dock at Holiday Park as dark rain clouds loom in the distance in Davie, Florida Friday 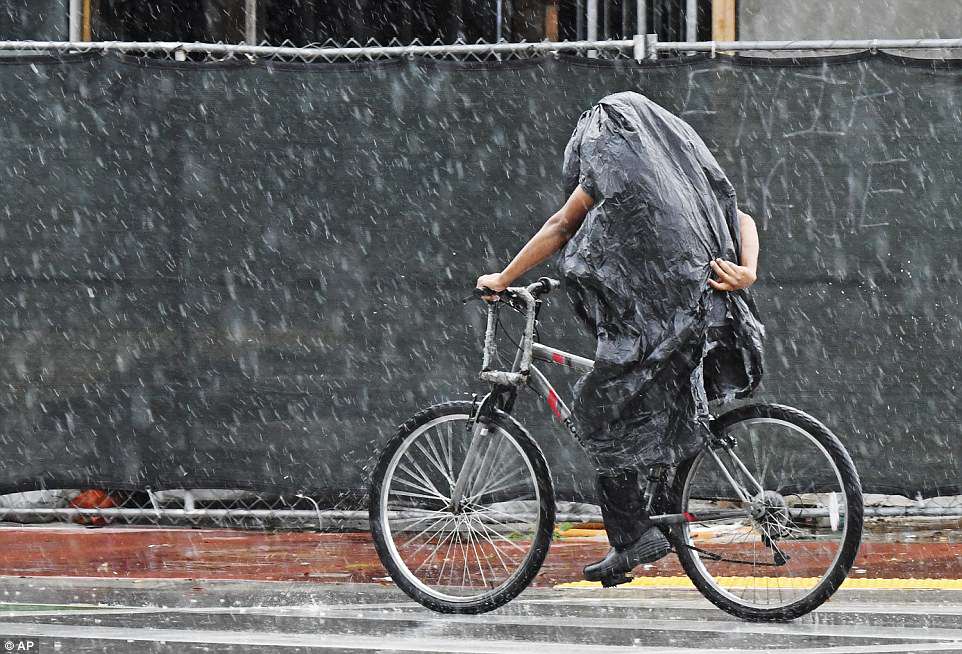 A cyclist tries to stay dry along Collins Avenue in Miami Beach, Florida 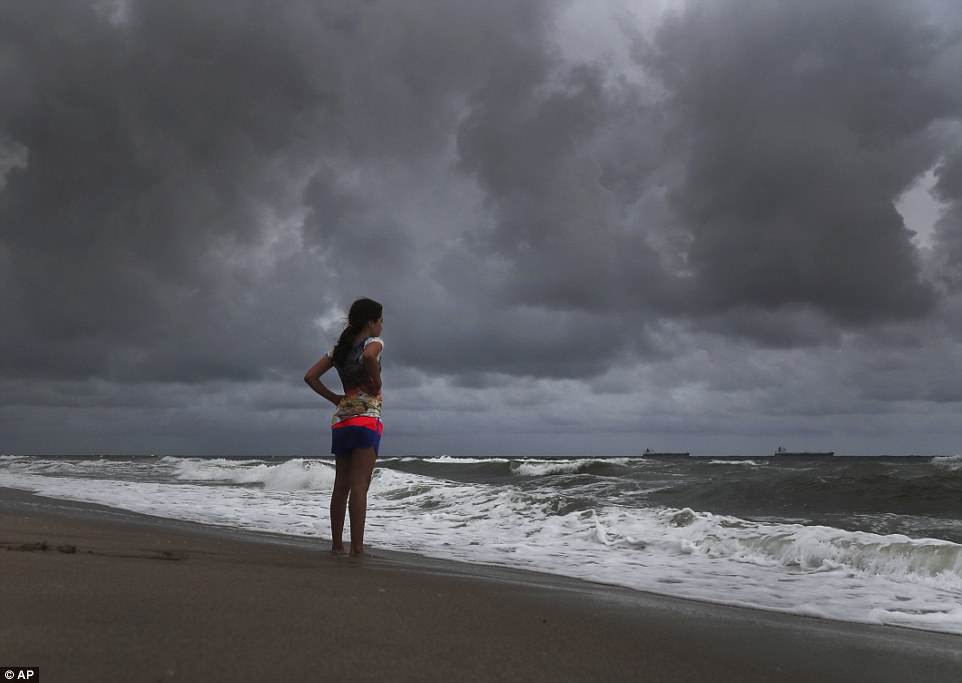 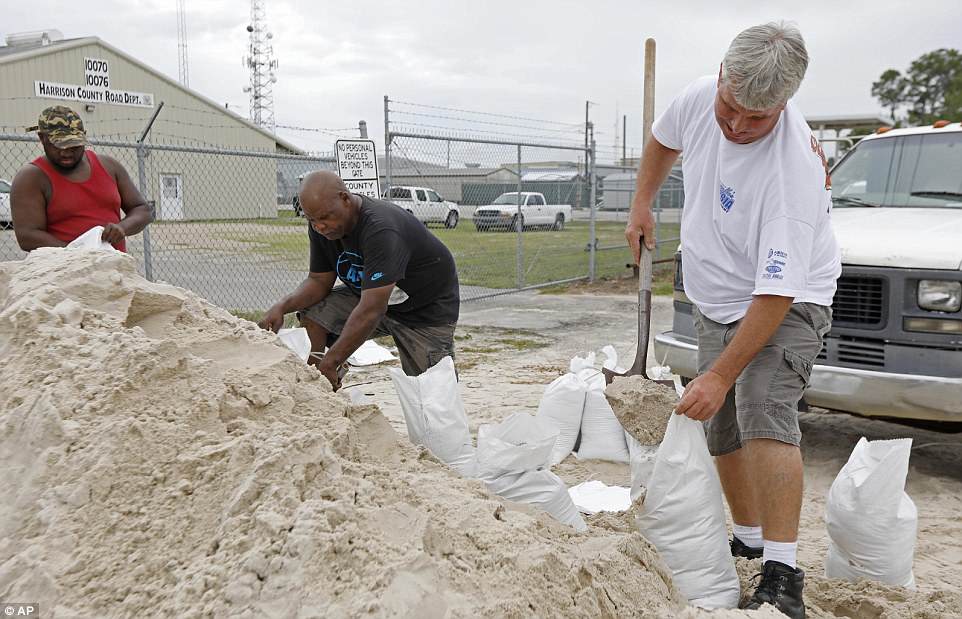 Storm Alberto has continued roiling toward parts of coastal Mexico and Cuba with rip currents and dangerous surf on Saturday.

Both countries issued tropical storm watches for portions of their coastlines, with rain totals in some isolated areas of up to 25 inches.

US forecasters followed suit by issuing a tropical storm watch for parts of the Gulf Coast from the Florida Panhandle southwest of Tallahassee to the New Orleans metropolitan area.

At 5am EDT Saturday morning, the National Hurricane Center in Miami said Alberto was moving north-northeastward toward the Yucatan Channel and was centered about 95 miles (105 kilometers) southeast of Cozumel, Mexico. Its top sustained winds were 40 mph (65 kph).

A gradual strengthening is expected through the weekend as it moves north. 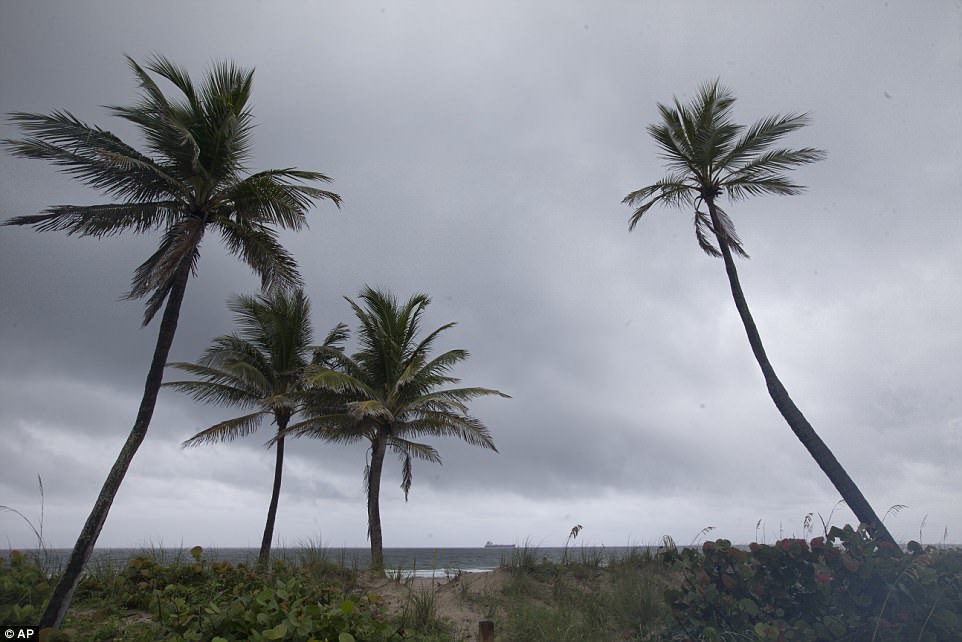 Empty beaches and low-hanging clouds are shown, Friday, May 25, 2018, at Fort Lauderdale Beach