A Florida couple who had been stopped on DUI charges after riding their bikes in the dark started having ‘sex in the back of a cop car.’

Aaron Thomas, 31, and Megan Mondanaro, 35, were detained at around 11:40pm on Friday after a deputy saw them cycling without lights.

The pair were nearly hit by a vehicle in Nassau County, Florida, and said to have had ‘bloodshot eyes’ and smelled strongly of alcohol, reports the New York Post.

In an arrest report the deputy explained he put the couple inside the car and while standing outside ‘Megan and Aaron took their clothes off and started to have sex’.

Aaron Thomas, 31, and Megan Mondanaro, 35, pictured, allegedly started having sex on the back seat of a police patrol car after they were detained in Florida on Friday night

He said: ‘When I opened up the door to stop them, Aaron was naked and Megan had her pants down.’

Ex-con Thomas, who had previously served 46 days behind bars for assaulting a law enforcement officer, tried to run away from the deputy, according to the report.

However he was found nearby and booked with another charge of theft as ran off with police handcuffs.

Thomas’ blood alcohol content was .145 when he was arrested. This is nearly twice the legal limit in Florida, reports News4Jax . 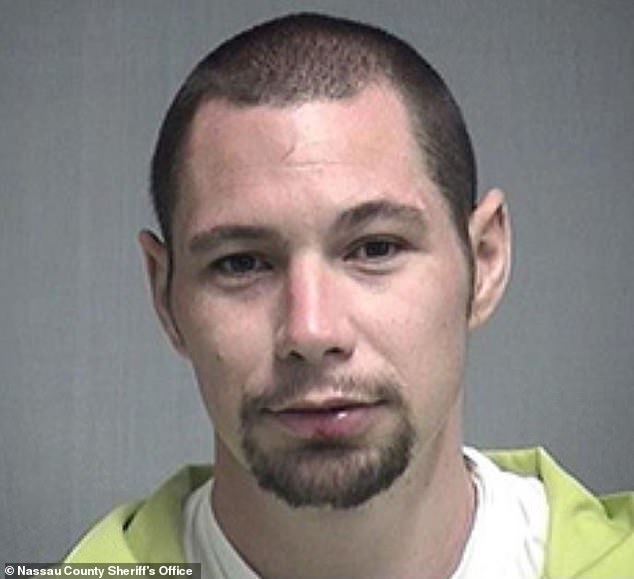 Thomas, pictured, tried to run off but was found by police nearby. He was taken to Nassau County jail and being held without bail

Mondanaro, who had recently served 60 days for a parole violation, was said to have become violent when she was moved to another patrol car.

The 35-year-old was allegedly put on the floor and then taken to the hospital to be checked.

Both Thomas and Mondanaro were taken to Nassau County jail on charges including resisting with violence and exposure of sexual organs.

Mondanaro’s bond was set at $12,508 and Thomas was being held without bail. It is thought that both of them were still behind bars as of yesterday.