A Florida family who rode out Hurricane Michael have been rescued after a relative miraculously spotted a ‘HELP’ message on satellite images that had been spelled out using downed trees.

Mother-of-two Amber Gee evacuated her home in Callaway, just outside Panama City, on Thursday after the deadly Category 4 hurricane made landfall.

Gee was using NOAA’s interactive satellite maps on Saturday to view any potential damage to her grandmother’s property in Youngstown.

But when Gee zoomed in on her grandmother’s house, she spotted the word ‘HELP’ spelled out on the grass.

Amber Gee was using NOAA’s satellite maps on Saturday to view any potential damage to her grandmother’s property in Youngstown, Florida when she saw the HELP message

She told ABC News that her uncle, Ernest Gee, had used fallen trees to create the S.O.S. message in the hope of being rescued.

‘I was checking on damages in the area on houses that belong to my family and I came across my grandma’s house… and they had the word HELP written out in the yard,’ she said.

Gee had assumed her relatives had all evacuated prior to the hurricane striking.

While her 80-year-old grandmother had evacuated, her uncle, aunt and a family friend became trapped after riding out the storm.

Gee immediately sent authorities a photo of the message and emergency services went out to inspect the property.

Her relatives were rescued at about 2am on Sunday.

‘Apparently, they had to cut through a lot of downed trees to get there,’ Gee said.

‘The hurricane has turned everything upside down everywhere.’ 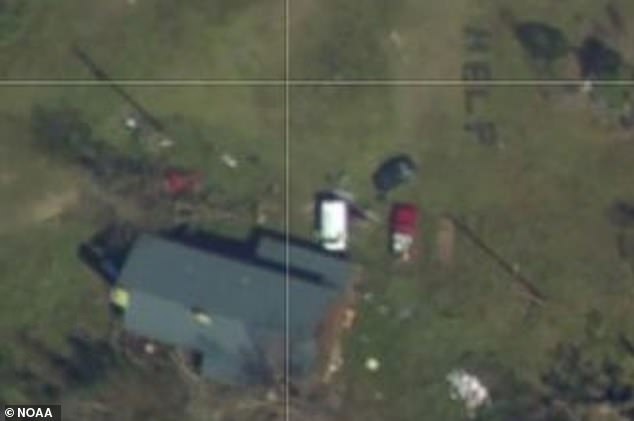 Her uncle Ernest Gee had used fallen trees to create the S.O.S. message in the hope of being rescued after they became trapped by Hurricane Michael 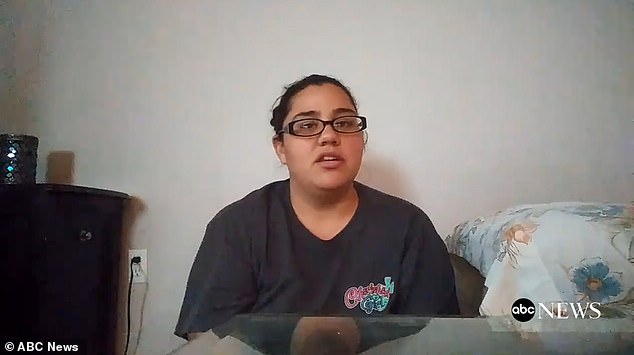 Amber Gee, a mother-of-two, had evacuated her home in Callaway, just outside Panama City, on Thursday after the deadly Category 4 hurricane made landfall

Michael made landfall with 155 mph winds on the Florida Panhandle on October 10.

At least 18 people in four states have died as a result of the storm and dozens remained missing on Sunday in Florida Panhandle communities reduced to ruins.

Rescuers said they expected the death toll to rise and they were using cadaver dogs and heavy equipment to search through collapsed homes in small towns such as Mexico Beach and Panama City for more victims.

Rescue efforts have been hampered by blocked roads and huge piles of rubble in many communities such as Mexico Beach, which took a direct hit from the massive storm that killed at least one person there.

Survivors are grappling with power outages and shortages of food and water amid the mazes of uprooted trees and debris.

Electricity and telephone service are slowly being restored but it could be weeks before power returns to the state’s most damaged areas. 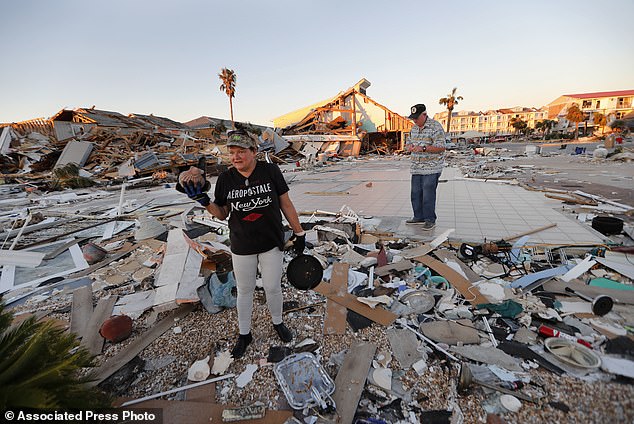 Lavonia Fortner helps her father-in-law, John E. Fortner, search for memorabilia his wife collected, in the aftermath of Hurricane Michael in Mexico Beach 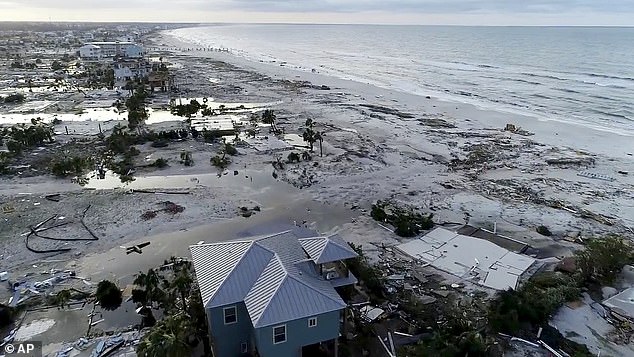 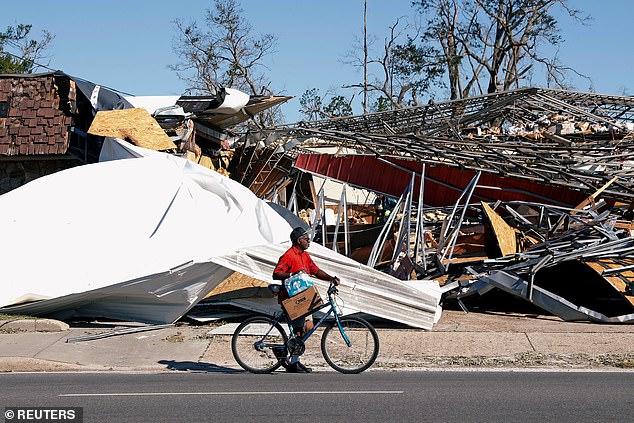 A man carries food and water past a building damaged by Hurricane Michael in Parker, Florida on Saturday