Florida husband arrested in wife’s disappearance thanks to texts

The estranged husband of a Florida woman who has been missing for three weeks was captured in New Mexico and arrested on murder and kidnapping charges, after investigators say he tried to cover up the crime by sending messages from his wife’s phone claiming she was hospitalized with the coronavirus.

David Anthony, 43, was charged last Tuesday in the disappearance of his wife, 51-year-old Gretchen Anthonty, who was last seen alive in Jupiter, Florida, on March 20.

The Anthonys have an open divorce case that was filed in late February, The Palm Beach Post reported. 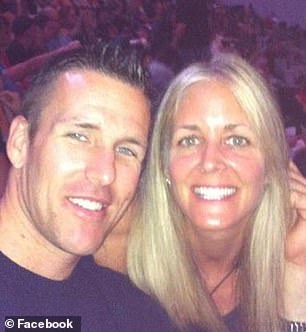 David Anthony, 43 (left), was arrested in Las Cruces, New Mexico, on charges of murder and kidnapping in the disappearance of his wife, Gretchen, 51 (right) 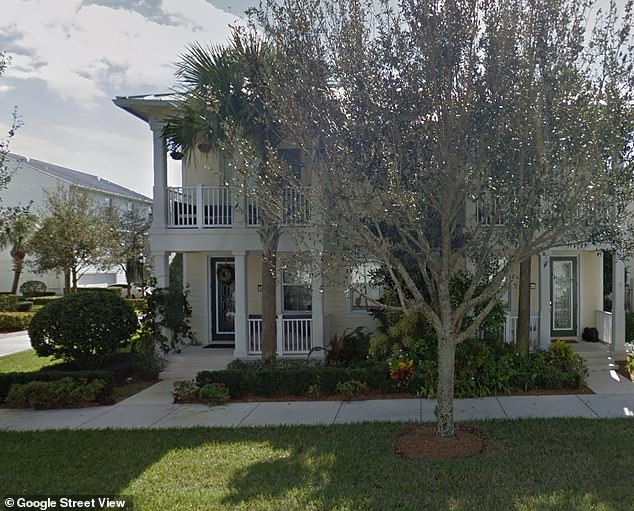 On March 21, a neighbor heard woman’s screams ‘No! No! It hurts!’ coming from the Anthony family’s garage on Sunshine Drive in Jupiter, Florida (pictured)

Five days before his wife vanished, David was arrested for violently resisting arrest after police received a report that he was ‘suspiciously’ approaching young girls near a public beach in Florida. He was released three days later after posting bail.

According to a statement from the Jupiter Police Department, on March 26 officers responded to the Anthony family’s home after Gretchen’s family reported her missing.

A cadaver dog was brought in and detected the smell of a dead body inside the residence. A search of the garage on the property turned up what appeared to be blood mixed with bleach, suggesting an attempt to clean up a crime scene.

Gretchen’s car, a dark blue Mini Cooper, was found in the parking lot of the Jupiter Medical Center, but there was no sign of the missing wife and mom-of-one.

During the investigation, police identified David Anthony as the prime suspect, accusing him of killing his wife on March 21.

According to an arrest report released by the police to CBS12, the case began unfolding on March 25, when a witness called them, saying that she two days prior she received a ‘suspicious text message’ from Gretchen, who wrote that she had COVID-19 and was being held by the US Centers for Disease Control and Prevention at Jupiter Medical Center. 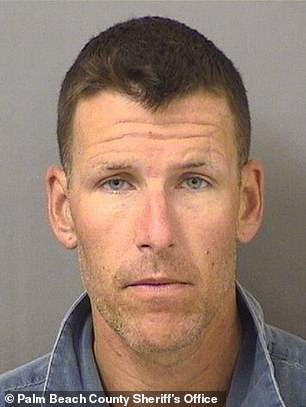 Five days before his wife vanished, David was arrested for violently resisting arrest after police received a report that he was ‘suspiciously’ approaching young girls

An officer was dispatched to the Anthony family’s home in the 1300 block of Sunshine Drive to perform a welfare check, but no one came to the door.

The cop then contacted the clinic in Jupiter to inquire after Gretchen, but was told there was no patient by that name there.

Police then got a call from another witness, who said that he got a text message from Gretchen on March 24, saying she was the at the medical center being treated for an ‘acute’ case of the coronavorus and was being taken to a CDC-affiliated center in Belle Glade, where she was ‘sedated’.

The second witness noted that the texts from Gretchen included language that was no typical for her, but which her husband, David, has been known to use.

Police then ‘pinged’ Gretchen’s phone, which placed it near Pensacola, where they say on March 25 David tried and failed to sell a bag of women’s jewelry, including what looked like his wife’s David Yurman-designed ring, at a local store.

The next day, one of the witnesses again called police, this time saying that her mother got a text from Gretchen, saying she was on a ventilator at Palms West Hospital battling the coronavirus, but police were unable to find her there. 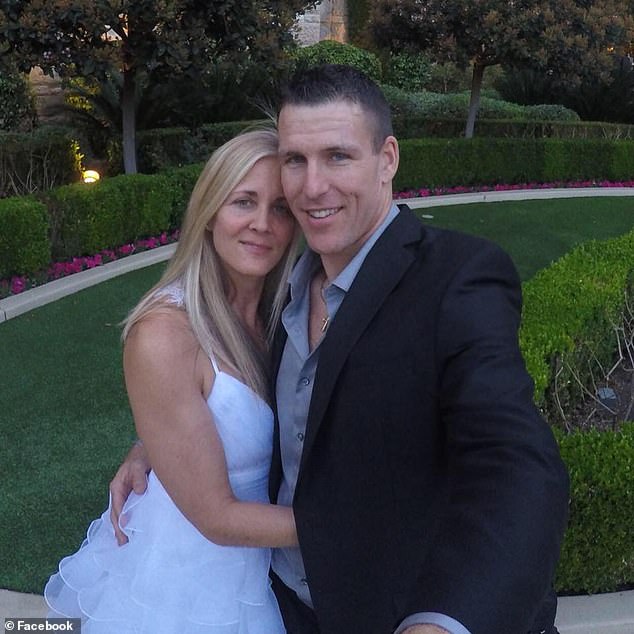 Police suspect David sent multiple people text messages from his wife’s phone, saying she was in the hospital battling an ‘acute’ case of the coronavirus 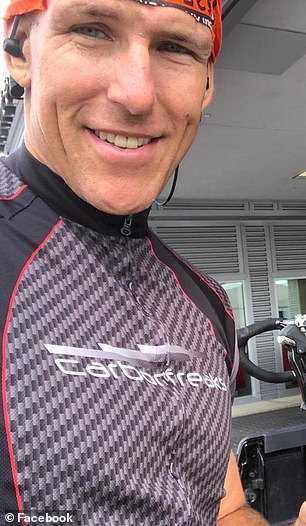 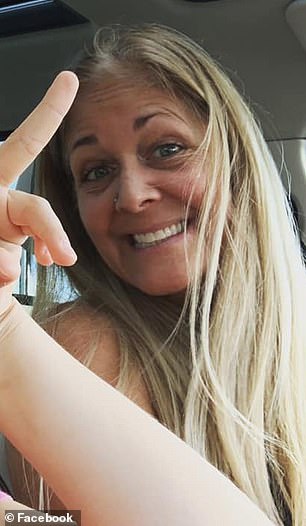 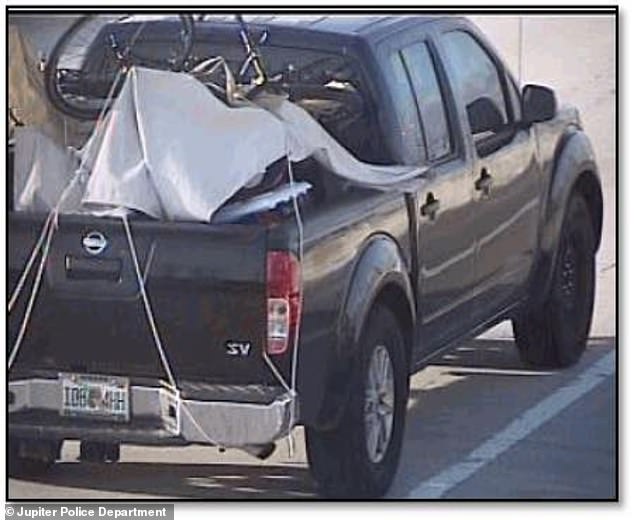 Police tracked down David’s Nissan Frontier pickup truck and searched it with a cadaver dog, which picked up the scene of a dead body

When detectives went back to the family’s home on March 26, a neighbor told them she head a woman’s blood-curdling ‘ scream on the morning of March 21. The woman, believed to be Gretchen, was heard yelling, ‘No! No! It hurts!’ from the patio or the garage area.

Another neighbor corroborated that account, adding the he saw David’s truck with the loaded up and covered with a tarp.

On Monday, the second neighbor said he saw someone using water mixed with a chemical to clean the garage.

When police entered the home, they found two bottles of cleaner and a rag, as well as towels in the washing machine stained with a ‘reddish substance’ that looked like blood.

Inside the master bedroom they found a broken glass picture frame and what looked like droplets of blood on the wall.

When officers forced their way inside the locked garage, they discovered a large bleach stain. A police dog was brought in to the scene and detected traces of blood on the floor. 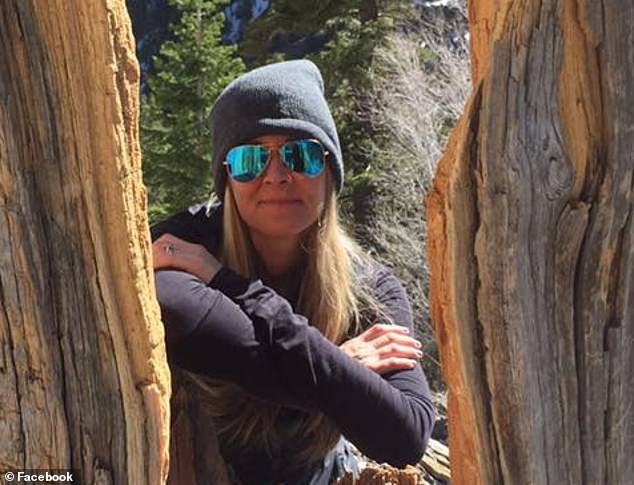 Police found what appeared to be blood in Gretchen’s home, but they still have not located her body

That same day, police learned that both David and Gretchen’s cell phones ‘pinged’ somewhere in Texas.

On March 31, detectives tracked down Anthony and his Nissan Frontier nearly 1,900 miles away, in Las Cruces, New Mexico, where he was arrested and charged with second-degree murder and kidnapping.

While processing his vehicle, a cadaver dog indicated the scent of a dead body inside.

As of Friday afternoon, Anthony remained in the Dona Ana County jail awaiting extradition back to Florida.