The University of Florida has dismissed quarterback Jalen Kitna from the football team following his arrest on child pornography charges.

The Gators revealed the decision Friday to ESPN days after the 19-year-old was accused of sending exploitative material over social media.

Kitna, the son of former NFL quarterback Jon, was initially suspended over the allegations, which the school called ‘extremely serious charges.’ He was released from jail Thursday on $80,000 bond following his arrest on Wednesday.

Jon, 50, said at Thursday’s pretrial hearing that he would bring Jalen back to live with him in Texas ahead of his trial. Jalen is prohibited from using the internet and cannot have unsupervised contact with minors as a condition of his release.

Jalen appeared in four games this season as a backup to starter Anthony Richardson.

A judge ordered Kitna not to have any unsupervised contact with minors and to not have any access to the internet. The collegiate athlete has also been suspended indefinitely by Florida’s football program following his arrest

Jalen Kitna was released from jail on $80,000 bond on Thursday after he was arrested on five child pornography charges that police said included images of a man having sex with a young girl.

Kitna sobbed into his hands when his parents addressed the court during a 75-minute appearance. Jalen Kitna was at the Alachua County Jail and on a closed-circuit feed when Jon and Jennifer Kitna stepped to a podium in the courtroom and promised they would supervise their 19-year-old son back home in Burleson, Texas.

Jon Kitna tapped his feet repeatedly and held hands with Jennifer throughout their son’s first court appearance. Jalen Kitna donned a green smock — different from the striped pants and tops other inmates wear — typically given to those being kept under close watch because of concerns about their welfare. His booking photo showed him in normal jailhouse attire.

‘He’s got a great family. He’s got good family support. He’s going to be well taken care of,’ one of Kitna’s attorneys, Caleb Kenyon, said outside the courthouse. 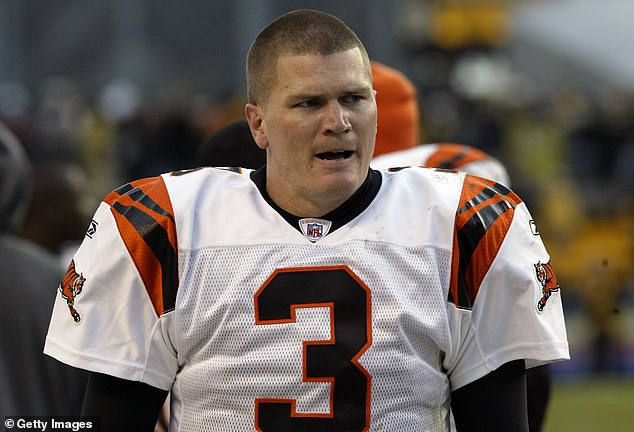 Jon Kitna (pictured) would supervise their 19-year-old son back home in Burleson, Texas 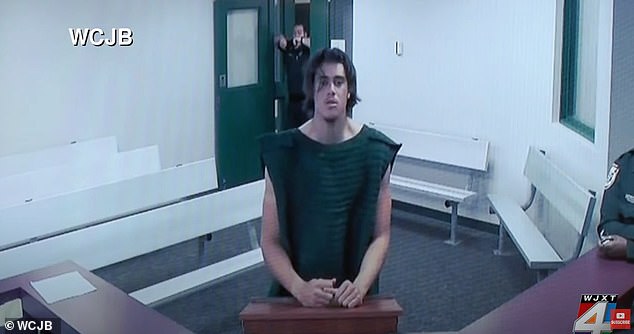 The investigation began in June with a tip from the National Center for Missing and Exploited Children into images of child pornography being shared on the social media platform Discord. The investigation led authorities to Kitna.

Kitna shared two images of a pubescent girl, police said in the report, adding that the phrase ‘so young junior’ was written on both pictures. Kitna told a detective he thought they were legal because he found them online.

When police searched Kitna’s phone, they found three more images of two nude pubescent girls in the shower, according to the report. Those three images were saved to his cellphone last December, police said. The report did not estimate the ages of the girls. 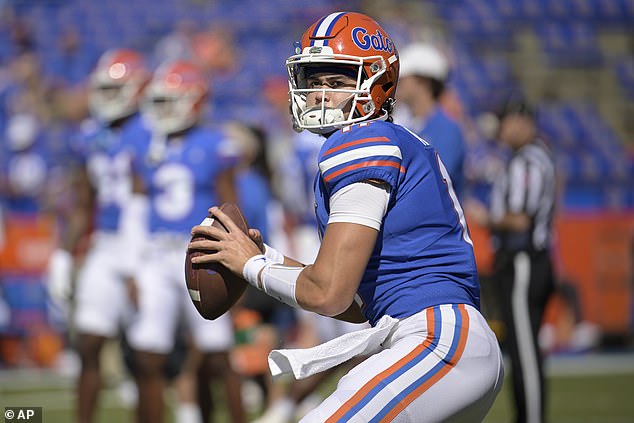 Kitna also told police he had been in other messaging groups on at least one other social media platform that distributed similar material, according to the arrest report.

Discord had previously deactivated Kitna’s account because of a violation of the terms of service, police said.

‘Discord has a zero-tolerance policy for child sexual abuse, which does not have a place on our platform or anywhere in society,’ a Discord spokesperson said in a statement released to The Associated Press. ‘We work relentlessly to find and remove this abhorrent content and take action including banning the users responsible and engaging with the proper authorities.’

Two of the five arresting charges, which still need to be formalized by the state attorney’s office, are second-degree felonies that could result in a prison term of up to 15 years and a fine of up to $10,000. The other three are third-degree felonies.

Kitna also is being represented by Gainesville attorney Ron Kozlowski as well as noted Jacksonville attorney Hank Coxe, who has a history of taking on cases involving high-profile athletes.

Kitna appeared in four games as a redshirt freshman for the Gators this season. He completed 10 of his 14 passes for 181 yards and a touchdown.

Jon Kitna played 14 seasons in the NFL with Seattle, Cincinnati, Detroit and Dallas. He started 124 games and now is a high school coach in Burleson, just south of Fort Worth. 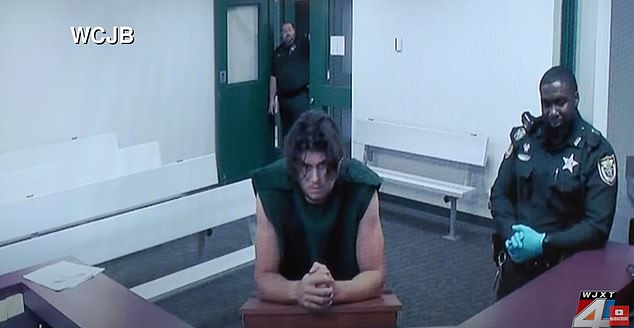 Kitna sobbed into his hands when his parents addressed the court during a 75-minute appearance. Jalen Kitna was at the Alachua County Jail and on a closed-circuit feed when Jon and Jennifer Kitna stepped to a podium in the courtroom and promised they would supervise their 19-year-old son back home in Burleson, Texas