Florida man, 56, KILLED after he was struck by two cars moments after being discharged from hospital

Man, 56, is KILLED after being struck by a van and then run over by another as he was trying to cross the street with a walker – just moments after being discharged from hospital

A Florida man who had just been released from a hospital was killed after being fatally struck by a van and then run over by another vehicle.

Albert Herbert, 56, was released from AdventHealth in Kissimmee shortly before he was killed by oncoming traffic on Tuesday.

Albert Herbert, who was recently discharged from a hospital, was killed after being struck by two cars in Kissimmee, Florida

The impact of the initial hit sent Herbert into northbound lanes where he was run over by a second car who fled the scene.

Florida Highway Patrol troopers reported the incident at 12.15am and pronounced Herbert dead at the scene.

Troopers are looking for the second driver. 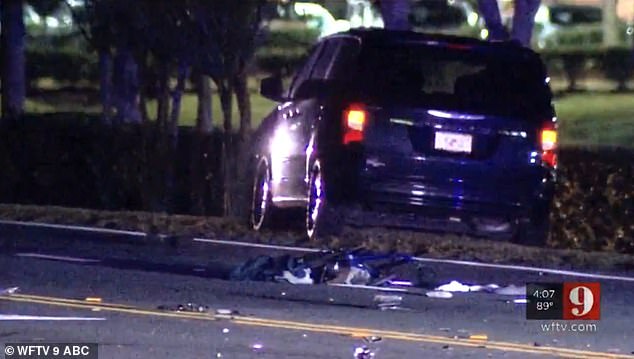 Lt. Kim Montes of the Florida Highway Patrol told WKMG: ‘(The driver) ran over him -never stopped, never called in, so we don’t really (have) any information about that vehicle.’

‘If you’re going to risk leaving the scene, realize there are people who are going to call these tips in and there’s possible surveillance videos.’

According to WKMG, Martinez was not injured and is not likely to face charges.

The unidentified driver who fled the scene will face felony charges.

Following the accident the road was shut down for hours while authorities investigated, WFTV reported.