Florida man, 58, shot dead by US Marshals and police after they say he exited his SUV with a gun

Police shoot dead armed suspect, 58, outside Florida mosque after ‘he broke into a house and nearly stabbed a woman to death’ – just weeks after he was released from jail for ‘threatening to pour boiling oil over his estranged wife’

Hamid Ould-Rouis, 58, was fatally shot by local and federal law enforcement officers who were serving a warrant Friday afternoon

A Florida man wanted for nearly stabbing a woman to death has been shot dead after police caught up with him outside a mosque.

Hamid Ould-Rouis, 58, who lived in Fort Lauderdale, was pronounced dead at the scene of the incident, according to police.

His shooting death occurred more than two months after he was arrested for shocking his estranged wife with a stun gun at her home in Kissimmee, Florida before heating a pot of boiling cooking oil on the kitchen stove and threatening to poor it on her face, court records show.

The disturbing domestic dispute unfolded as the estranged couple’s two children and the victim’s female friend looked on helplessly, according to a sheriff deputy’s report.

Rouis’ wife told investigators that she and her husband had been separated for about a year prior to the incident.

She declined to press charges against her husband, who was ultimately set free. 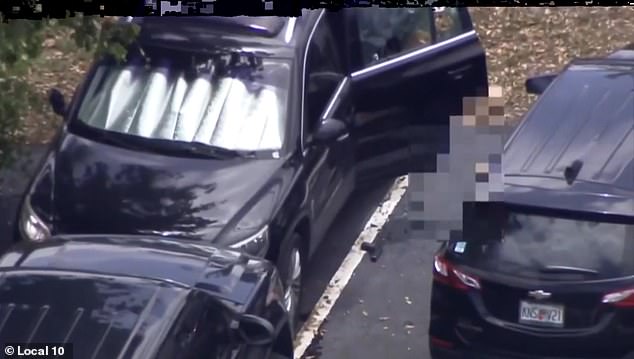 A US Marshals spokesman told reporters that Rouis was ‘brandishing’ a firearm Friday afternoon when police tried arrest him in the parking lot outside the Masjid Al Iman mosque near Fort Lauderdale, Florida. Local news helicopter cameras caught glimpses of the handgun next to the SUV after the incident

On Thursday, law enforcement officials said a warrant was issued for Rouis’ arrest after he brutally beat a man and stabbed an unidentified woman, possibly his estranged wife, during an early morning attack inside an apartment in the Integra Sunrise Park complex in Kissimmee.

Rouis’ alleged female victim, who’s identity has not been confirmed, remained in critical condition at a local hospital Friday night, according to Local 10.

US Marshals later found Rouis more than 200 miles away in the parking lot outside the Masjid Al Iman mosque near Fort Lauderdale, where federal agents and a group of officers from the Fort Lauderdale and Plantation police departments tried to arrest him Friday afternoon. 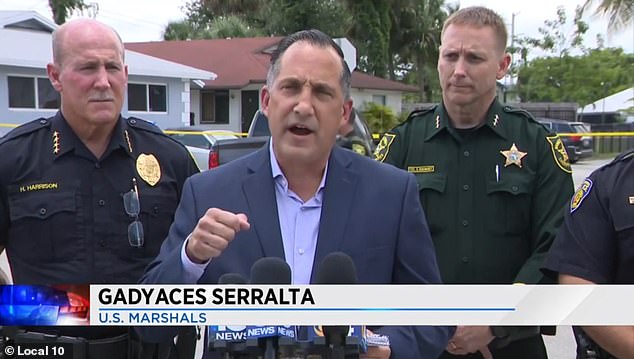 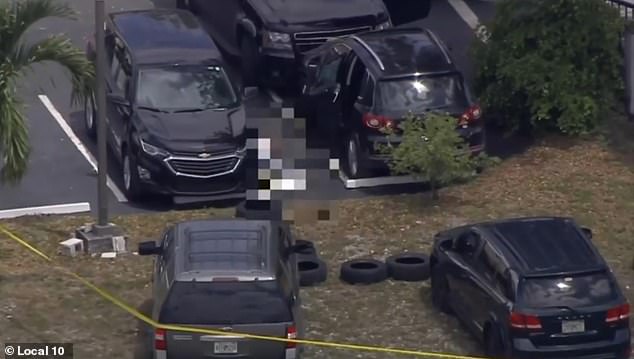 Rouis was wanted for the early Thursday morning assault of a man and attempted murder of his girlfriend inside their apartment in Kissimmee, Florida 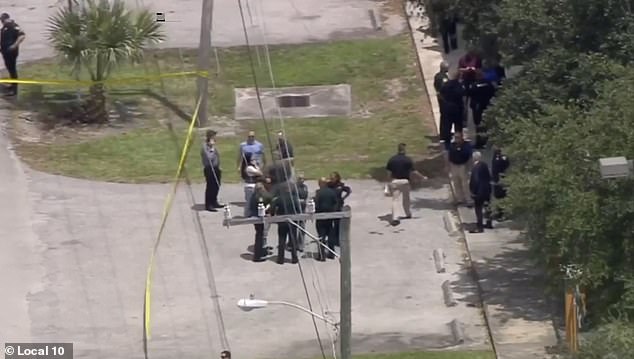 Marshals spokesman Gadyaces Serralta told reporters that Rouis was ‘brandishing’ a firearm when he got out of his vehicle. Multiple officers fired bullets at the suspect. None of the officers who responded to the incident were injured.

Local news helicopter cameras caught glimpses of a handgun next to the SUV after the shooting.

‘The taskforce members opened fire and unfortunately the suspect is deceased,’ Serralta said during a press conference after the shooting.

Authorities said Rouis does not appear to be affiliated with the Masjid Al Iman.

Council on American Islamic Relations Florida chapter spokesman Wilfredo Ruiz told the Miami Herald he has been in contact with community members at the mosque who said Rouis was not involved with their community.