An 18-year-old Florida gang associate who’s been arrested 11 times since he was 11 years old is behind bars again on several new felony charges after a detective reviewing his Instagram posts and text message records found cause to arrest him for possession of weapons, stealing a vehicle and plans to commit an armed home invasion robbery.

Volusia County Sheriff’s Office shared a home video of a bearded Vincent Shalkowitz brandishing firearms and making bullet firing noises with his mouth as he points the barrel towards the camera.

Another part of the compilation clip shows him driving with gun-toting friend Jeremy Jones, 18, and in one night-time instance, Jones says ‘let me tell you how a ‘n****r rocking right now’ before blasting the gun into the air and adding: ‘A n****r’ really living like that’.

Shalkowitz is heard complaining that the firing was ‘loud’ but it was sharing the footage on social media that ultimately got the pair in trouble. 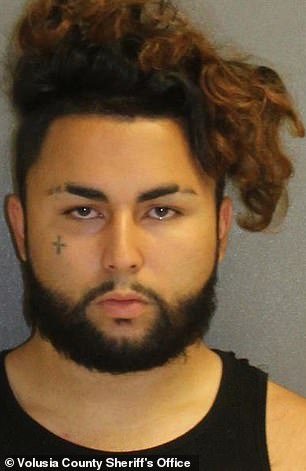 Vincent Shalkowitz, 18, was booked Thursday (left) for grand theft auto and on May 30 (right) was arrested for possession of a firearm by an adjudicated delinquent

Detective Jayson Paul recognized Shalkowitz driving a stolen sport utility vehicle and holding a handgun, with Jones also armed with a handgun that matched one reported stolen in DeLand in April.

Another June 26, 2017 post shows Shalkowitz holding an ankle monitor with the caption: ‘Fucc a Mike S**twood come get me if you can.’ It was accompanied by a pig and several arm muscle emoticons.

The Sheriff of Volusia County is named Mike Chitwood. On May 30, Shalkowitz was arrested on a charge of possession of a firearm by an adjudicated delinquent, possession of marijuana not more than 20 grams and possession of paraphernalia. Detectives executed a search warrant at his Orange City apartment.

Detectives found his cell phone and got an additional warrant to gather data from it, revealing several videos of Shalkowitz and Jones handling guns.

The phone also contained conversations between Shalkowitz and Jones discussing a stolen vehicle, a burglary spree and a detailed plan to rob a man and his girlfriend. 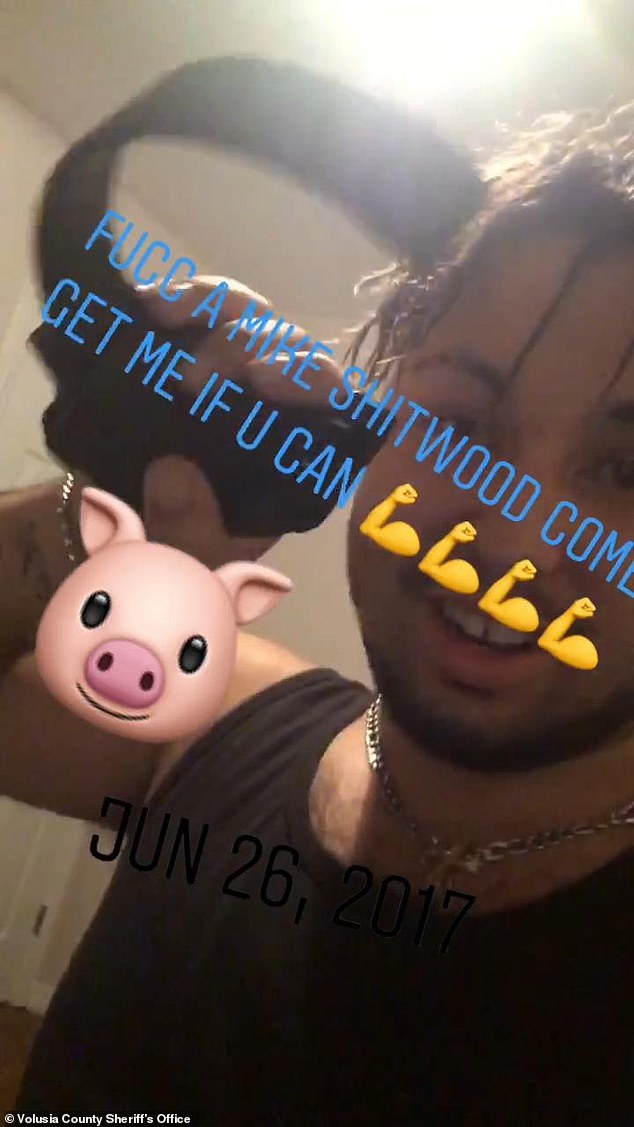 Both Shalkowitz and Jones face the charges. Shalkowitz is also charged with grand theft auto for the theft of the Nissan Xterra shown in his Instagram video.

He was booked on his new charges Thursday and held on $35,000 bond. Jones remains held without bond.

A Twitter account associated with Chitwood commented on Thursday: ‘Here’s a message from our friend Vincent Shalkowitz, whose hobbies include making a mockery of the juvenile justice system. He’s holding an ankle monitor that he cut off in 2017. He was arrested but never prosecuted. Just 1 more example of many. The system’s broken.’

Chitwood’s social media posts added about the gun videos: ‘I think these two just needed one more pat on the head when they were juveniles. God forbid they face any real consequences from our justice system.’

Shalkowitz’s string of arrests over the years comprise 21 felonies, including one robbery charge. He confessed to an April 24, 2017 robbery and provided names of his four accomplices.

The man who turned 18 in December was on probation from 2013 to 2019 but has never been sent to a juvenile commitment program.

His father appears to own Steve’s Auto Body Customs on Dixie Highway and responded to the arrest with a string of social media comments lashing out at people who criticized his son. In some instances the car shop owner threatened to go find commenters in his ‘big yellow hummer’, claiming ‘I know where you are LOL’. 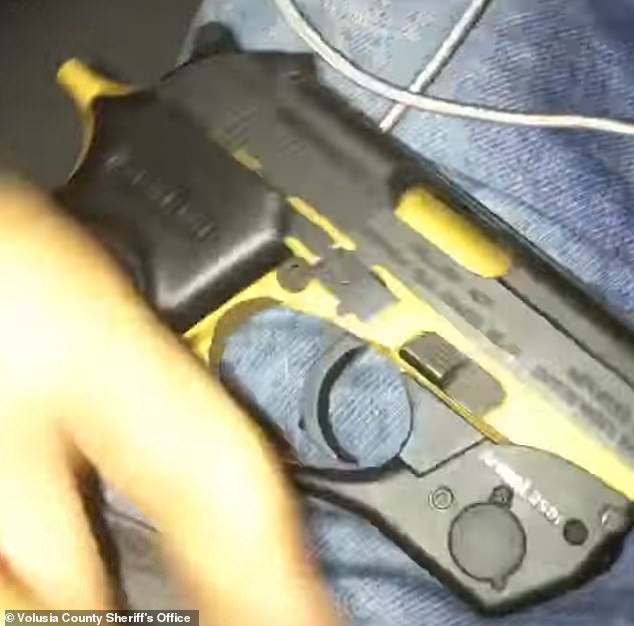 ‘One day with all of you people with your negative things to say about my son I hope in life you have situations with your family and someone dogs you to the curb,’ Steven Shalkowitz fumed. ‘Unfortunately the Deltona sheriff department should not share certain things to create such turmoil with everyone but this is what they like to do no respect for those pigs whatsoever.’

Vincent Shalkowitz’s friend Jones was arrested in connection to a string of car break ins and other crimes in DeLeon Springs last month. At the time he was held on $230,000 bail. 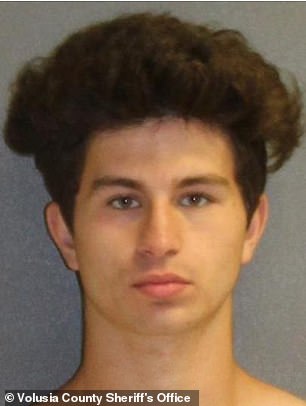 Jeremy Jones, 18, also appears in the clips and was arrested in June in relation to a string of car break ins and other crimes

The discovery of a stolen black 2015 Nissan Quest led sheriff’s detectives to a ‘treasure trove of stolen property belonging to multiple victims of area car breaks’ and, ultimately, to the suspect in a two-month crime spree.

On May 17 a locked 2015 black Nissan van was reported stolen from a DeLeon Springs home. The owner suspected the thief used a spare key stolen during a car break April 3 on the same vehicle.

A week later, the van was found abandoned on May 24 in a wooded area in DeLeon Springs. Responding deputies discovered multiple identification cards, purses, check books and a hard plastic gun holster all belonging to people other than the van owner, indicating evidence of additional crimes.

The investigation showed a 2011 red Chevrolet truck was broken into on April 3 from the same address in Deleon Springs.

On May 17, a 2004 tan Mercury car and a 2015 black Ford SUV was broken into in DeLand. May 18, a 2014 white Toyota truck was burglarized in DeLand and the same a Glock 19 firearm was stolen and in Pierson a 2018 Ford truck was broken into, prompting an armed burglary charge. May 19, a 2007 black Honda Pilot was taken from Seville.

At some point within the two-month spree, Jones stole a 2014 gray Jeep Compass from DeLand, according to detectives who conducted interviews.

Through statements made and evidence collected, the investigation showed Jones committed the vehicle break-ins and van theft and Crime Suppression Team members arrested him at home just after 2am on June 7. 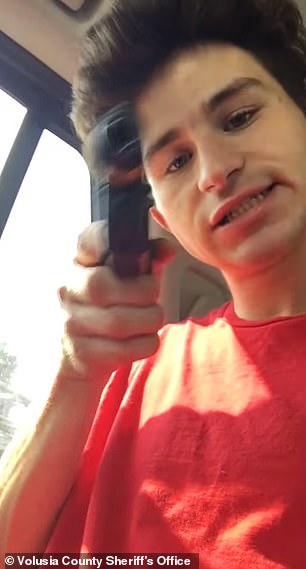 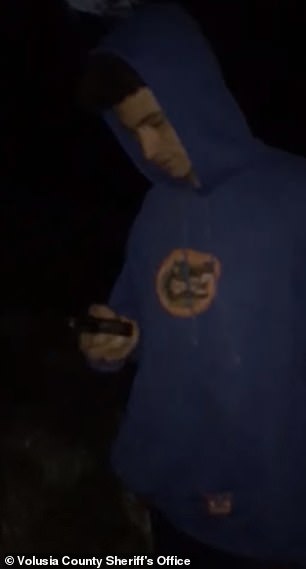 In video clips posted on social media, Jones waves around guns while riding in stolen vehicles and in one case (right) fires the gun into the air and says: ‘A n****r’ really living like that’