A Florida man claims a disgruntled McDonald’s employee poisoned his drink by spiking it with a bleach pod.

Lee Graves, 41, passed through the drive-thru of a Jacksonville McDonald’s where he asked for a large Coke, but things went south when he told his server he was mistakenly given a small.

That’s when she mumbled something and gave him the large sized drink that began to furiously bubble ‘like a volcano’ and spill all over his car on Thursday morning.

Graves then took several big gulps and became concerned when he tasted chlorine.

Lee Graves, 41, claims a McDonald’s employee spiked his drink with bleach after he was given a chlorine-tasting Coke as he passed through the Jacksonville drive-thru on Thursday 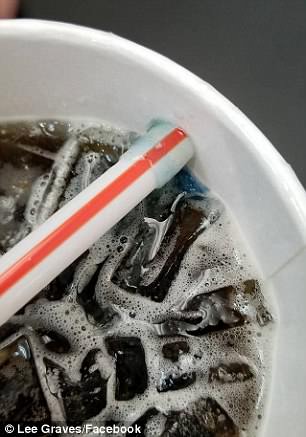 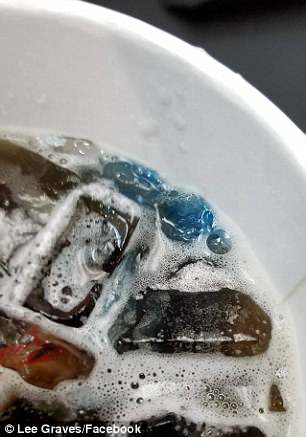 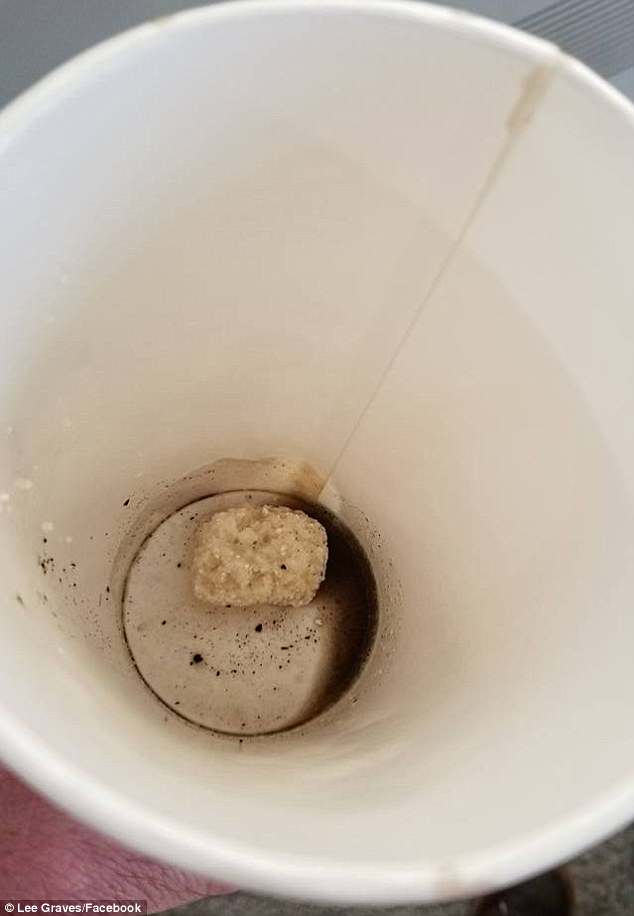 At the bottom of the cup he found this, which he believes to be the shell of a bleach pod

In the cup he found blue gunk and at the bottom a suspicious white tablet.

‘The girl hands me a small Coke, and as I’m talking on the phone, I politely whisper to her, “Ma’am, I ordered a large. This was supposed to be a large Coke.” Well, she mumbled something, and I could not understand what she said. She shut the window,’ Graves said to WSFA.

‘As I’m leaving the parking lot, the Coke just starts to explode everywhere. It erupted like a darn volcano that’s a science experiment that a kid would do… My initial response was it’s spewing all over my brand new truck… so I grab it, and I take a couple of gulps to stop it from foaming,’ he said.

‘My initial impression was that it tasted like chlorine,’ he added.

Sure enough, by the time he reached the bottom of the drink, he claims he found a square-shaped tablet, the shell of a bleach pod used for cleaning restaurant machines.

He said he felt so ill he went to the hospital where he got an IV.

‘The doctor… called McDonald’s personally, and McDonald’s told him there are two blue substances at the restaurant. There’s blue latex gloves, and they said that they use a blue bleach pod to wash their towels. So, that’s what we assume it was was a blue bleach pod, and that’s what the hospital treated me for was bleach and chlorine poisoning,’ Graves said. 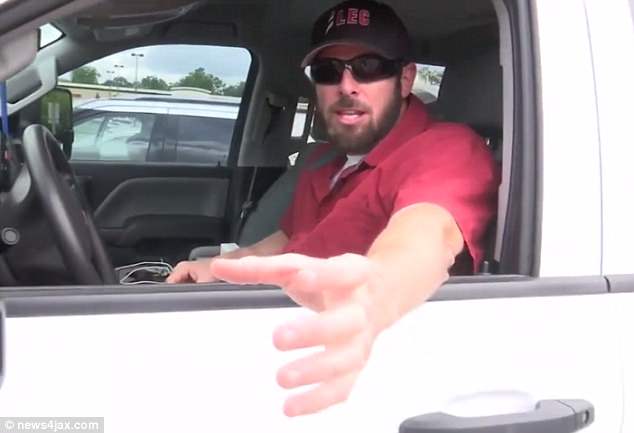 Graves, above, says he politely told the employee ‘Ma’am, I ordered a large. This was supposed to be a large Coke’ when she mumbled something and walked away 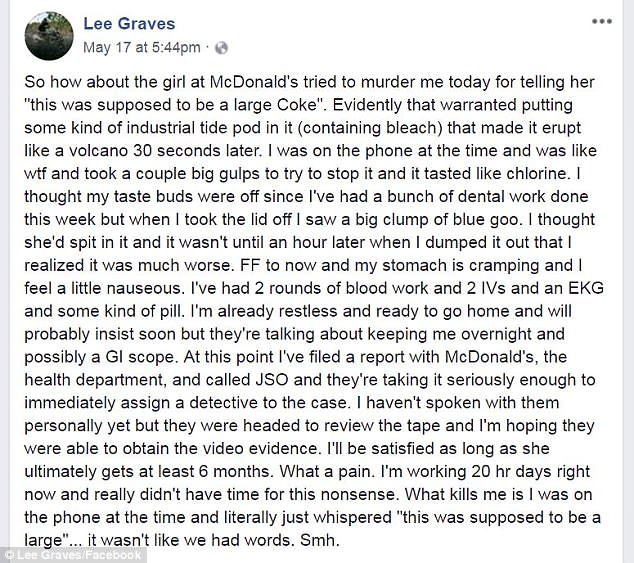 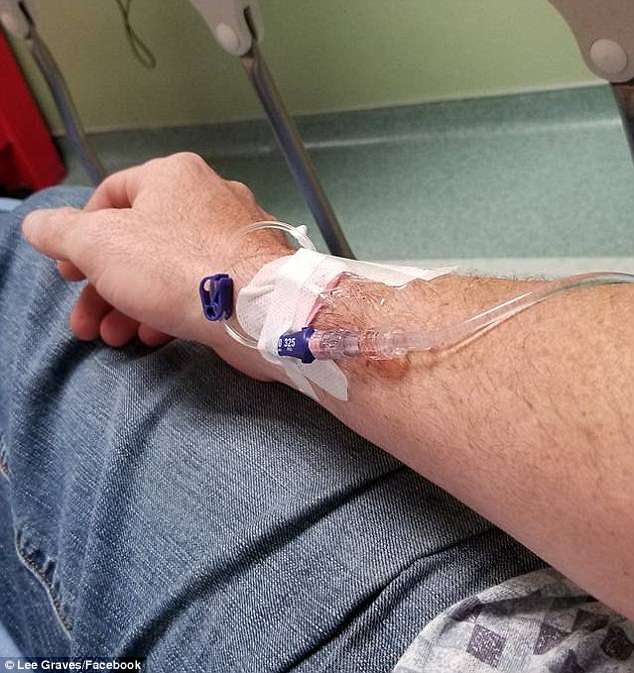 He said that the hospital treated him for bleach and chlorine poisoning, his IV pictured above 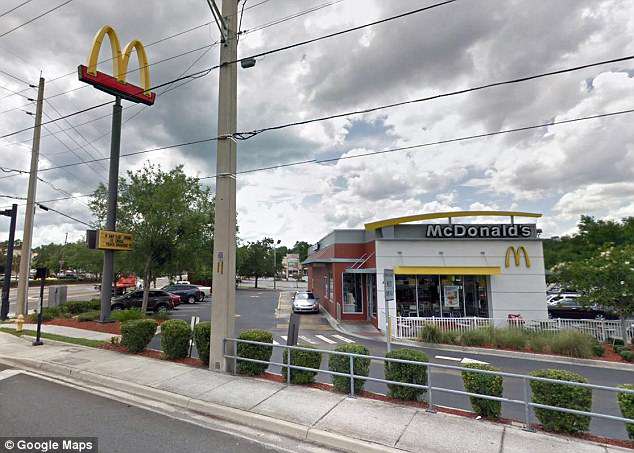 The incident took place at this McDonald’s in Jacksonville, Florida on Thursday

He took to Facebook to fume about the incident where he believes he was intentionally spiked.

‘So how about the girl at McDonald’s tried to murder me today for telling her “this was supposed to be a large Coke”. Evidently that warranted putting some kind of industrial tide pod in it (containing bleach) that made it erupt like a volcano 30 seconds later,’ Graves wrote.

‘I thought my taste buds were off since I’ve had a bunch of dental work done this week but when I took the lid off I saw a big clump of blue goo. I thought she’d spit in it and it wasn’t until an hour later when I dumped it out that I realized it was much worse,’ he added.

‘FF to now and my stomach is cramping and I feel a little nauseous. I’ve had 2 rounds of blood work and 2 IVs and an EKG and some kind of pill. I’m already restless and ready to go home and will probably insist soon but they’re talking about keeping me overnight and possibly a GI scope,’ he said. 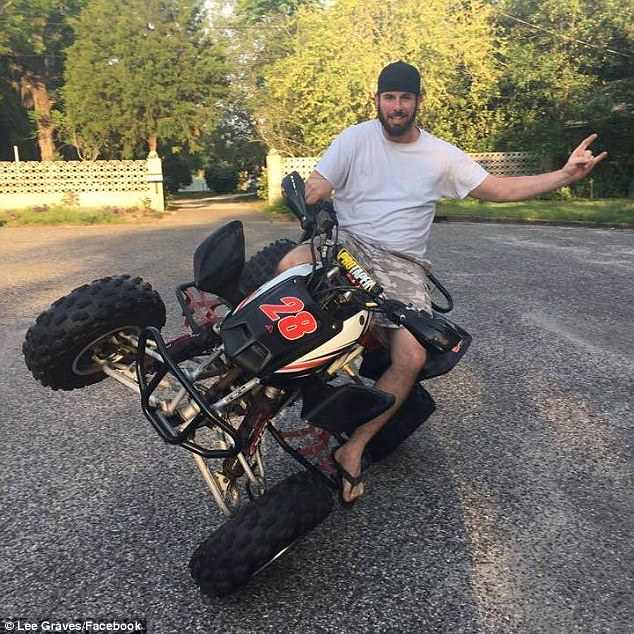 Graves, pictured, has filed a police report and said on Facebook he hopes the employee gets ‘at least 6 months’ in jail for allegedly poisoning him

He said that he’s hoping to find video evidence to see if the pod was intentionally placed there.

‘I’ll be satisfied as long as she ultimately gets at least 6 months. What a pain. I’m working 20 hr days right now and really didn’t have time for this nonsense,’ he said.

After the bleach incident he filed a police report at the Jacksonville Sheriff’s Office.

The McDonald’s manager told police the restaurant used cleaning pods only to clean the Frappuccino machine.

However the employee said she did not put anything into the drink, but acknowledged mistakenly giving him the wrong size.

She added she only touched the soda to put the lid on, adding that she wasn’t upset about Graves’ correcting her order blunder.

The McDonald’s restaurant, located at Blanding Boulevard near Wilson Boulevard, is investigating the incident.

The Florida Division of Hotels and Restaurants is also looking into the case.