Batman has been spotted flying over Florida – but rather than catching criminals, the caped crusader is busy transporting cats and dogs to their ‘furever’ home.

Pilot Chris Van Dorn, 26, regularly dresses up as the superhero icon to help rescue animals in need of loving homes.

Along with his sidekick pup Robin (aka Mr Boots), the Florida man operates his own charity Batman4Paws , delivering animals to their new homes all across the country.

Hero: Pilot Chris Van Dorn, 26, combined his lifelong obsession with Batman with his love for animals when he began operating pet rescues in his superhero costume via plane 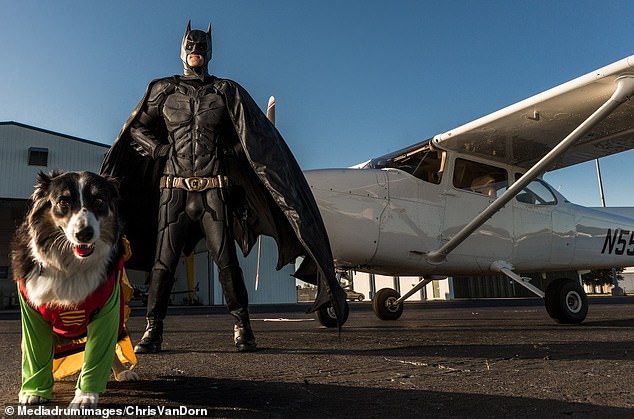 Sidekick: Chris aka Batman is assisted in his pet rescues by his own pup Mr Boots, pictured, who is regularly seen dressed like Robin 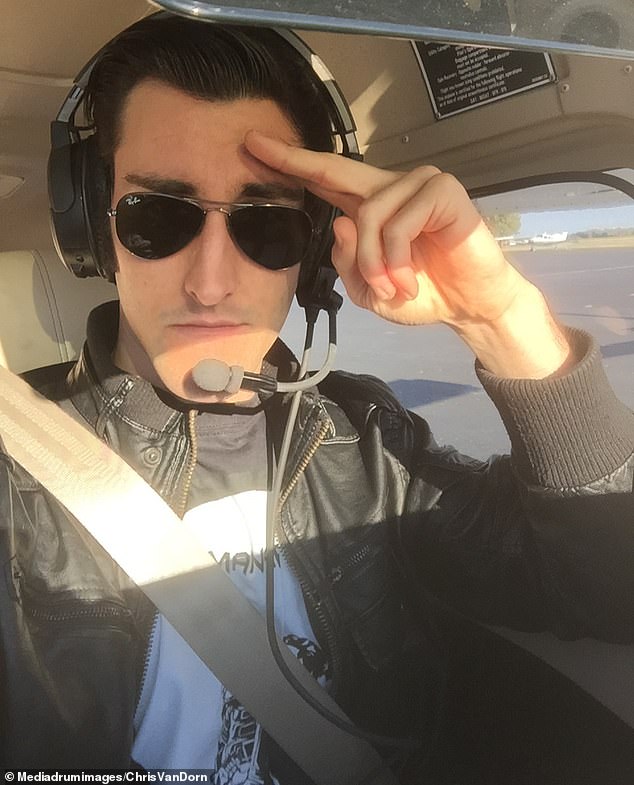 License: Chris, pictured, qualified as a pilot around 2014, when his family adopted Mr Boots from Alabama

His penchant for dressing up in a cape came after his family adopted Mr Boots in 2014 and saw firsthand the hard work of the volunteers who had saved the pooch from an uncertain fate.

Chris was inspired to start his own not-for-profit charity, combining his love of animals, flying and his childhood icon.

‘It all started around 2014 when my dad decided to adopt a rescue dog called Mr Boots on account of his big old paws. He was transported to us by a pilot,’ explained Chris/Batman.

‘Mr. Boots’ story inspired me to want to give back and help other animals in need too. It took me some major thinking while in the shower but it finally hit me and I came up with a way of taking my ability to drive as well as my passion of flying, and combine it with my love of animals.’

At the time of Mr Boots’ arrival, Chris had just achieved his private pilot’s license and decided to put his new skills to good use by transporting dogs, cats and other animals to their new homes or no-kill facilities. 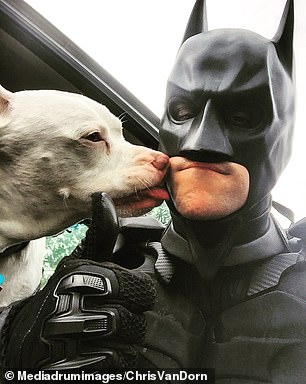 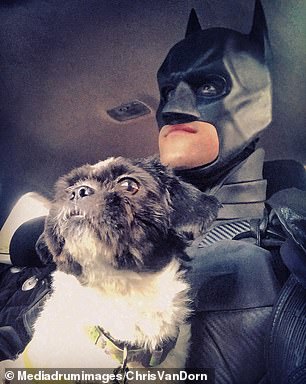 Getting the job done: When he’s not flying to rescue various animals, Chris will collect them in his vehicle 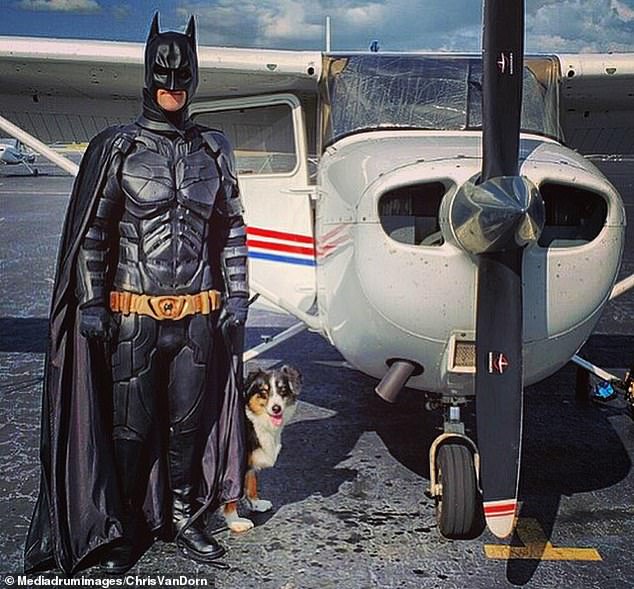 While he mainly operates in Florida, where he lives, he also does out-of-state deliveries all across the United States.

And while he will drive his silver two-door Honda Civic ‘Batmobile’, he does prefer to fly whenever possible.

‘I would help rescue animals in need any way I can, all while dressed as the Dark Knight himself and becoming a symbol for helping those in need.’ 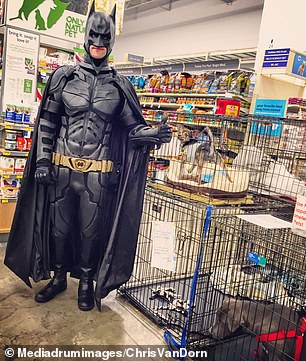 Batline: The busy animal lover can be contacted via email, phone or social media to arrange deliveries

It also turns out Chris’ loyal sidekick Mr Boots has an interesting backstory of his own.

‘It just so happened that this Australian Shepherd was no ordinary Aussie,’ Chris said. ‘He was found wandering around the woods in Alabama emaciated and covered in fleas and ticks.’

‘With the help of Dog Liberator [a rescue service] and another non-profit named PilotsnPaws, they organised and facilitated the transportation and rescue of this scruffy looking pooch to me,’ he recalled.

The efforts of these charity initiatives would ultimately inspire Chris to begin his own venture.

‘It was their hard work, especially pilot Jeff Bennett’s, that inspired me to start my own charity last year.

‘Mr. Boots rescue story really inspired Batman and seeing the harsh depressing reality that shelter pets have to go through everyday, often times being put down at no fault of their own, are what motivate me to want to do my best to find cats, dogs, and other animals’ homes.’ 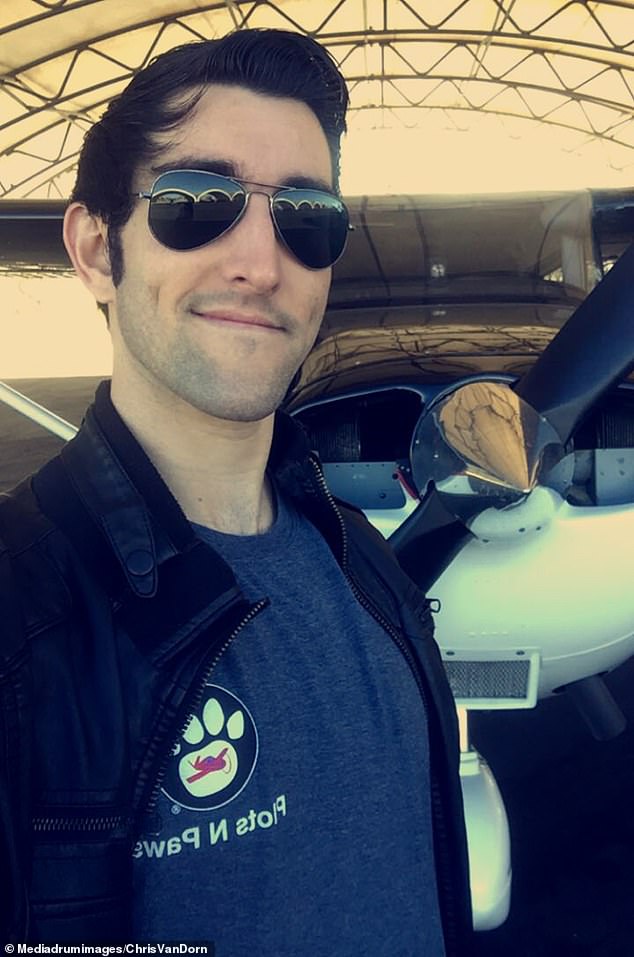 Passion: Pilot, animal lover and superhero fan Chris, pictured, found a way to combine his three favorite things when he set up his rescue charity 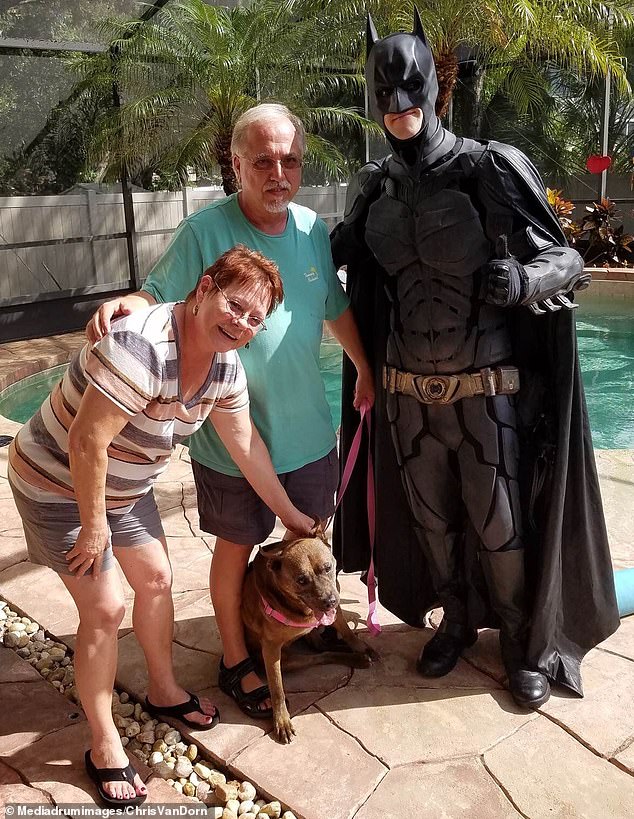 Happy customers: The Florida-native has performed animal deliveries all over the country 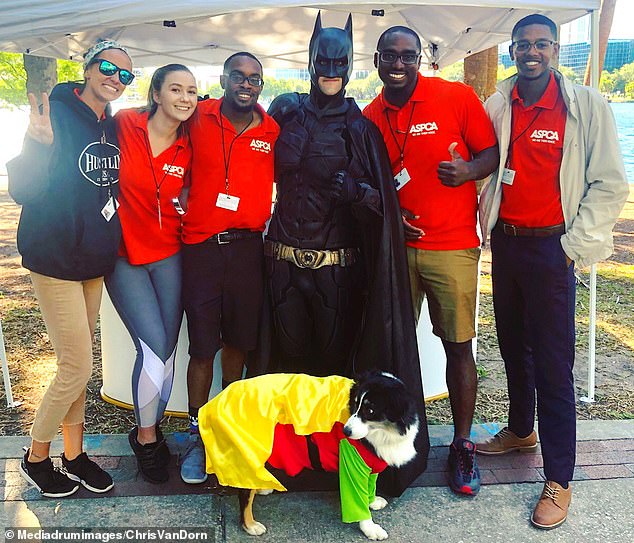 Support: ‘Batman’ and ‘Robin’ pictured with volunteers of the American Society for the Prevention of Cruelty to Animals Florida branch

Chris also offered the following mantra: ‘Start where you are, use what you have, and do what you can to be the change!’

As he works weekends, Chris mainly does animal deliveries on Monday, Tuesday and Wednesday. On his website, he lists hopeful rescue families can contact him via email, phone or social media.

Once paperwork is in order – animals need a CVI (Certificate of Veterinary Inspection) to cross state lines legally – Batman arrives via plane or car to pick up the animal and transport it safely.

The cape-wearing animal lover is an ARPA (Animal Rescue Professionals Association) certified animal transporter and is also fully insured with Pet Care insurance. His service relies on the donations, kindness and generosity of the people he services.

‘It’s a great feeling to serve my community and there’s plenty more to do. My motto is ‘til every cage is empty,” Chris proudly said. 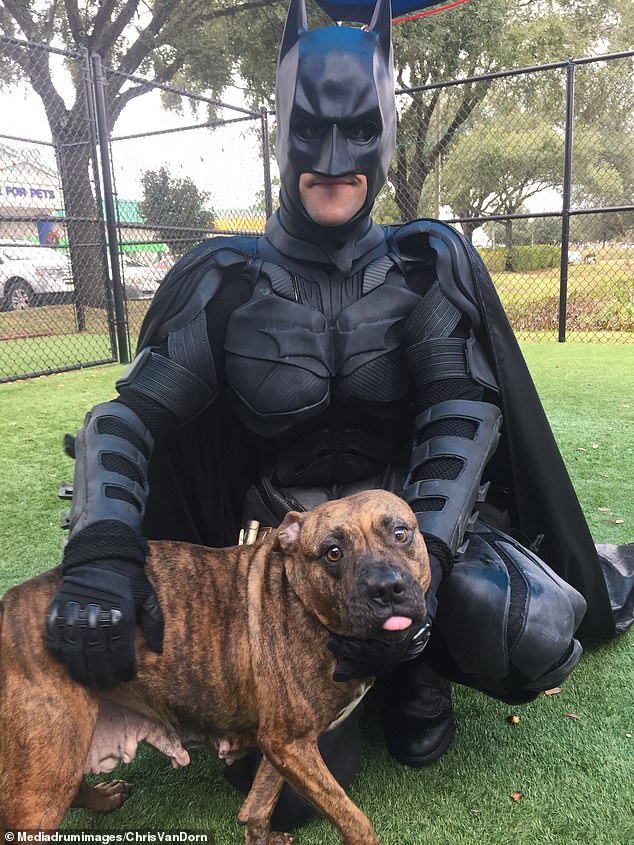 Dark Knight: Chris in his Batman guise with a rescue dog he helped transport Man’s best friend: Mr Boots, pictured dressed as Robin, has his own inspiring back story as he was rescued after being abandoned in the woods in Alabama 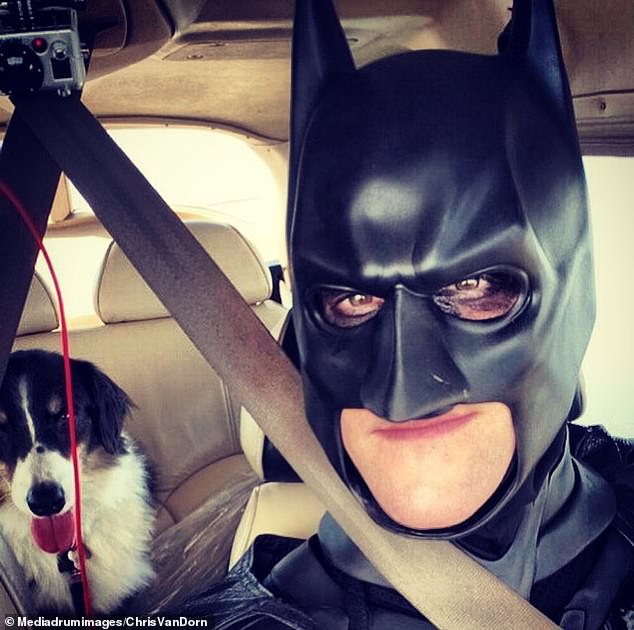 Delivery! Batman makes sure pets get to their destination safe and sound – and ensures their owners have a smile on their face when they see his hero costume