Florida man filmed dragging alligator across highway with his ATV

This is the shocking moment a Florida man lashed an 8ft alligator to the back of an ATV before dragging the animal across a highway.

Video circulating on Snapchat shows the man securing a rope, which is already tied around the animal’s midriff, to the back of the red vehicle before taking off.

The alligator can be seen thrashing around as it is dragged at speed across the road. 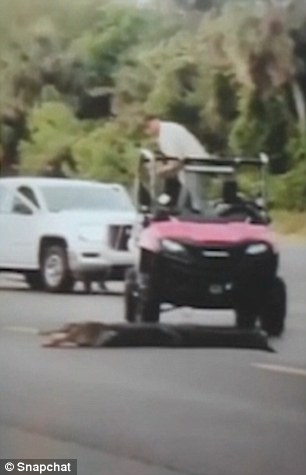 The footage caused outrage after it was posted on Facebook, with one person writing: ‘Today’s Gator Story, wherein a gator meets a truly dangerous and ruthlessly savage creature: A Floridian.’

‘I hope the outrage from this video absolutely destroys the [person] responsible for this horrific act of cruelty as it’s doubtful our laws will be able to do much of anything,’ another said

The incident has been reported to the Florida Fish and Wildlife Conservation Commission, with officers saying they have spoken to the man involved.

However, he is not being charged as of yet while officers try to determine what happened, WFTV reports. 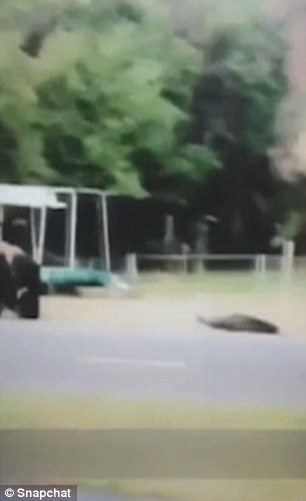 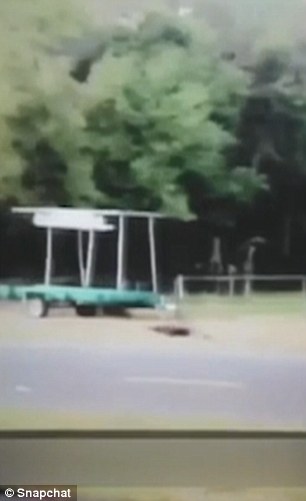 There was outrage at the footage after it began circulating online, with one commentor calling it ‘a horrific act of cruelty’

Spokesman Chad Weber said: ‘We are going to go through appropriate channels, collect all the evidence and present a package to the state attorney’s office and allow them to work through that.’

It comes after three men were filmed dragging a shark behind their boat in Florida.

Social media outrage over the footage led to the identification of those responsible as Michael Wenzel, 21, Spencer Heintz, 23, and Robert Lee Benac, 28.

They have since been charged with aggravated animal cruelty, a felony offence, while Wenzel and Heintz will also face a misdemeanor charge of illegal method of take-shark.