A mother who beat her 22-month-old child almost to death alongside her husband and recorded the abuse has been sentenced to four decades behind bars.

Amber Hall, 26, from Florida, was sentenced to 40 years in jail on Tuesday after pleading no contest to aggravated child abuse and neglect charges.

The court heard that Hall’s daughter had to be placed into a medically induced coma after one beating, suffered permanent brain damage, and now uses a feeding tube.

Amber Hall, 26, has been sentenced to 40 years in jail after torturing her 22-month-old daughter alongside her husband and filming the abuse

Hall carried out the attacks alongside 35-year-old husband Harold, who is not the girl’s biological father, and the pair photographed and video-taped the abuse.

Some images showed the girl with her hands bound and tape over her mouth.

‘The videos are beyond disturbing, they enter the realm of a child’s most frightening nightmares,’ lawyer R.J. Larizza said in remarks reported by the Orlando Sentinel.

Police were alerted to the abuse after the girl was taken to Arnold Palmer Hospital in September last year with missing teeth, burns and bruising all over her body.

The girl was also suffering from a brain injury. Hall and her husband were arrested the following month.

In June he pleaded no contest to child abuse and to another charge robbing a Sunglasses Hut while wearing a mask during Hurricane Irma.

He will serve the first 15 years in a reoffender institute because of his prior record, WNDB reported without saying what those priors were.

Jeannie Hudson, the toddler’s paternal grandmother, told WESH 2 News after the sentencing: ‘It won’t bring our baby back.

‘She deserves everything she gets while she’s there. There are no winners here.’ 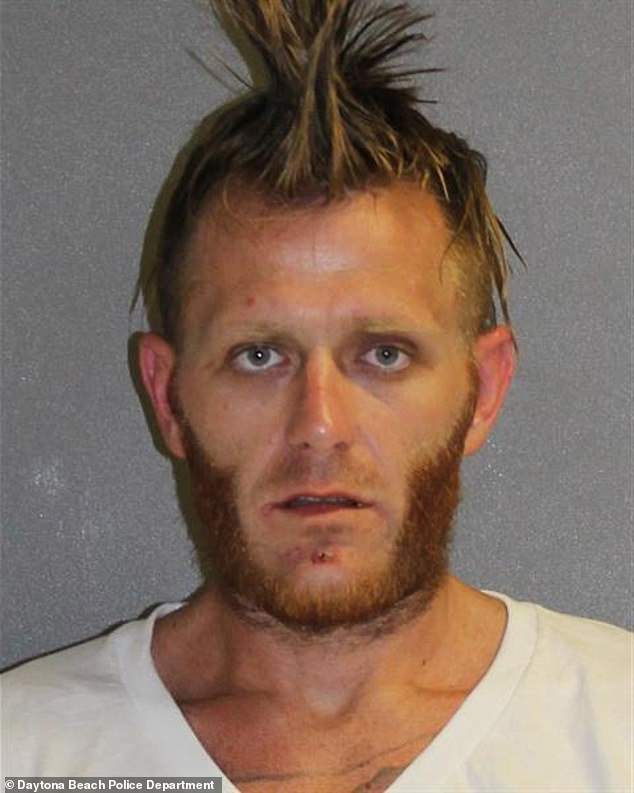 Harold Hall, 35, was sentenced to 25 years for his part in the abuse back in June, and also for robbing a shop during Hurricane Irma