Thamyres Pounce, 32, was charged with one count of child neglect for allegedly leaving her two-year-old daughter alone inside her car in a Florida mall parking lot

A Florida mother was arrested after she left her two-year-old daughter in her sweltering car while she shopped at a mall on a hot July day.

Thamyres Pounce, 32, was charged with one count of child neglect, according to the Palm Beach County Sheriff’s Office.

Deputies were called to The Mall at Wellington Green at 4.14pm on Monday after a bystander spotted the child locked inside a white Nissan.

The little girl was strapped into her car seat in the back seat, sweating, crying and seemingly in distress, according to an arrest report.

One deputy broke a window and removed the child. Paramedics found she had a temperature of 102 degrees. She was treated at the scene and expected to be fine, according to the report.

The arrest report said Pounce left the child in the car while she shopped in Macy’s for about 25 minutes.

Temperatures in Wellington were in the mid-90s on Monday. According to scientific data, on a 95-degree day it would take 30 minutes for the temperature inside a vehicle to reach a scorching 129 degrees.

Pounce was released on $1,000 bond on Monday night. According to court records she had no previous criminal history. 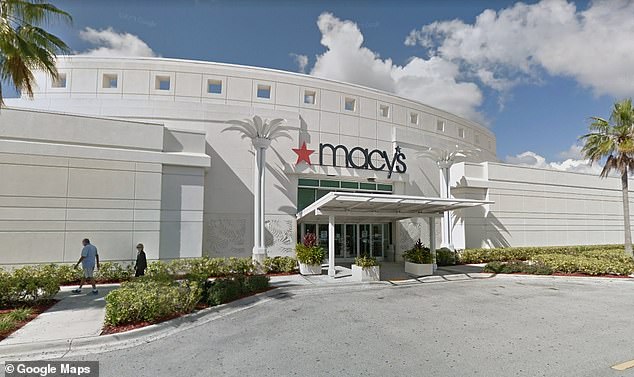 Pounce left the child in the car while she shopped in Macy’s at the Mall at Wellington Green in Wellington, Florida, for about 25 minutes

‘We can’t stress enough how important it is not to leave your children or pets in the car,’ the sheriff’s office said in a press release. ‘We see it way too often.’

According to the advocacy group KidsAndCars.org, there have been nine hot car deaths involving children in the US so far this year, including a 10-month-old who perished in Florida in May.