A Florida police officer was fired on Monday after arresting two six-year-olds last week, including a little girl he accused of battery when she threw a temper tantrum.

Officer Dennis Turner arrested the children on Thursday while working as a resource officer at a charter school in Orlando, charging them both with misdemeanor battery, Florida State Attorney Aramis Ayala told a news conference.

Kaia Rolle was handcuffed and taken to juvenile detention after the incident at Lucious & Emma Nixon Academy, her grandmother claims.

Police Chief Orlando Rolón told a separate news conference on Monday: ‘It was clear today when I came into work that basically there was no other remedy but to terminate this officer.’

Orlando police school resource officer Dennis Turner, shown during his 2018 retirement ceremony. has been fired for arresting the two children

State Attorney Ayala said Rolón told her he did not intend to prosecute the children and had asked for the charges to be dropped. She said she was looking into removing the arrests from the children’s records.

‘These very young children are to be protected, nurtured, and disciplined in a manner that does not rely on the criminal justice system to do it,’ Ayala said. ‘Systems are not designed to raise our children.’

Turner, who had earlier been suspended over the arrests, could not be reached for comment.

Rolón said in a statement that Turner did not obtain the approval of a commanding officer before making the arrests, as department policy requires for children under the age of 12,

The grandmother of one of the children told Orlando television station WKMG she was outraged when she heard her 6-year-old granddaughter had been arrested. 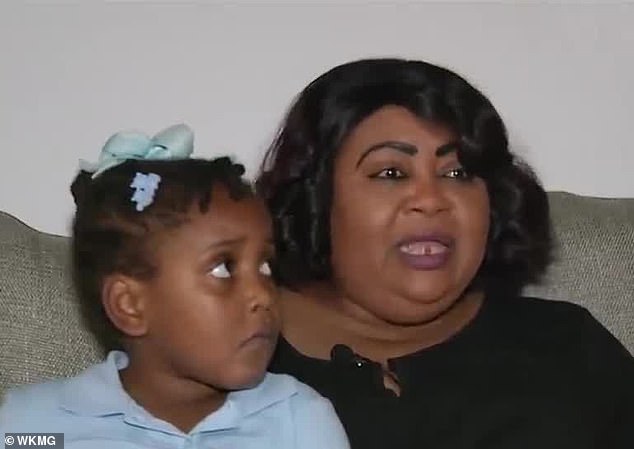 The identity of the 6-year-old, Kaia Rolle, was made public when Meralyn Kirkland, came forward to say she was the child’s grandmother. Kaia and Kirkland are pictured above.

‘How do you do that to a 6-year-old child?’ Meralyn Kirkland told WKMG.

Kaia, according to her grandmother, was acting out in class and taken to the school office where she ‘kicked somebody.’

A school staff member had grabbed the young child’s wrists in an attempt to calm her down, and she responded by lashing out and kicking at the person.

That’s when Turner made the arrest. Kaia was handcuffed and put her in the backseat of a squad car, her grandmother said.

Kirkland said Kaia had thrown a tantrum at the Lucious & Emma Nixon Academy (pictured above) she has sleep apnea, and that she told the arresting officer the family was ‘working to resolve’ the sleep disorder.

‘How do you do that to a 6-year-old child?’ said Meralyn Kirkland, expressing her outrage after she said her granddaughter was handcuffed, placed in the backseat of a patrol car and taken to a juvenile detention center (shown above)

‘She’s charged with battery,’ the grandmother says. ‘No 6-year-old should be able to tell somebody that they had handcuffs on them, and they were riding in the back of a police car and taken to a juvenile detention center to be finger-printed and mug shot.’

Kirkland said Kaia had thrown a tantrum at the school because she has sleep apnea, and that she told Turner the family was ‘working to resolve’ the sleep disorder.

‘Well I have sleep apnea and I don’t behave like that,’ the grandmother recalled the officer responding when they spoke about the incident and how it was being handled.

Speaking earlier on Monday, Rolon said: ‘The Orlando Police Department has a policy that addresses the arrest of a minor and our initial finding shows the policy was not followed.

‘As a grandparent of three children less than 11 years old this is very concerning to me.

‘Our Department strives to deliver professional and courteous service. My staff and I are committed to exceeding those standards and expectations.’

The other child arrested was a 6-year-old boy. No further details were available on him.

Rolón said he had authority to terminate Turner even before the investigation had concluded into the two arrests because Turner served as a reserve officer.

Ayala said Florida led the country in arrests of children aged 5 to 10 when she took office in 2017 but that those arrests had declined in the state since then.