Police have launched an investigation after they were called to the scene of an apparent hanging to find a mannequin wearing a pig mask and cop uniform.

The dummy was hanging from an overpass on the I-95 in Jacksonville, Florida on Saturday.

When officers arrived on the scene around 6am, they discovered that it wasn’t a suicide as expected.

The mannequin was wearing an NYPD uniform, according to First Coast News.

The dummy was hanging from an overpass on the I-95 in Jacksonville, Florida on Saturday 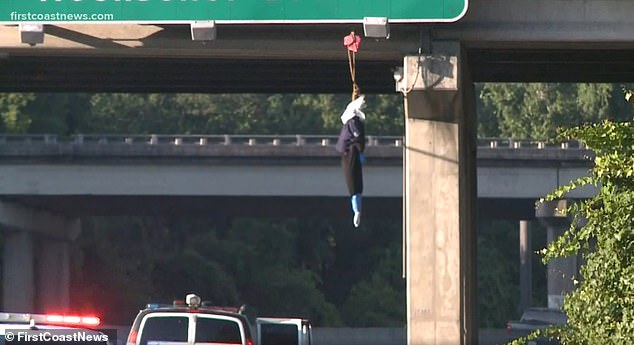 When officers arrived around 6am, they discovered that it wasn’t a suicide as expected

It had ‘KKK’ scrawled on, KHQ reported.

‘Both the tactics and props used were a deliberate attempt to exasperate an anti-police sentiment and drive a divide in our community,’ the sheriff said.

‘This incident was carried out by people wanting to undermine our dedicated efforts to keep our city safe.

‘Too many good citizens are working with us to keep our community safe through active partnerships, and frank conversations about the challenges we all face.’

Williams added that this type of act will not be tolerated by his agency or the community, and said they will work together to hold those responsible accountable.

A sergeant told KHQ that they were relieved it wasn’t a real body.

Amid pressure for police to be held accountable for cases of brutality and calls for departments to be defunded, Sgt Bruce Baker emphasized the importance of keeping their officers safe.

‘Our goal at this point is to identify persons of interest for, most importantly, the safety of the members of the community and for our officers’ safety as well,’ Sgt. Bruce Baker told KHQ.

‘We are thankful this was not a real person. Anyone who has any information on who may be responsible for this is encouraged to call our partners at crimestoppers.’

Anyone with information regarding this incident is asked to call the Jacksonville Sheriff’s Office at 904-630-0500 or email JSOCrimeTips@jaxsheriff.org.