A Florida restaurant has ended its ‘Monkey Monday’ tradition after an eight-year-old boy was bitten by a customer’s pet capuchin.

Carrabba’s Italian Grill in Stuart, Florida, began the tradition in honor of customers Mary and Richard Van Houten, who came to eat there every Monday accompanied by nine-month-old capuchin JoJo.

But all that ended on July 16 when JoJo bit youngster Jaxson Ignelzi when the boy tried to pet her.

Carrabba’s Italian Grill in Stuart, Florida, has banned a couple from bringing their pet capuchin JoJo to the restaurant for their regular Monday meal after it bit a child

Jaxson was at the eatery for dinner alongside father Joseph, who approached Mary and Richard before dinner and asked if his son could pet the monkey.

The pair agreed, but told Jaxson to be careful because JoJo was acting ‘hyper’.

At first the petting passed without incident, with Joseph and Jaxson returning to their meal, but then the child went back a second time as he was leaving.

Jaxson ‘grabbed JoJo trying to play’, the Miami Herald reports, when the monkey turned around and bit him on the finger.

The boy escaped with a small cut and was taken to the hospital where doctors cleaned his finger and sent him home. 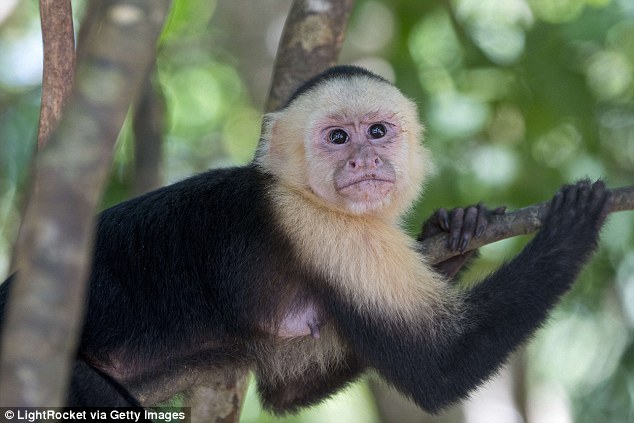 Eight-year-old Jaxson Ignelzi tried to ‘grab’ the monkey to play when she bit him on the pinky finger, leaving him with a small cut (file image)

Investigators were sent to the Van Houtens’ home where they discovered three other monkeys living, though all were properly cared for.

JoJo was up to date will all her vaccinations except rabies, which the Van Houtens said they were advised against getting by their vet. In fact it is mandatory.

The pair were cited for failing to get the vaccination, and for owning an exotic pet that bit somebody.

Carrabba’s Italian Grill says it no longer allows exotic pets in the restaurant, only service animals such as dogs and ponies.