A 13-year-old girl has become a local ‘hero’ after she hand-made superhero capes for babies spending Halloween in a neonatal intensive care unit.

This is the second time the middle schooler has made the costumes for the infants at Winnie Palmer Hospital for Women & Children, but it’s the first time she’s been able to hand them out herself.

Moms at the hospital say they are incredibly moved by the gesture and say that it’s made the difficult births a bit easier for them. 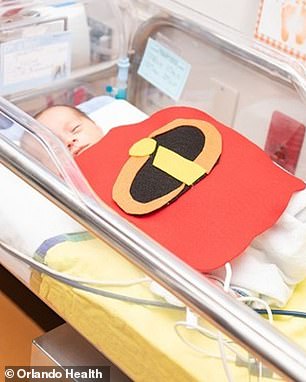 Rachel Maretsky, of Orlando, Florida, made 125 capes for babies in the neonatal intensive care unit at Winnie Palmer Hospital (left and right). This is the second time the 13-year-old has made the costumes 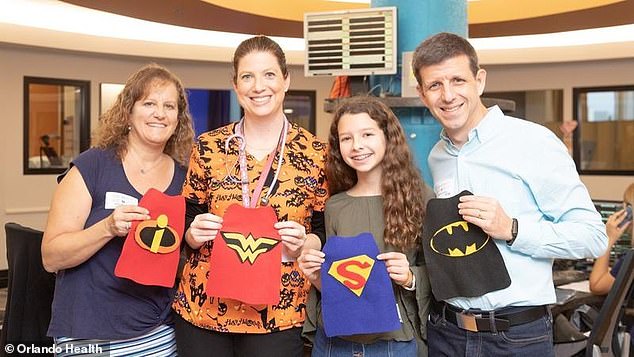 Rachel, her parents, and some of her friends hand-made the capes featuring emblems from Batman, Wonder Woman, Superman and The Incredibles

Rachel said she was inspired by a segment she watched on NBC’s TODAY show in 2016 about nurses at St Luke’s Hospital of Kansas City who made capes for the babies.

‘We emailed the nurses of the hospital and they sent us some of the patterns they used,’ she told Daily Mail Online.

The patterns the nurses sent over were of Superman, Supergirl, Wonder Woman, Batman and Batgirl.

This year, Rachel added an Incredibles cape to the mix, with a pattern she cut out herself.

Rachel’s parents and some of her friends offered to help make the tiny capes, which were created by pasting felt with hot glue in a clean space to avoid germs.

Premature babies, who have weaker immune systems than full-term babies, are at a greater risk when it comes to infections.

During the last stages of pregnancy, antibodies from the mother’s body travel through the placenta and umbilical cord to the baby.

But a premature baby may be born before this stage and, therefore, is born without any protective antibodies.

For the first round of capes, Rachel’s crew made 110 that were passed out over the weekend. 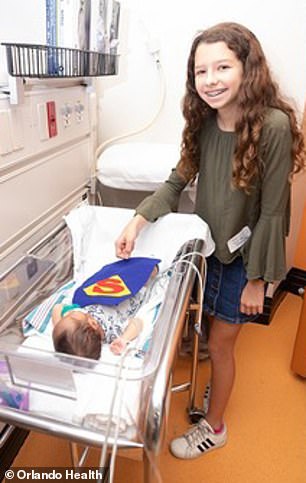 Last year, the staff handed out the capes but, this year, Rachel got to pass them out. One baby that she dressed herself was ‘feisty’ like he was ‘flying’ so she gave him a Superman cape (pictured)

When the middle schooler found out that more babies had arrived at the NICU, she and her mother Abby made 15 more on Tuesday and passed them out on Halloween.

Alayna Curry, a media relations manager for Orlando Health, told Daily Mail Online that last year Rachel got the costumes to the hospital a bit late so staff members passed them out.

‘This year, we wanted to make it special for her, so we had her pass out some of them and she got to meet some of the families,’ Curry said.

Stephanie Casaceli, a Volunteer Coordinator for Orlando Health added: ‘A lot of [the parents’] were not expecting their babies to be here for Halloween so may have not had time to get a Halloween costume.

‘It brings normalcy to the situation and makes things a bit easier for the parents.’

‘And the moms love it and say they’ve been incredibly moved by the gesture.’

In fact, Rachel got to put one of the capes on a baby.

‘It was really special,’ she said. ‘But he was active and feisty like he was already “flying” so we put a Superman cape on him.

‘But it was such a great experience and it really made me happy to make them really happy.’

Rachel said the project has special meaning to her because her best friend was born prematurely.

Her mother, Abby, told Daily Mail Online that it made her very proud to see her daughter take on such a large project.

‘It was a pretty amazing experience and it makes you so happy to see your child wanted to make others happy,’ she said.

‘Halloween is one of our favorite holidays. Rachel loves decorating the house and going trick-or-treating and she knows [the families] won’t be able to do that so she wanted to do something special for them.’ 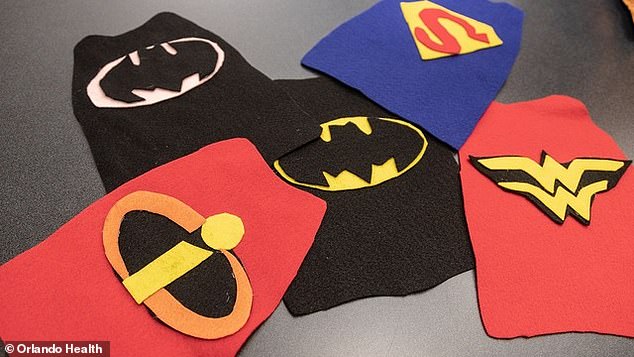 Rachel said the project has special meaning to her because her best friend was born prematurely. Pictured: Batman, Batgirl, Superman, Wonder Woman and The Incredibles capes

Rachel said that she’s already gearing up to do the project again next year, because she considers the babies to be ‘superheroes’.

‘I think they’re superheroes because some of them are born earlier than expected and even though they’re attached to all these tubes, they’re just coming out and able to survive and thrive,’ she said.

Despite all the capes, Rachel said she’s not planning on dressing up as a superhero this year. For Halloween, she’s going to be dressed as Winnie the Pooh and her friend is dressing up as Tigger.