Florida woman, 26, arrested after caught on video kicking dog and ‘hanging’ it by its leash

A Florida woman was arrested after she was caught in video abusing her leashed dog while they walked through a parking lot.

Michelle Sieber, 26, of Tarpon Springs, Florida, was arrested Friday and charged with animal cruelty after passerby Vincent Minutello recorded her kicking her dog and yanking up so hard on its leash that the poor animal was left struggling to stand on its hind legs.

The video was recorded in a parking lot in Tarpon Springs on Friday at about 10.45am. Minutello had just dropped off his girlfriend, who worked nearby, when he saw Sieber mistreating the dog, according to Fox 35. 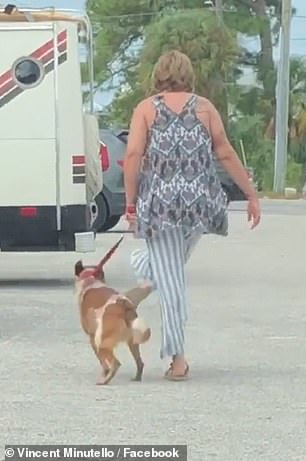 A passerby caught on video the moment when Michelle Sieber, 26, was seen kicking and ‘choking’ her pet Australian Cattle Dog while walking through a parking lot 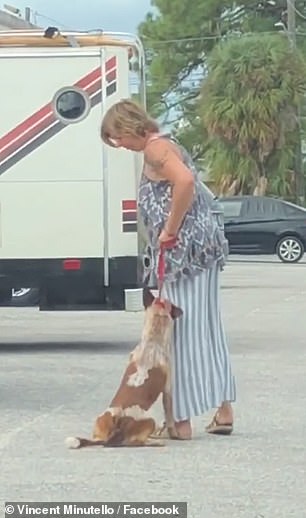 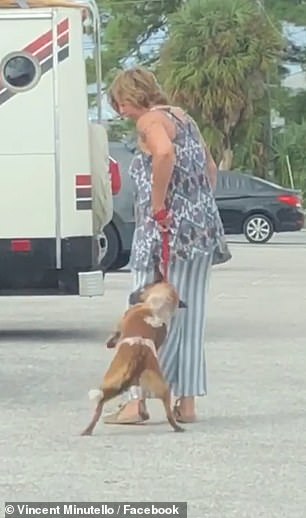 The dog sat down and refused to move forward, at which point Sieber yanked its leash

In the video, which Minutello shot from the driver’s seat of his car, Sieber and the dog can be seen seen walking through a parking lot towards a camper van. The dog seems to be well-behaved and even wagging its tail.

After a few steps, Sieber kicks the dog for an unclear reason. She then yanks the dog’s leash and shortens it by wrapping it around her wrist, at which point the dog adopts a seated position.

She then starts walking towards the camper van, but the dog starts to resist by refusing to walk forward. Eventually she’s able to get the dog to start moving again and all seems to be okay, until the dog tries to jump onto the camper’s bumper.

That’s when Sieber can be seen yanking up on the dog’s leash so hard that the dog is lifted off it’s front paws and appears to be choking. 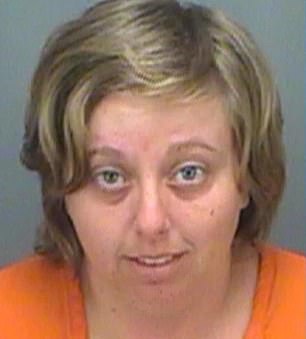 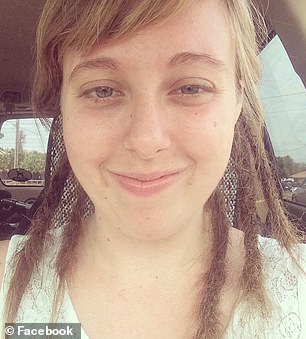 The passerby reported the incident to police, who were able to identify Sieber (pictured) and track her down. She allegedly told police that she was training the dog 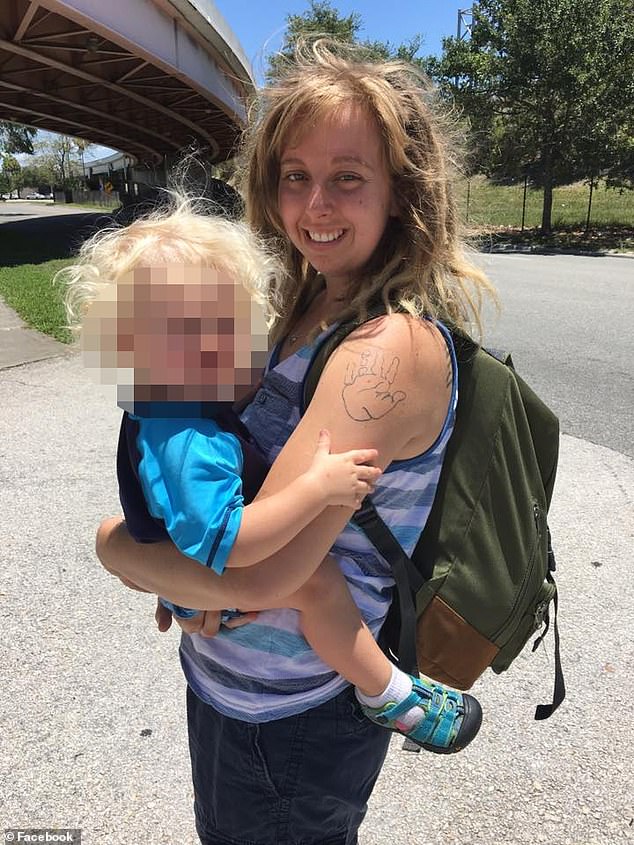 Sieber faces one county of animal cruelty to a domesticated dog and is being held on a $5,000 bond. The two dogs she lived with are now in the custody of animal control 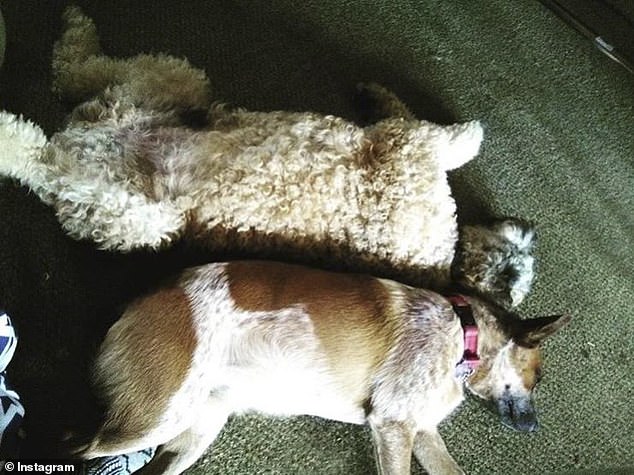 Sieber had posted pictures of her dogs on social media, identifying the dog seen in the video (in red collar) as an Australian Cattle Dog 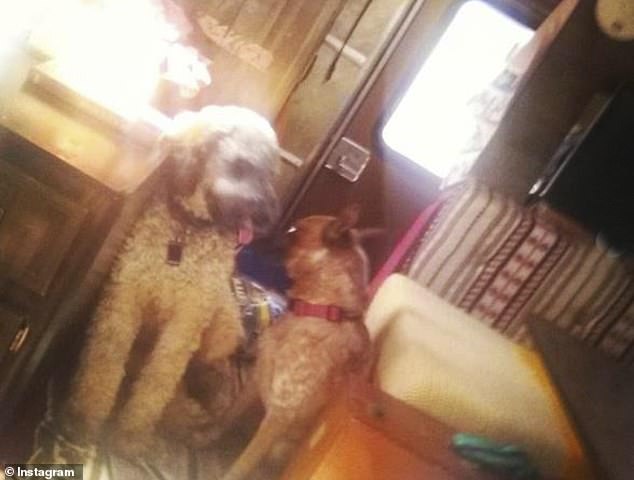 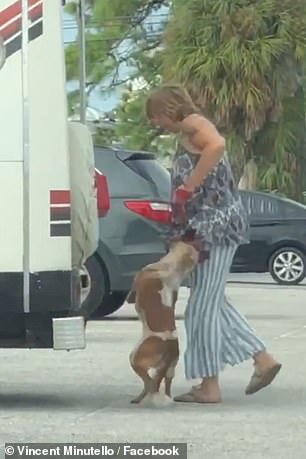 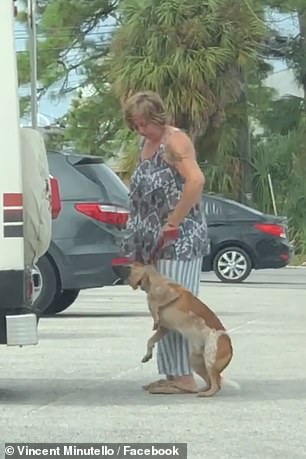 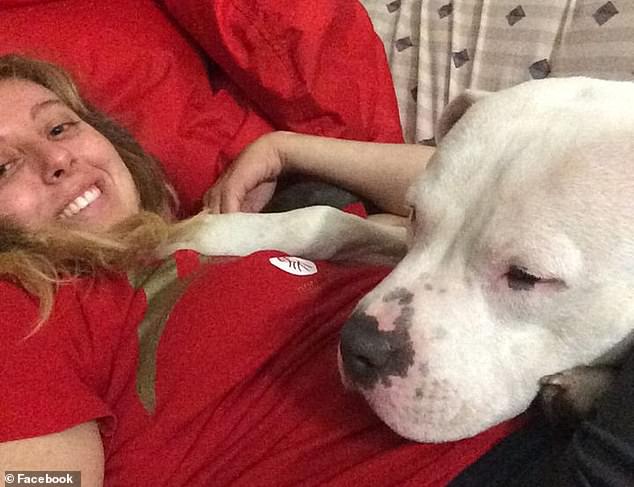 Minutello, still recording, then drives up behind the camper van to speak with Sieber.

‘Hey, can you be a little easy on that dog please?’ Minutello can be heard saying to Sieber.

‘You want him?’ Sieber replies.

‘No, but you can’t do what you’re doing,’ Minutello says.

‘Pull on his collar?’ she asks.

Sieber then says that if the dog stays put, she won’t pull on its collar, which is what collars are for. Minutello tells her to put the dog up for adoption and she says has already done so.

Minutello posted the video on Facebook that morning and asked friends in the neighborhood to tell him or call police if they saw Sieber’s van, as well as wondering who to call to report animal abuse. He then updated the post, which had gone viral, noting that he filed a police report about the incident.

Police were able to identify Sieber and arrested her in nearby Clearwater, Florida, that afternoon. She was booked into Pinellas County Jail at about 9.30pm on one count of cruelty to animals on a domesticated dog.

Her arrest affidavit, obtained by IONTB.com stated that she told police ‘that she was training the dog and that is why the choke collar was on for.’

Police also said that Minutello’s girlfriend had seen Sieber treat the dog in the video in a similar fashion the night before the video was taken.

According to the girlfriend, Sieber allegedly ‘threw’ the dog ‘sideways’ until it hit her camper van, where she is said to live with two dogs.

Police said the dog in the video is okay and that it, as well as Sieber’s other dog, are being taken care of by animal control.

In recent months, Sieber has posted a number of pictures of the dog from the video on social media, identifying it as an Australian Cattle Dog. She has also posted pictures of her pet labradoodle, Anatolian Shepherd, Great Dane and Chihuahua, as well as pictures of a cat and pot-bellied pig.

Jail records show that Sieber is being held on a $5,000 bond is awaiting trial.