Florida woman, 43, ‘crashes children’s birthday party and rapes boy, 17, who whispers for help to a girl, 12, sleeping nearby after being pinned down by his 250-pound attacker’

Jessica Good, 43, is accused of having sex with 17-year-old boy in front of a 12-year-old girl after drunkenly crashing a children’s birthday party on May 9

A 43-year-old Florida woman has been arrested on suspicion of raping a 17-year-old old boy in front of a 12-year-old girl after drunkenly crashing a children’s birthday party.

Jessica Good, from Punta Gorda, was booked into the Charlotte County Jail on May 12 on two counts each of unlawful sexual activity with certain minors and willful abuse of a child without causing great bodily harm.

Good was taken into custody after the alleged victim told a staffer at his high school that he was raped over the weekend.

According to an affidavit of probable cause obtained by DailyMail.com, on May 9, a boy was celebrating his 16th birthday at a home in Port Charlotte when Good arrived at the children’s party after a night of drinking with a friend.

Good continued to ‘hang out’ with the youngsters and was heard making extremely inappropriate comments, including allegedly calling a 12-year-old girl a ‘wh***’ and urging her to have sex with an older boy because ‘he has the biggest d***.’

During an interview with the authorities, the teen said he was sleeping on a loveseat after the party when Good came over, pulled down his pants and underwear, then exposed her privates, grabbed his penis and began raping him. 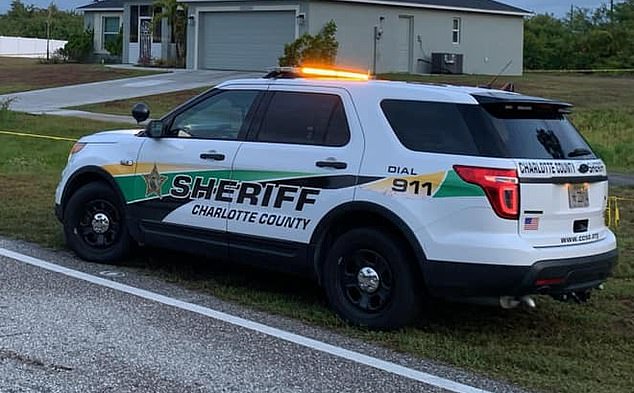 The 17-year-old claimed her ‘could not push her off of him because she was too heavy.’ According to jail records, Good weighs 250lbs.

The boy told investigators Good continued having sex with him until she either urinated, or released bodily fluids all over him. She then left.

In Florida, the age of consent is 18 years old, and sexual intercourse with someone who is under 18 is considered statutory rape.

The 12-year-old girl who witnessed the sex act offered a different version of events, saying she was asleep in a bean bag chair in the living room when she was awoken by moaning noises coming from Good and the 17-year-old boy, who she said were actively having sex in a loveseat just a foot away from her.

‘[The girl] stated the sex was mutual and they were both actively engaged in it,’ according to the affidavit. ‘Neither of them was telling the other to stop, and both were moving.’

The 12-year-old told detectives that at one point the teen boy whispered ‘help’ to her, and she instructed him to slide away.

The girl argued that the 17-year-old ‘could have easily pushed [Good] off very easily if he wanted to.’

According to the juvenile witness, the teen later got off the loveseat and went to the bathroom to vomit. He then returned, ‘slipped in behind the suspect’ and proceeded to digitally penetrate her.

When questioned about the incident by detectives, Good claimed she had been out drinking with a friend, and that she later blacked out and did not remember anything that happened that night.

She said that when she woke up on the loveseat, she found the 17-year-old digitally penetrating her. Good denied raping the boy, whom she allegedly knew to be younger than 18.