A Florida woman reportedly huffed several bottles of compressed air until she puked on herself while sitting in her car outside a Walgreens.

Police in Nassau County found Tammy Irvin, 34, gripping the bottle in her hand with vomit covering her body Tuesday in the parking lot of the Callahan drug store.

The officer who arrested Irvin said there were three other bottles lying inside the truck, according to Fox 30 Jacksonville.

When the deputy went in the Walgreens to question employees, they informed him that Irvin had been hanging around at the store all day.

Florida woman Tammy Irvin, 34, was found covered in vomit in her car after huffing canned air for at least six hours

She reportedly first entered the pharmacy around 10:20am when she purchased the first bottle of canned air.

She returned again shortly after noon, again around 1:40pm and once more just before 4am, employees said.

The deputy noticed she had been sitting idle in her Ford F-150 when he approached the truck and found the ill woman inside with the heat cranked all the way up.

Irvin informed police she was going to hang out in her truck ‘and not go anywhere,’ the news station reports. 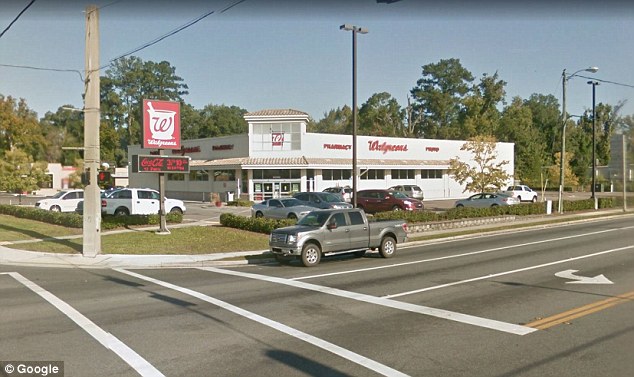 Irvin was found slouched over in her truck at the Callahan, Florida Walgreens after huffing the canned air

The middle-aged woman has been arrested on charges for dangerous chemical inhalation.

Canned air bottles are commonly used for a variety of cleaning purposes, such as dusting electronic devices.

Recreational use of the aerosolized cleaning bottles have otherwise been referred to as ‘dusting’.

The ‘products are made of a gas that is compressed into a liquid and canned’ and are can present a variety of dangers that may be fatal, according to Safety and Health Magazine.