Floyd Mayweather earned himself a handy New Year’s bonus on Monday as he returned to the ring with a first-round stoppage of Tenshin Nasukawa in a farcical exhibition fight in Japan.

Mayweather, who spent much of the fight smiling, floored his opponent three times inside the first few minutes before Nasukawa’s corner threw in the towel.

The kickboxer – banned from kicking in this bout – was left in tears as Mayweather danced a merry jig, having stalked his opponent and sent him flying across the canvas like a rag-doll. 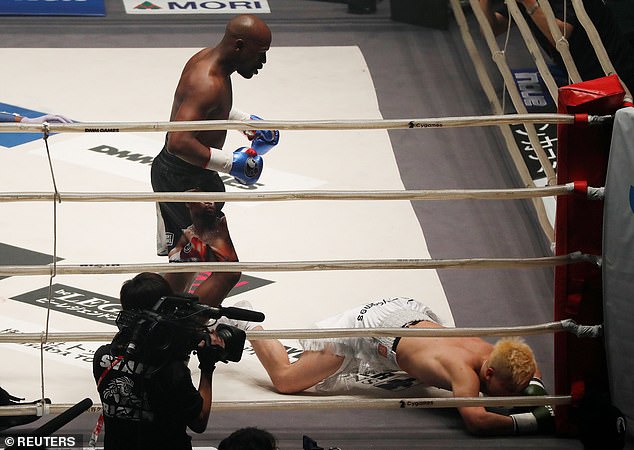 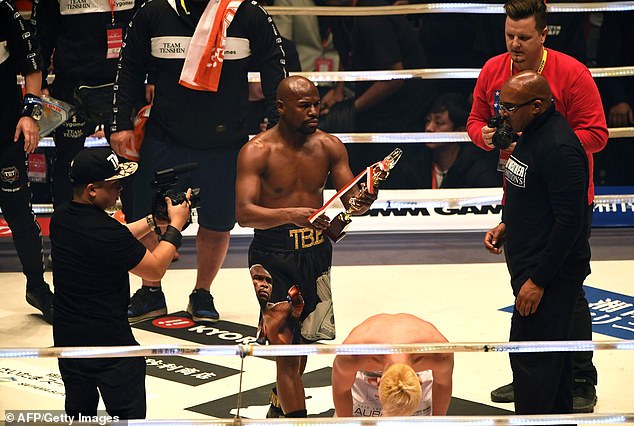 ‘We had fun, first I want to thank God for this unbelievable turnout, this event, my team. Tokyo, Japan you guys are amazing I want to say thank you,’ Mayweather said after the fight.

The 41-year-old was not in prime shape but he still proved far too strong for Nasukawa, 21 years his junior, in the nine-minute scrap at the Saitama Super Arena just outside Tokyo.

He wore a big smile for much of the first minute as the two fighters felt each other out amid a raucous atmosphere inside the 37,000-seater arena.

But there was little friendliness in his work thereafter as, left and right hooks sent the younger, smaller and lighter man down and across the canvas. 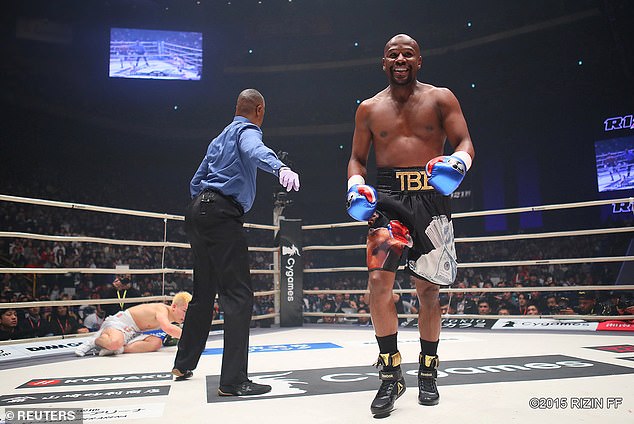 Mayweather enjoyed himself outside Tokyo, smiling for much of the first few minutes 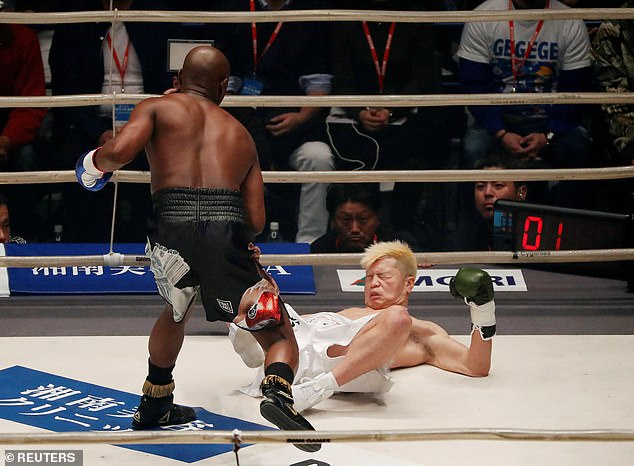 Nasukawa is sent packing by Mayweather, who dominated his younger and lighter opponent 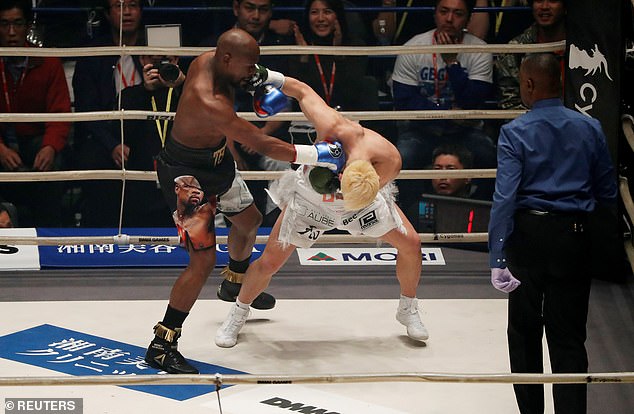 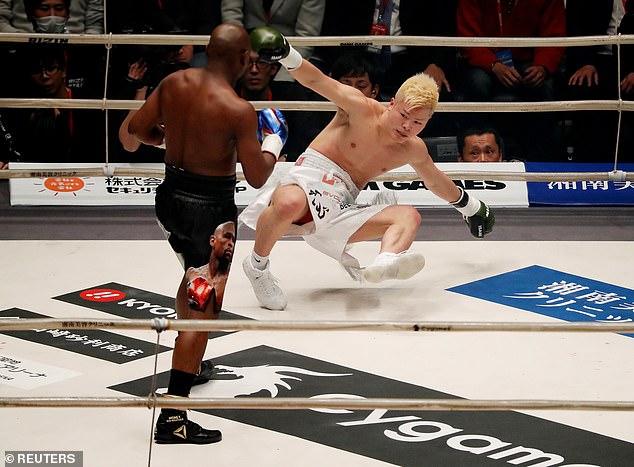 The former five-weight world champion, who won all 50 of his professional bouts, retired from boxing in the wake of his victory over Conor McGregor in August 2017.

That win took his career earnings beyond $1billion and on Monday he took on another MMA fighter for yet another handsome payday.

Nasukawa, 20, is a kickboxer by trade but against Mayweather on the outskirts of Tokyo he was banned from using his feet over the three rounds of exhibition action.

And when it came down to a battle of fists, there was little by way of a contest. First a left hand sent Nasukawa to the floor before a right hand to the body was followed by one to the head and the Japanese fighter was left in a heap in the corner.

When the action resumed, a left hook sent him flying across the ring once more before the towel came in.

The Japanese fighter had previously won all 32 of his combat sports contests, and Mayweather stressed: ‘We are both still undefeated, I did this to entertain the fans in Japan, they wanted this to happen and I said why not, Tenshin is still a great champion, I am still retired. 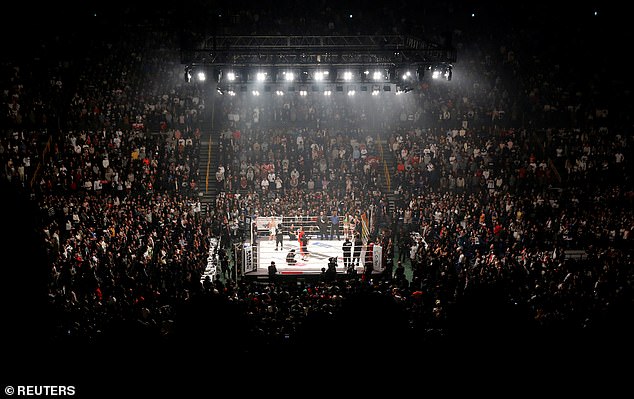 The two fighters clashed inside the amazing 37,000-seater Saitama Super Arena in Japan 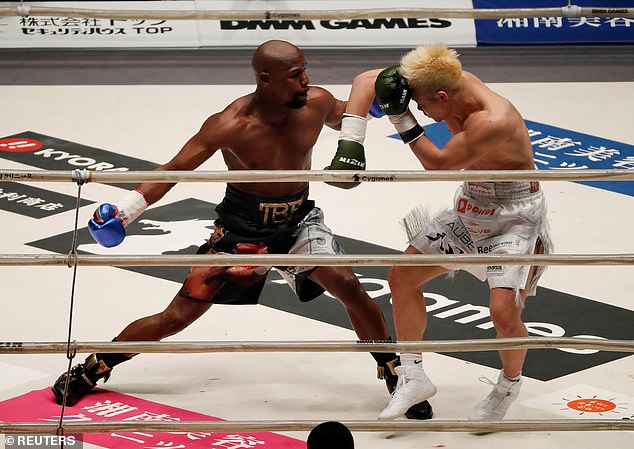 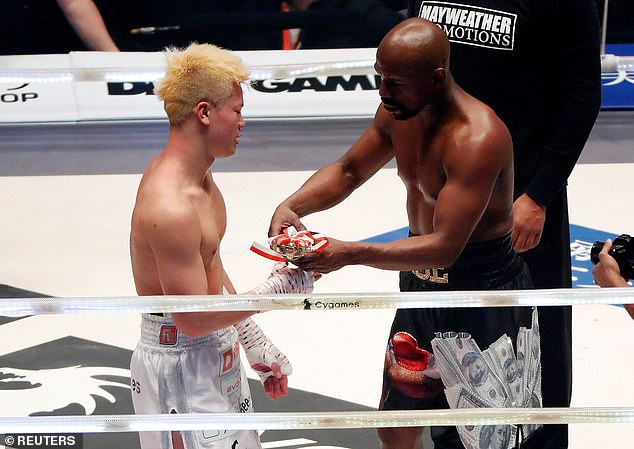 Mayweather hands the trophy to his beaten opponent, who was left in tears after the fight

‘Tenshin hold your head up high, I want the fans to support him, he’s a great guy, a great fighter and great champion.’

The conclusive finish came after hours of uncertainty. Earlier on New Year’s Eve there were fears that the American may not show up for the fight, with reports suggesting he had gone AWOL.

But even when he did show up it was a far cry from the heights of Mayweather’s proper ring career, when he lit up the Las Vegas strip for nine-figure fees.

But boxing’s greatest self-promoter still managed to negotiate himself a good deal.

‘What if I told you I was making $9,000,000 for 9 minutes of sparring in Tokyo Japan would you do the same if you were me? I like to call it a 9 minute walk thru,’ he wrote on Instagram ahead of the fight.

As it turned out, it was even easier work than that. 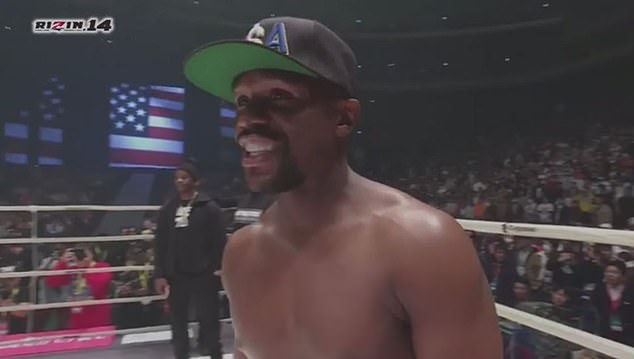 As ever, Mayweather looked relaxed ahead of the three-round exhibition on New Year’s Eve 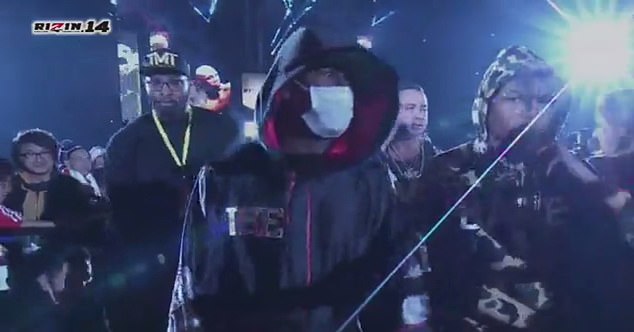 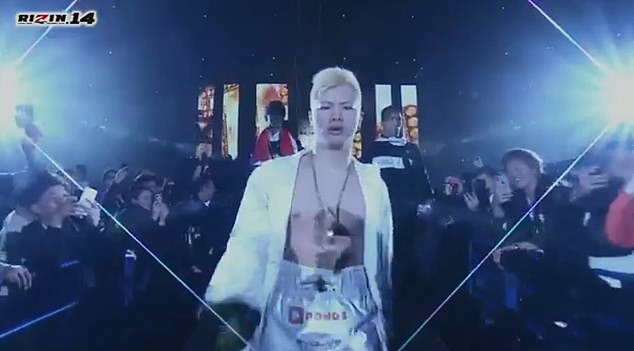