Floyd Mayweather v Conor McGregor lived up to the hype

Thousands of empty seats, many Irish supporters priced out from the arena and embarrassing problems with the Stateside pay-per-view system.

After months of ceaseless hype for the coming together of these two motormouths, there was plenty of ammunition ready and waiting to rubbish this circus, particularly if the contest had been over in a matter of seconds.

But happily, it wasn’t. This was as absorbing and competitive as any could have imagined and unquestionably lived up to the hype. 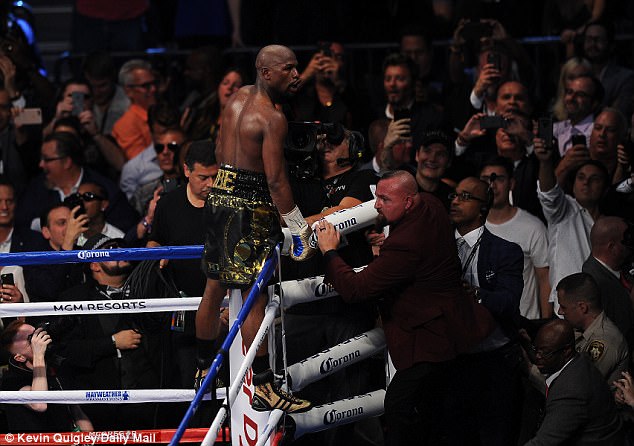 Mayweather stands on the ropes after beating McGregor on Saturday night 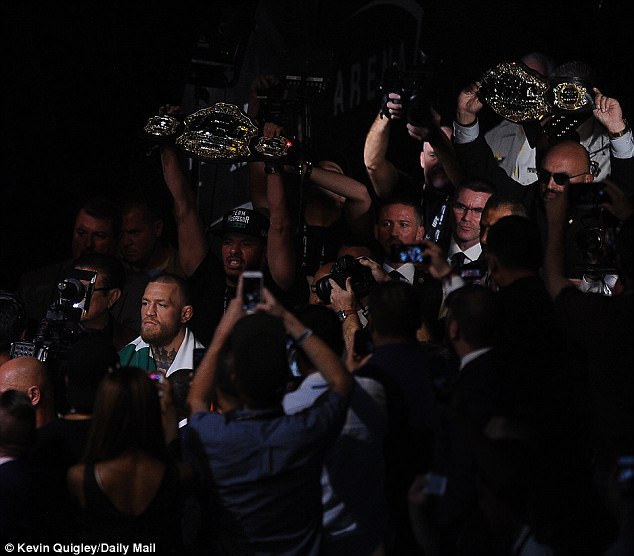 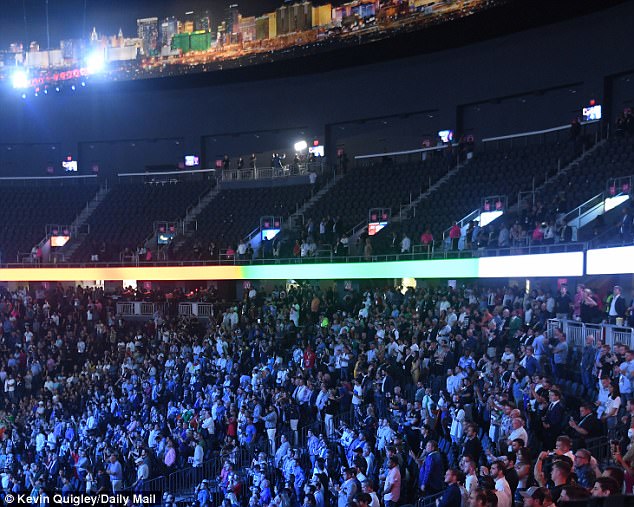 Yet McGregor’s adept and gutsy performance put the encounter in a completely different light. Suddenly it wasn’t the farce or mismatch which many boxing purists had lambasted.

The outcome was never going to have any tangible bearing on the long-term future of boxing. This wasn’t another Mayweather and Manny Pacquiao to decide the best of the best on a level-playing field. It was two worlds colliding in a showbiz, fantasy bout. 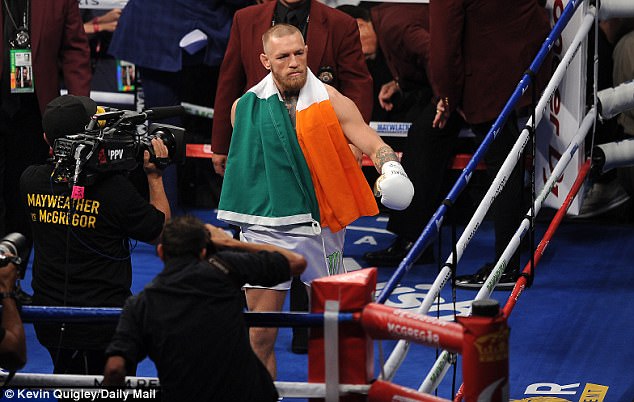 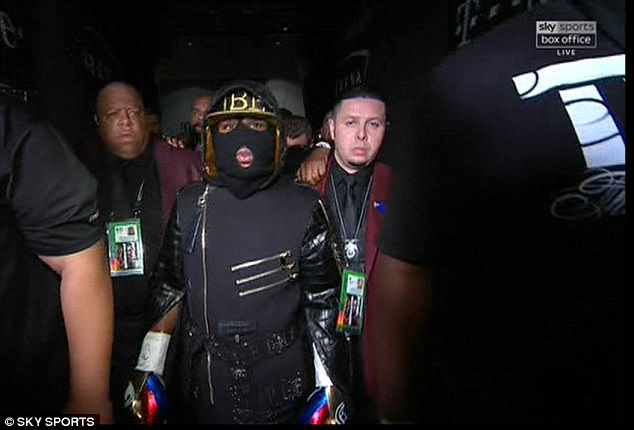 The real question was always whether viewers from more than 200 countries were entertained? On the level of both a spectacle and as a sporting contest, the answer was a resounding yes.

As a spectacle, it was everything it promised to be – McGregor even getting his hands wrapped while sporting his shirt, tie and waistcoat.

He gazed icily down the camera lens, with an Irish flag draped around his shoulders, as he wandered down the aisle. Mayweather, meanwhile, walked to the ring as some sort of masked samurai, before laughing to himself during the introductions.

As they backed off towards their corners for the opening bell, there was a huge roar inside the T-Mobile Arena. 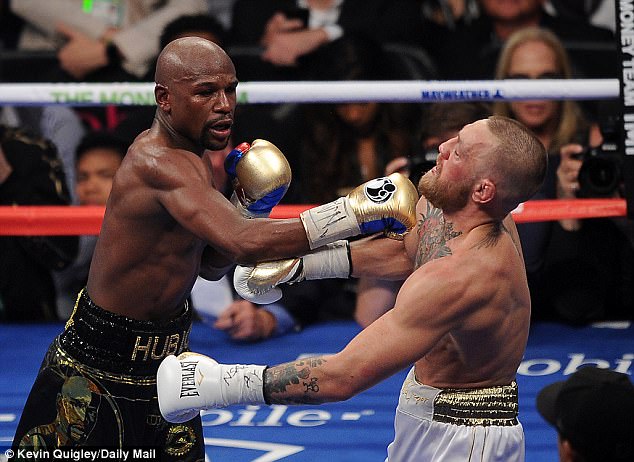 Mayweather, when he connected with McGregor, caused problems for the Irishman

It was a spine-tingling moment. But then the contest lived up to the billing too.

McGregor attempted to make the running by throwing plenty of punches and he connected with a lovely left hand uppercut during the closing stages of the first round. It was a just rewards for his greater ambition, with Mayweather sitting behind his defence and very selectively picking his punches.

The Irishman remained the more aggressive and brighter of the two. Far from being daunted by the standard of his opposition, McGregor looked comfortable and relaxed.

There were no antics either. He was determined to demonstrate his boxing credentials and did so by taking the first three rounds. 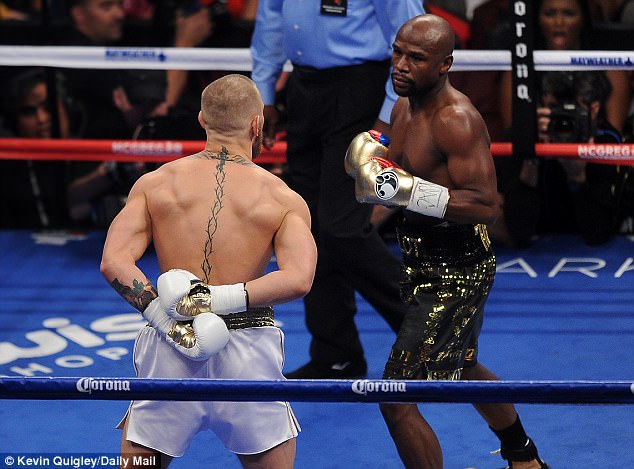 It wasn’t until a short left from McGregor connected in the fourth that Mayweather was triggered into stepping up his offence – connecting right on the jaw on a couple of occasions.

There were some big body shots from Mayweather in the fifth as McGregor clearly began to tire. The American was able to alternate his punches to the head and began to put his stamp on proceedings.

The crowd sensed that the end was on the horizon both during the sixth and the seventh, as the exhausted McGregor was persistently picked off with clean shots to the head. 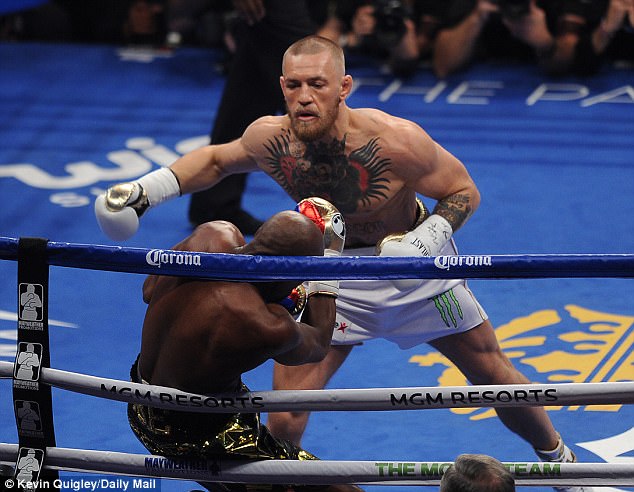 But McGregor continued on; doggedly staying on his feet and refused to be phased by the straight rights which were zeroing in.

Finally, the clean shots became too much to take for McGregor as a thumping right sent him spiraling against the ropes, before Mayweather went in for the kill.

But morally, this was a huge win for McGregor. After zero professional fights, he took one of the greatest to ever lace the gloves to the 10th round. 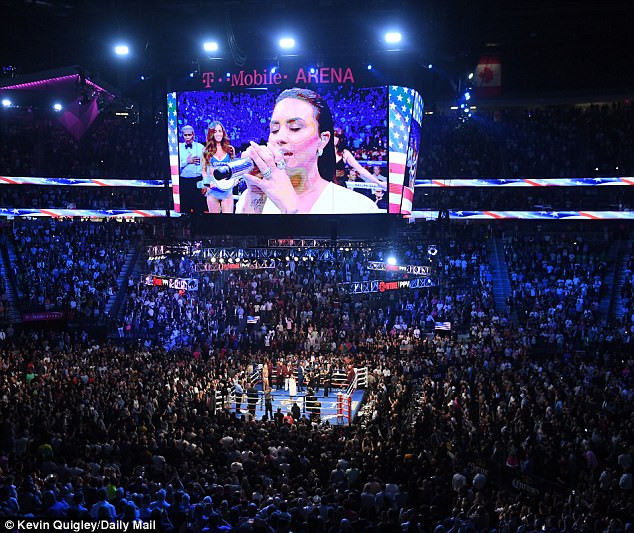 After swelling their bank accounts so substantially from a solitary night in the Nevada desert, the pair had achieved their goal before the opening bell rang. All of those critiques of this ‘circus’ ultimately mattered little when Mayweather was able to take his career earnings beyond the $1billion mark and McGregor enjoyed by far his biggest ever pay day.

But in achieving victory, Mayweather surpasses the great Rocky Marciano in finishing his career on 50-0.

As he congratulated McGregor’s efforts in the ring afterwards, Mayweather can reflect on how the final fight of his career may ultimately prove to be one of his most memorable.