Only four in 10 frontline NHS staff has rolled up their sleeves for the flu vaccine, the lowest uptake in a decade, MailOnline can reveal.

Despite begging vulnerable Britons to get the jab amid predictions of a dire winter the NHS itself has failed to convince most of its staff to do the same.

Frontline medics like doctors and nurses are offered the flu jab for free every year to help stop them inadvertently spreading the virus to any vulnerable people they encounter at work, like the elderly or cancer patients.

It comes as hospitals face what has been dubbed a ‘flu-nami’ with the infectious virus hospitalising nearly 60 times more people this year than last winter.

A MailOnline analysis shows only about four in 10 frontline NHS staff have got the flu jab as the health service is battered by rising influenza admissions. The result is lowest uptake the health service has seen by the end of November since 2012 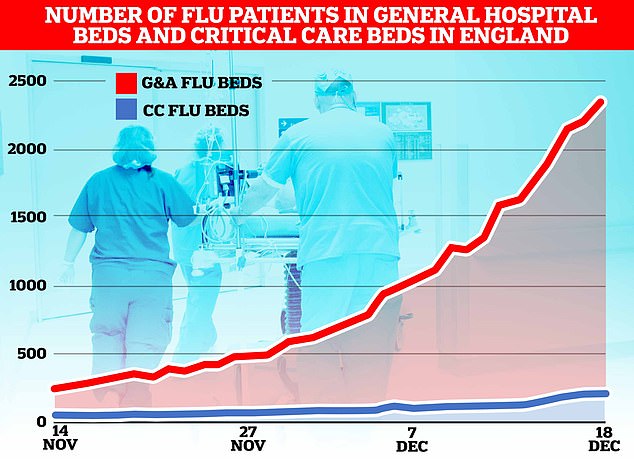 NHS England data show an average of 1,939 people with flu were in hospital each day last week. It was up 67 per cent on the 1,162 recorded the previous week and 57 times higher than the 34 recorded at the same point in 2021

Why do frontline NHS staff get a free flu vaccine?

Health bosses offer frontline NHS staff a free flu vaccine every year to protect both the public and the NHS.

The vaccines help reduce the chances of NHS staff becoming ill and needing to take time off work.

This helps the NHS maintain the staffing levels needed to look after patients.

If too many staff are off sick the health service might need to cancel some elective services to divert staff to emergency care or use expensive agency staff to help plug the gap.

The second reason is to help protect patients, particularly those for whom a flu infection could be very dangerous.

As people can be infectious, i.e. able to spread the virus, before they start showing signs of illness un-jabbed NHS staff could catch the virus from a patient or the public and then unintentionally spread the flu to others.

Whilst most people with the flu make a full recovery at home, elderly Britons or those with certain health conditions that weaken their immune system can need to go to hospital increasing further demands on the NHS.

As vulnerable Britons are more likely to encounter NHS staff as part of needing care staff are offered the flu vaccine to reduce the chances of transmitting the virus.

The lower than usual flu jab uptake among frontline NHS staff was revealed by a MailOnline analysis of a decade’s worth of Government data.

Collected by the UK Health Security Agency, it shows only 41.8 per cent of all frontline staff in the NHS in England got the free flu jab by November 30, the latest data available.

This is the lowest annual figure for vaccine uptake among staff since 2012, when only 40.8 per cent of staff got the jab.

It also represents a sharp decline from 2020, when seven out of 10 staff (71 per cent) opted to get vaccinated against the flu.

Broken down by staff group, only 41.8 per cent of NHS frontline doctors and 44.4 per cent of the health service’s frontline nurses got the flu jab.

It comes as the UK faces a surge of influenza cases that is piling extra pressure on a health service already besieged by rising winter demands, Strep A, and staff strikes.

The latest admissions data for England shows an average of 1,939 people with flu were in hospital each day in the week ending December 18.

Although still lower than Covid, the flu figure was also a sharp increase on the daily average of 480 at the end of November.

Professor Paul Hunter, a public health expert at the University of East Anglia, told MailOnline that flu vaccine uptake in frontline health workers was critical for not only for their health, but for the public’s, and the wider NHS.

He said: ‘One of the biggest problems during a bad flu year is health care staff going off sick with the flu and so staffing levels become unable to cope with demand on the NHS.

‘The more health care workers [that] catch flu, the more likely it is that vulnerable patients become infected and so add to the pressure on health services because of delayed discharges or need for respiratory beds.’

He added that the NHS had generally always struggled to encourage most frontline staff to opt in for the flu jab.

But Professor Hunter speculated another factor dragging down this year’s effort could be vaccine fatigue from the numerous Covid shots NHS staff had been encouraged, and in some cases threatened, to have.

‘I suspect some of the low uptake is down to vaccine fatigue,’ he said. 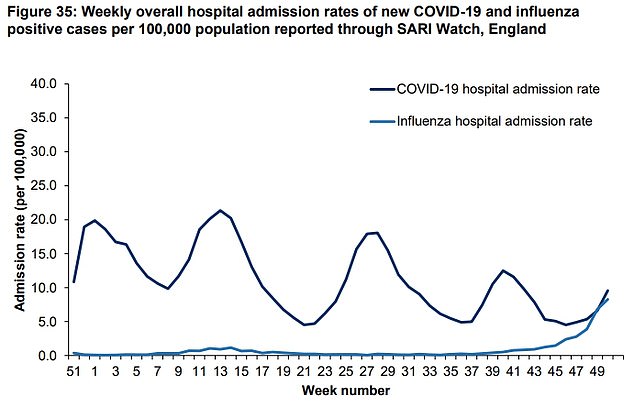 The graph shows the weekly hospitalisation rates for flu (light blue line) and Covid (dark blue line) per 100,000 people in England, based on positive tests 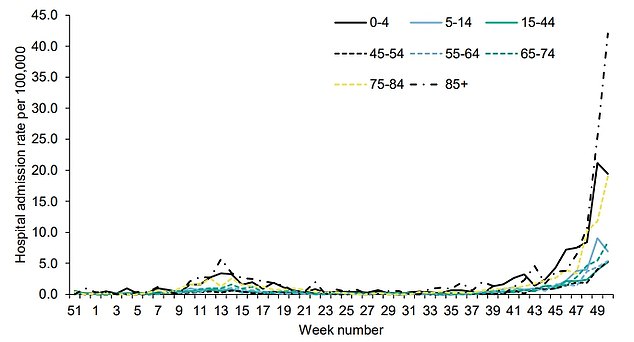 The graph shows the weekly hospital admission rate by age for influenza. Admissions are highest among the over-85s

What is the flu?

The flu is the name of a contagious respiratory illness caused by influenza viruses.

It mainly infects the nose, throat but can sometimes reach the lungs.

Most cases are mild but it can be deadly.

The flu is mostly spread through tiny droplets made when people with the virus cough, sneeze, or talk.

Flu vaccines are considered the best protection against the the viruses but can take up to two weeks to work.

People need a flu vaccine every year as the viruses that cause the illness can change.

Experts formulate the flu vaccines based on global data, in particular looking at the type of influenza viruses are spreading in the parts of the world going through winter.

It then takes about six months to produce sufficient quantities of vaccines.

Flu symptoms can include:

‘Maybe people feel that just having the Covid vaccine would be enough or maybe the messaging over Covid and flu vaccines are interfering with each other.’

Another potential issue was people forgetting how bad flu could be due to it being blunted over the previous two years, he said.

Professor Hunter said flu admissions data underplays the potential seriousness of the situation as they underestimate the real impact of the virus on health.

He said: ‘Most severe disease and deaths after flu are not directly caused by the influenza virus and may not even be diagnosed as being due to flu because by the time someone ends up in hospital a laboratory diagnosis becomes impossible.

Professor Hunter said this damage caused by the flu weakening the body is what is driving a the rise in Strep A infections that have killed more than two dozen British children so far.

An NHS England spokesperson said they are continuing efforts to try and convince staff to get the flu vaccine, and thanked those that had opted in.

‘Flu has a serious impact on the health of thousands of people every year, and the NHS needs as many of its staff as possible to be fighting fit over the coming months, so we continue to promote vaccination uptake across healthcare workers,’ they said.

One measure to boost uptake has been issuing reminders to frontline staff to get the jab such as printing messages on their pay slips.

The spokesperson added there was no shortage of flu jabs for NHS staff.

Under health service rules every NHS employer needs to offer 100 per cent of its frontline staff a free flu vaccine every year.

Making the flu vaccine mandatory for NHS staff as condition of their employment was once touted by former Health Secretary Matt Hancock.

However, his successors have not made any such commitment following an 11th-hour U-turn by Sajid Javid, who replaced Mr Hancock, over a similar scheme for mandatory Covid jabs for NHS staff.

The reversal followed warnings that making Covid jabs compulsory for NHS employment would lead to crippling staff shortages, with up to 80,000 employees facing the sack.

How deadly is flu?

The number of people who die of flu, also called influenza, varies from year to year.

Flu is divided into different strains, Influenza A is more deadly overall, particularly for the elderly and young children, whereas influenza B outbreaks generally result in fewer fatalities

How many people actually die of flu each year in the UK is complicated because of flu and pneumonia deaths are often recorded together.

It is estimated that in a bad season flu will kill 30,000 people in the UK.