Getting comfortable on a plane is no easy task, but one woman has provoked the disgust of fellow travellers after being spotted lying on the floor in front of her seat.

In a picture featured on the ‘Passenger Shaming’ Instagram account, which shares snaps from around the world, a woman can be seen lying on her side in the foot well, while a man takes up three seats for a nap.

The account is run by a former US flight attendant who wrote: ‘QUESTION: Would you ever lay on the floor of an airplane? (but in other news, dude seems awfully chivalrous!)

In the picture we see the person, who appears to be a woman, sprawled out underneath her row with her feet almost dangling onto the aisle on the ‘disgusting’ plane carpet

In the picture, the woman can be seen sprawled out underneath her row, with her feet almost dangling on to the aisle.

Commenters were surprised by the man for taking the more comfortable make-shift bed, but were utterly perplexed as to why someone would lie on the ‘dirty’ floor.

‘What’s more obvious for me here is the fact the guy is on the comfier seats and the girl is on the floor!’ said one person.

Another added: ‘Absolutely no. The floor is one of the dirtiest parts.’

The picture was shared on ‘Passenger Shaming’ Instagram page, an account that shares snaps from around the world ‘shaming’ flyers for their unusual behaviour while on board plane

A woman named Kathleen Wenger seemed wary of the foot wells, replying: ‘Just think her face is on the floor where people have been putting their feet and dirty diapers.’

Given that people shed dead skin cells on carpets, and the huge footfall, it may not be the wisest sleeping spot.

Yet some people didn’t seem too bothered by it. One person said: ‘When you are 20 hours into the 25-hour flight from Australia to the UK, the floor looks very comfortable!!!’

Another person added: ‘Those 14 plus hour flights have you doing things you’d never thought you’d do. I empathize. Granted I’d at least put down a blanket.’ 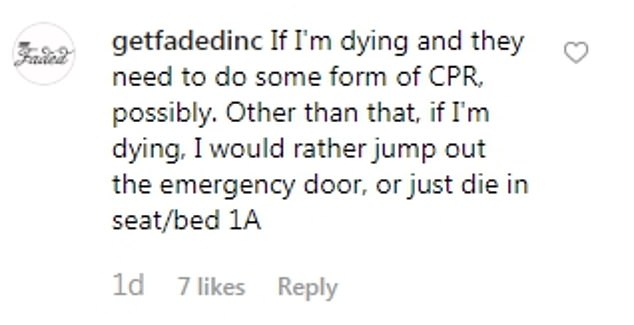