PLAYER TO WATCH: Nolan Patrick. The Flyers bet their future on the 20-year-old Patrick when they made the center the No. 2 pick of the 2017 draft. Patrick had been bothered by a variety of injuries and but didn’t need offseason surgery for the first time since 2015. Patrick’s ice time jumped late in the season and he could blossom into a star this season paired on a line with James van Riemsdyk, a 36-goal scorer who signed a $35 million, five-year contract. On a team that still counts on the veterans for the bulk of the scoring, Patrick’s emergence would show the Flyers were right to start a rebuild.

The puck falls from the glove of Philadelphia Flyers goalie Brian Elliott, left, onto the stick of Boston Bruins’ Peter Cehlarik who scored a moment later during the first period of an NHL preseason hockey game, Monday, Sept, 24, 2018, in Philadelphia. (AP Photo/Tom Mihalek)

OUTLOOK: The Flyers have won between 33 and 42 games each of the last five years, a streak of mediocrity that sometimes gets them in the playoffs and sometimes it doesn’t. The Flyers would like to not have to wait until the final week of the season to qualify for a playoff berth but it’s difficult to imagine they can approach 100 points this season. 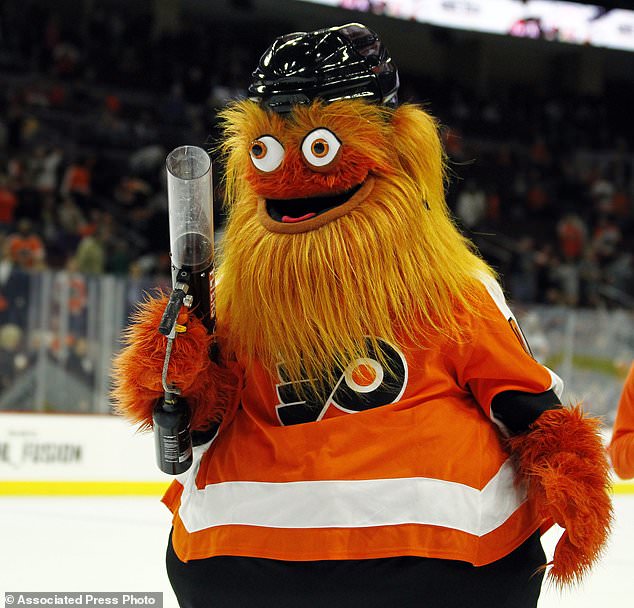 FILE – In this Sept. 24, 2018, file photo, the Philadelphia Flyers new mascot, Gritty, takes to the ice during the first intermission of the Flyers’ preseason NHL hockey game against the Boston Bruins,in Philadelphia. The character’s debut triggered an outpouring of comments online, including “Good luck sleeping tonight, Flyers fans” and comparisons to ZZ Top and the Muppets. (AP Photo/Tom Mihalek, File)