A flying ax narrowly missed a man’s head by inches after it rebounded from the target at a Missouri ax-throwing bar.

The 10-second-clip from the Springfield bar, showed the man clutch his head and duck just in time to miss the projectile flying back towards him on Saturday.

Before the incident, he could be seen slowly aligning himself with the target, holding the ax above his head with two hands and practicing the swinging motion.

After another thrower in a separate stall returned, he released the weapon, sending it flying into the bottom of the wall. 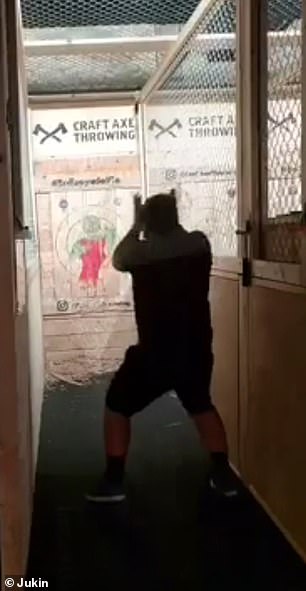 The unnamed male lines up to throw the ax (left) at a Craft Axe Throwing location believed to be in Springfield, Missouri. After releasing the projectile it suddenly hits the bottom of the wall and bounces back up towards him (right) 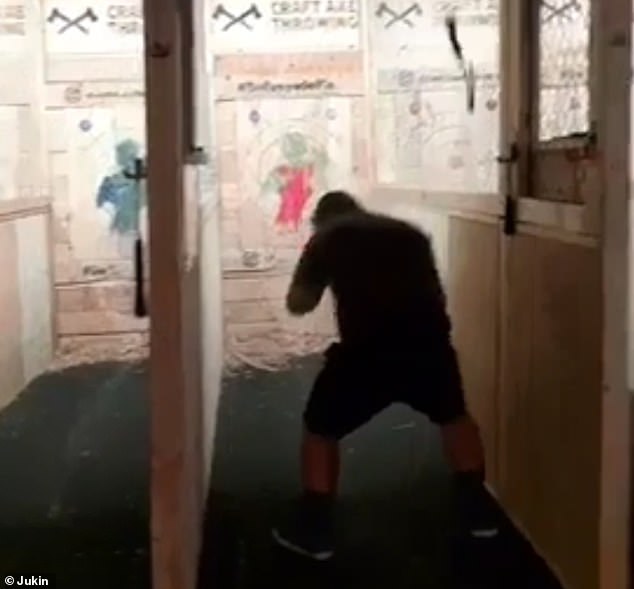 The ax (top right) can seen flying over the man’s head, who clasped his face and ducked down just in time to miss the projectile

Suddenly the spinning ax bounced back towards him. Fortunately, he was able to move out of the way before it hit him.

‘Whoa… sh*t’, the cameraman yelled, as the ax soared over the thrower’s head and bounced along the floor.

A clattering sound was heard as the weapon continued to bounce along the floor tiles towards the bar.

The man who threw the ax looked bewildered as he slowly walked back towards the cameraman.

The incident happened Craft Axe Throwing in Springfield, Missouri, one of five locations owned by the company, where four people can play on a single target.

Their site states that ‘AXEXPERTS’ run through safety and rules with participants before they begin and also coaches monitor the throwing areas. 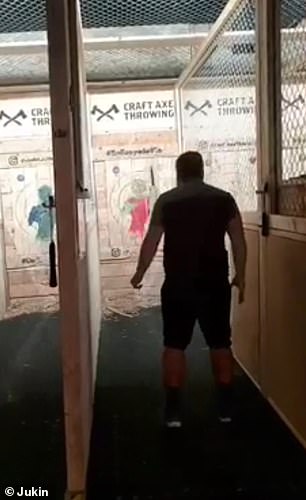 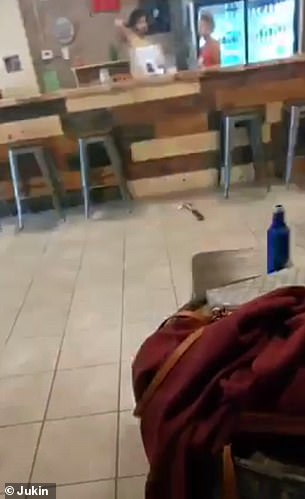 The projectile can be seen traveling through the air moments after being released by the thrower (right). The ax then continued to bounce over his head and onto tiling (right) that led up to a bar in the location

DailyMail.com reached out to Craft Axe Throwing who responded with the following statement: ‘It has come to our attention that a video taken at one of our facilities has started trending online.

‘The video shows a miscalculated ax throw resulting in an ax missing the target and bouncing backward out of the lane. Thankfully, no one was injured.

‘We have worked hard to maintain the best safety standards and will continually work to improve the safety of this sport we have grown to love.’

They added that the company will be taking ‘immediate action’ in accordance with World Axe Throwing League recommendations.