These shocking photos show the 130ft path of rubbish left by flytippers in a rural lane.

The carnage included mattresses, sofas and carpets and four skips were required to remove it from Woodhall road, on the outskirts of Bradford, West Yorkshire.

One local described it as the worst trail of rubbish he had ever seen though it was accumulated in just two weeks.

The trail of rubbish dumped by flytippers on Woodhall road, on the outskirts of Bradford, West Yorkshire

Mohammed Khan spotted the trail and described it as a ‘real eyesore’.

He said: ‘This is mindless tipping – I have had to try and move some of the rubbish so I can get past in my car.

‘This is the worst case of flytipping I have seen in this area. 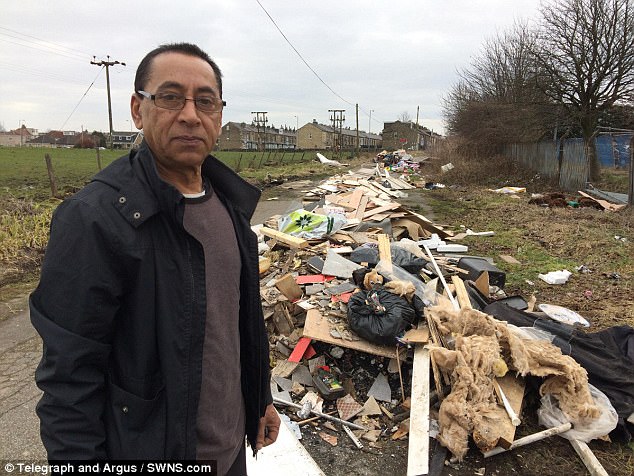 Local Mohammed Khan, pictured, said it was the worst case of flytipping he had ever seen in the area and it needed four skips to clear

‘There are several lorry loads and the rubbish is a mixture of all sorts of things. It is disgusting that people have done this to avoid taking it to a recycling centre.

‘It has made a real eyesore and health hazard and has spread and blown all around.’

Mr Khan obtained video footage of a white tipper truck dumping rubbish near the entrance to the road on Friday last week.

He said that he has passed the video footage to the Council so they can identify the culprits and a prosecution can be brought.