Get your round in! As the pros tee off tomorrow for the 150th Open at St Andrews, amateurs can pitch up to these sublime championship courses

By Adam Turner For The Daily Mail

Just as we think of Wimbledon as the greatest tennis tournament in the world, we regard The Open as the most respected golf major in the world — and tomorrow it celebrates its 150th anniversary at the home of golf, St Andrews in Scotland.

Like many venues on The Open’s rota, you don’t have to be a PGA pro to play there (though you will need a handicap certificate). So book your tee time, load up your clubs and look forward to stomping up hallowed fairways and following in the footsteps of Tiger Woods and Rory McIlroy at these sensational championship courses.

This week pro golfers will be lining up to celebrate the 150th anniversary of The Open at the home of golf, St Andrews in Scotland (above) 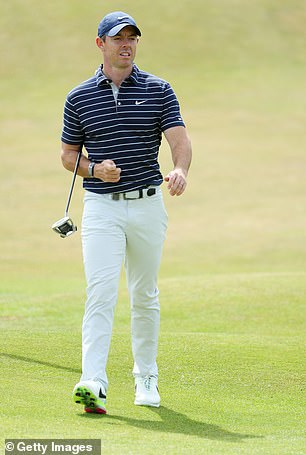 St Andrews sits on a natural, barren-looking cliffside overlooking the North Sea, close to the pretty Scottish town of the same name. The Old Lady, as it’s known, is a classic links course with wide and narrow fairways, thick gorse, dry stone walls and knee-high rough. The 17th, the Road Hole, is one of the most feared holes in golf — you shoot over Old Course Hotel to the fairway.

Privately-owned Muirfield golf course, on Scotland’s golf coast, is steeped in history — golfing records date back to 1744. Some say it’s not as pretty as Royal Portrush, but the approach to the 12th, looking over to the village of Gullane above a sunken green, may convince you otherwise.

How to do it: Rounds (Tuesday and Thursday only) from £125 (muirfield.org.uk); B&B at The Watchman Hotel from £115 a night (watchmanhotel.co.uk).

Formed in 1889, Stockport’s Royal Birkdale is possibly England’s most-loved links venue. Its most distinctive feature is its immense dunes threaded with well-cut fairways.

It’s also home to one of the most challenging opening holes on the Open circuit. Enveloped by monumental dunes covered in thick rough, the par-three 12th hole is the star of the show.

How to do it: Rounds from £185 (royalbirkdale.com); Room only at The Vincent Hotel from £98 a night (thevincenthotel.com). 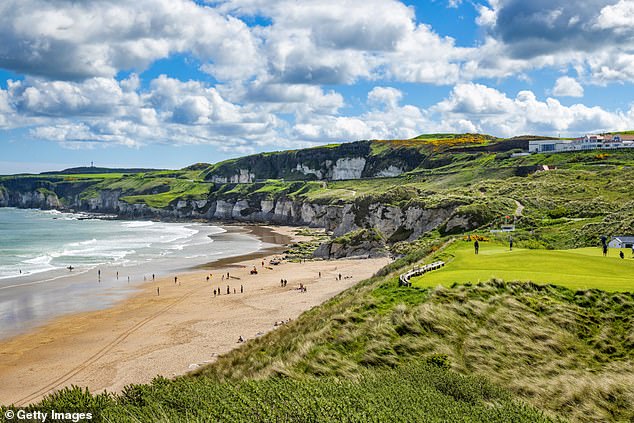 Golf on the edge: The glorious view from Royal Portrush in County Antrim near Giant’s Causeway

Royal Portrush is on a bumpy headland in County Antrim near Giant’s Causeway. Five-time Open champion Tom Watson once said: ‘It’s as pretty a course as you’ll ever play,’ and he wasn’t wrong. Some holes, such as the fifth, finish on greens feet away from the sandy White Rock beach offering sweeping views across the North Atlantic.

How to do it: Rounds from £100 (royalportrushgolfclub.com). Room only at the Golf Links Hotel from £130 a night (golflinksportrush.com).

Royal St George’s Golf Club in Sandwich, Kent, was the venue for the first Open Championship outside Scotland in 1894. It may appear easy on the eye, but Jack Nicklaus had his worst score as a professional here in 1981. Challenges range from blind holes and humps and bumps to dangerous fescue grass, and one of the most daunting bunkers on the Open circuit — the Himalayas on the fourth, which is 40ft deep.

How to do it: Rounds from £125 (royalstgeorges.com); Room only at the Bell Hotel from £71 a night (bellhotelsandwich.co.uk)

Established in 1869, Royal Liverpool or Hoylake in the Wirral was a horse racing track and a links golf course for the first seven years of its life and still has nods to its dual use. It’s a sprawling, wide-open, relatively flat and largely dune-less course, meaning it’s more exposed to the elements. Tiger Woods won the 2006 Open here shooting 18 under par, using his driver only once in the entire week.

How to do it: Rounds (fully booked until March 2023) from £100 (royal-liverpool-golf.com); Room only at The Resident Liverpool from £47 (residenthotels.com)