Food blogger reveals how she chased an ‘almost-impossible figure’

Health is the latest trend to be fetishised on social media, and it can often feel like everywhere you look there are photos of radiant fitness stars with chiselled abs and glowing skin.

But the truth behind such photos is often a lot darker, which is something food blogger, Sally O’Neil – known as The Fit Foodie online – wishes to highlight.

The 31-year-old from Sydney recently opened up about a period in which she started chasing the Instagram ideal – and ended up ‘incredibly sick’, weighing just 43 kilograms.

Sydney food blogger, Sally O’Neil (pictured), shared her battle with food with FEMAIL – which saw her become obsessed with healthy foods until her weight plummeted to just 43kg 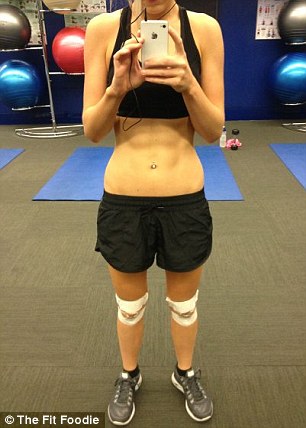 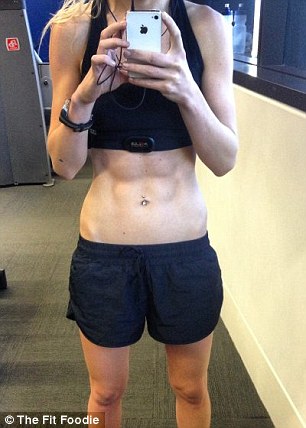 Sally (pictured previously when working out) explained that she became obsessed with getting abs – and would work out for two hours a day, burning hundreds of calories 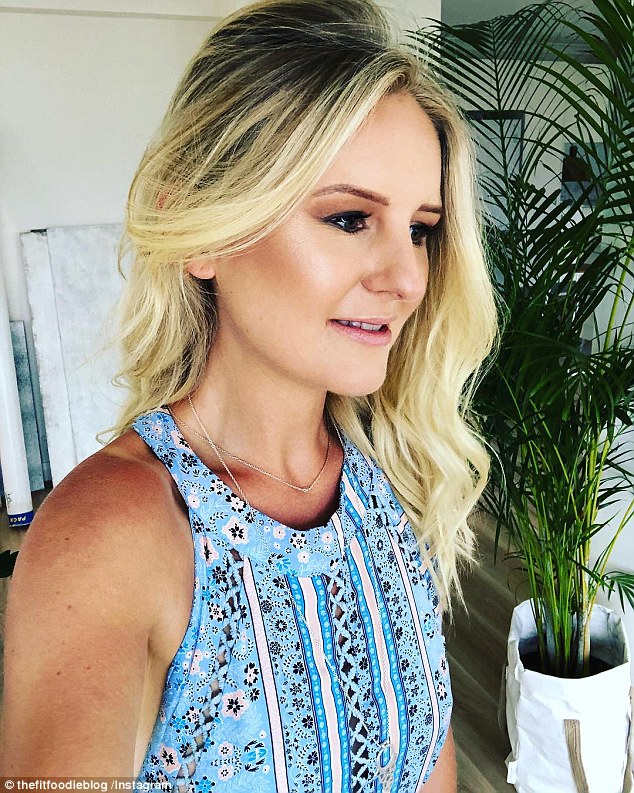 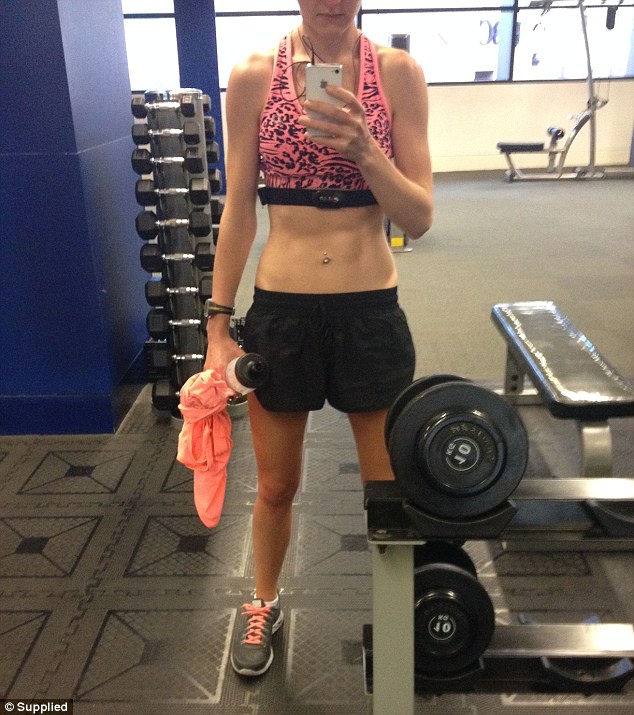 ‘The physiques we are bombarded with are, for the average woman, physically unattainable for those seeking good health,’ Sally explained to FEMAIL (pictured working out in the past)

‘I think it’s time we, as women, really acknowledged to ourselves that there is so much smoke and mirrors on Instagram,’ Sally told FEMAIL.

‘Comparing ourselves to what we see online can be incredibly damaging. We have to remind ourselves that what people (including myself) share online is highlight reel of their life – not candid shots.

‘It’s curated, often doctored and Photoshopped. The physiques we are bombarded with are, for the average woman, physically unattainable for those seeking good health.

She concluded: ‘It’s time we bridge that gap’. 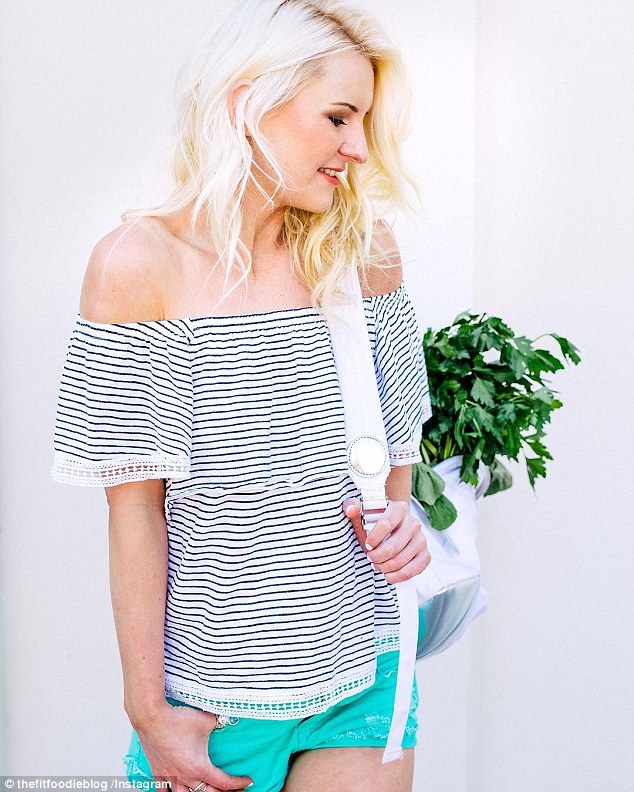 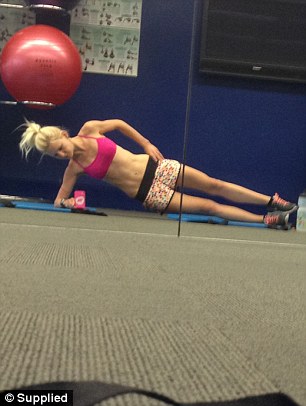 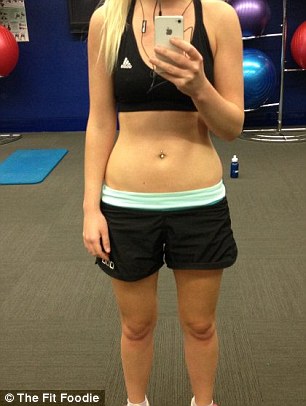 ‘In essence my body was in a deficit by 800 calories per day, and was starting to lose essential function,’ Sally explained – meanwhile, she was doing plenty of intense cardio 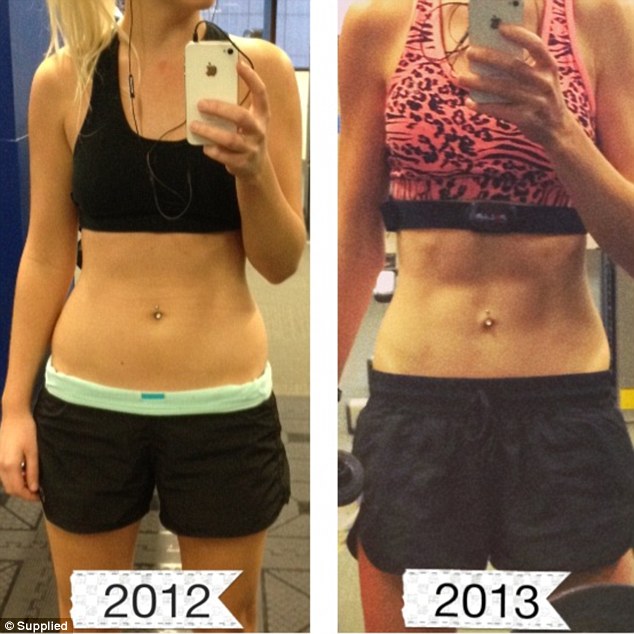 Sally (pictured in 2012 and 2013) saw a GP when her periods stopped; at first they thought it was anorexia, but it was later confirmed to be orthorexia

Speaking about how she first fell down the #fitspo hole, Sally wrote on her Fit Foodie blog that she was spurred on by the ‘words and selfies’ of ‘girls with perfect six-packs who demonstrated a level dedication to their exercise and diet that to date, I had simply not been able to reach’:

‘I’m The Fit Foodie. I’m supposed to be incredibly fit, and eat all the right things,’ Sally wrote in her post.

She confessed that she was led to believe that she could ‘absolutely have a washboard stomach too’ and so ’embarked on a gruelling program of exercise and dietary restriction’. 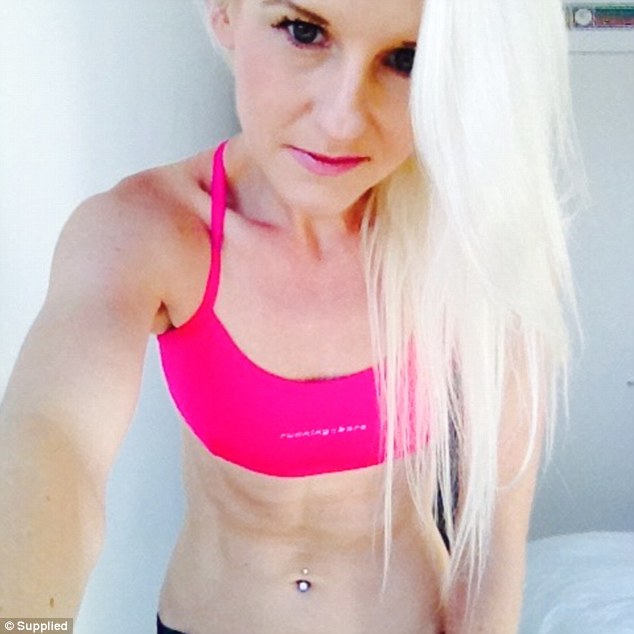 But while from the outside, compliments rolled in, Sally (pictured) said: ‘I got where I wanted to be, but I looked waif, and felt low. ALL. THE. TIME’ 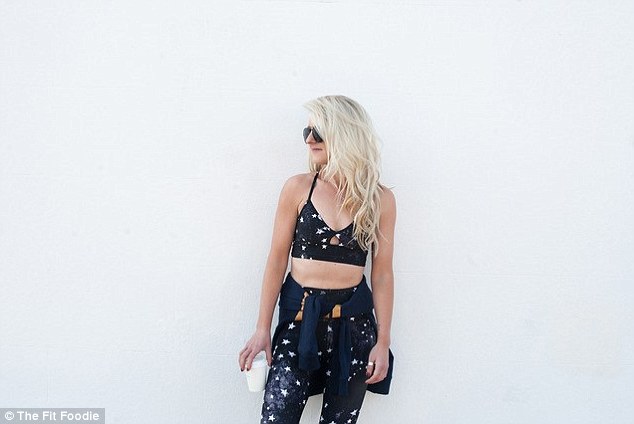 She underwent therapy for 12 months, but said she still feels moments of struggle around food (pictured today)

Constantly strapping herself to her heart monitor, the 31-year-old would work out for around two hours a day – with one of those hours being ‘intense cardio’.

Within three months, Sally’s frame shrunk from ’56kgs to 50kg’:

* Fitspiration – or #fitspo – was first created as a response to the unhealthy thinspiration.

* It is defined as a person or thing that serves as motivation for someone to sustain or improve health and fitness.

* It is broadly used on social media to inspire people to get fitter by eating healthily and doing more exercise.

But while everything was going well for a few months, Sally admitted that soon she become ‘more and more conscious of food, and more specifically of carbs’:

‘While I was the biggest advocate of sweet potato and brown rice for their nutritional gains, I couldn’t bring myself to eat them past breakfast time,’ she said.

‘My diet reduced to 1 x 30 grams sachet of quick oats with water and a small handful of blueberries with cinnamon. Lunch would be one boiled egg and asparagus. Dinner would be some kind of stir-fry with Konjac noodles and soy sauce, and a bit of chicken. I only drank green tea and water.’

‘I had power over my body, I could shape it in any way I chose, and I was going to get abs. They were slowly appearing and I was just as awesome as all the chicks on Instagram. Right?,’ she asked. 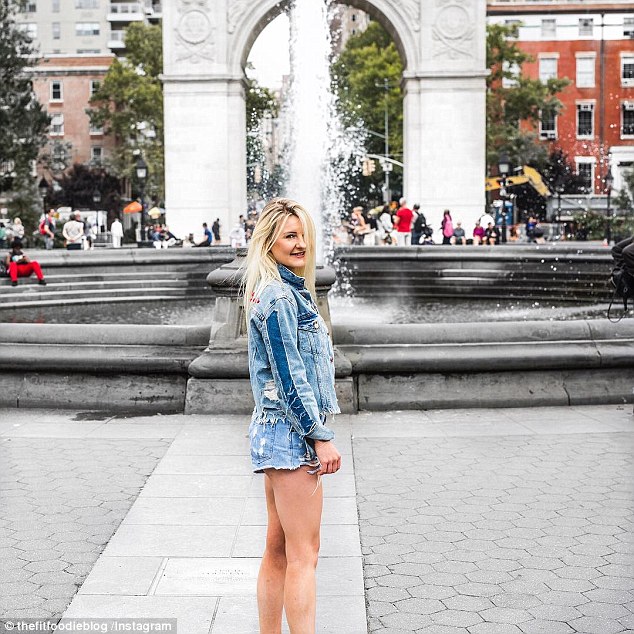 Today, Sally (pictured) blogs about food recipes and shares tips online with her thousands of followers 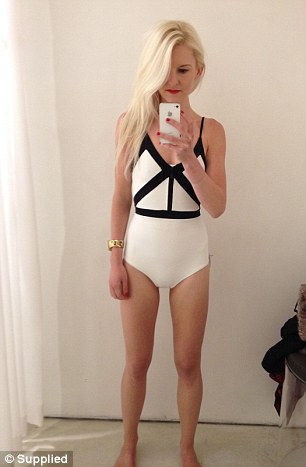 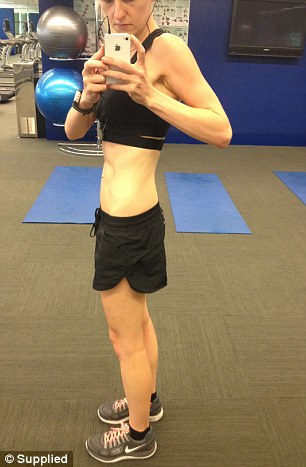 ‘I still want to think I’m chiselled and strong. But I’m no longer prepared to make the sacrifices it takes to get there. I made a choice to have a healthy mind, and the body that comes along with that – whatever that looks like,’ she said (pictured while previously working out)

* Although not formally recognized in the Diagnostic and Statistical Manual, awareness about orthorexia is on the rise and was first coined in 1998.

* Orthorexia means an obsession with proper or ‘healthful’ eating.

* Like anorexia, orthorexia involves restriction of the amount and variety of foods eaten, making malnutrition likely.

* Symptoms include compulsive checking of ingredients lists, nutritional labels and an inability to eat anything except a narrow list of foods.

* Someone with orthorexia might spend hours thinking about food and what might be served at an event.

* They will also be distressed when their foods aren’t available.

But deep down, things were not right.

At her worst, Sally weighed just 43kg, was living off salad and her periods had stopped:

Sally would refuse to eat out, would live on just 800 calories and would burn off around 600 of them daily.

‘In essence my body was in a deficit by 800 calories per day, and was starting to lose essential function,’ she revealed.

When a GP confirmed that Sally was, in all likelihood, anorexic, the food blogger felt confused – she was healthy and eating all of the right things.

A follow-up with a different doctor revealed that, in fact what Sally could be suffering from was ‘orthorexia’.

This is a desire to eat only ‘pure’ or ‘healthy’ foods. 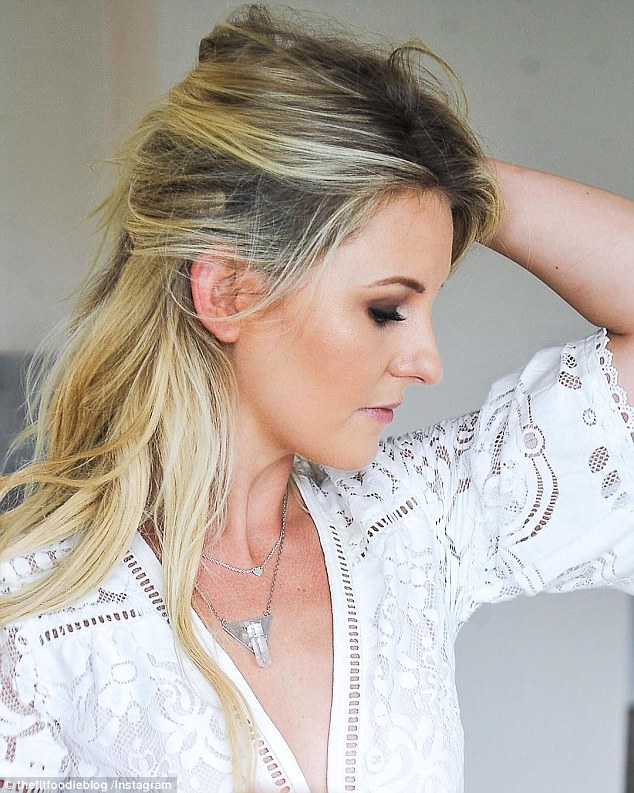 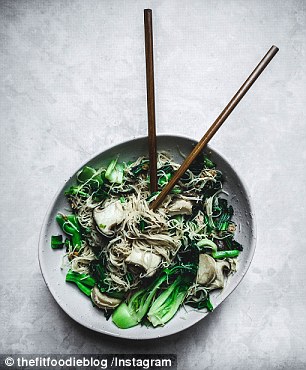 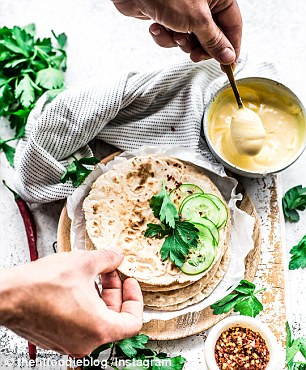 Instead, The Fit Foodie enjoys a predominantly wholefoods diet (pictured), alongside the occasional treat

The 31-year-old confessed it took her around 12 months to heal her relationship with food, in which period she underwent therapy to change her attitude.

And even though she is now in a healthy place, Sally confessed that she still has her moments and is sometimes ‘a little sad’ that she no longer has abs:

‘I still want to think I’m chiselled and strong. But I’m no longer prepared to make the sacrifices it takes to get there. I made a choice to have a healthy mind, and the body that comes along with that – whatever that looks like,’ she said.

For Sally, this is a 51kg frame – and someone who eats whole foods, alongside occasional treats.

Sally has a hugely successful food blog – The Fit Foodie – where she shares her delicious recipes, alongside her tips.

She also said she is a firm believer that ‘manipulating your body shape is not the road to happiness’.

If this article brings up any issues for you please contact the Butterfly Foundation on 1800 33 4673.