Food Secretary George Eustice insists food availability is ‘back to normal levels’ and reveals supermarkets are adding an extra 300,000 delivery slots – but admits even that will not be enough to meet coronavirus lockdown demand

Food availability is back to normal levels amid the coronavirus pandemic, the Environment Secretary insisted today.

George Eustice revealed supermarkets are adding an extra 300,000 delivery slots but admitted it will not be enough to meet lockdown demand.

There had been 2.1million timings before the crisis but that figure had been ramped up to 2.6million.

It will further increase to 2.9million as demand continues to rocket while Britons are locked at home.

George Eustice (pictured at the press briefing today) revealed supermarkets are adding an extra 300,000 delivery slots but admitted it will not be enough to meet lockdown demand

Mr Eustice told the Downing Street press briefing today: ‘The food supply chain has also seen a significant reduction in staff absence over recent weeks, as staff who had been self-isolating through suspected coronavirus have returned to work.

‘Absence levels are down from a peak of typically 20 per cent in food businesses three weeks ago, to less than 10 per cent at the end of last week, and, in some cases, individual companies reporting absences as low as 6 per cent.’

The Environment Secretary said the Government had been working with local authorities to ensure people in need of help can get the food that they need.

He continued: ‘We recognise that there are others that are not clinically vulnerable and therefore not in that shielded group, but who may also be in need of help. 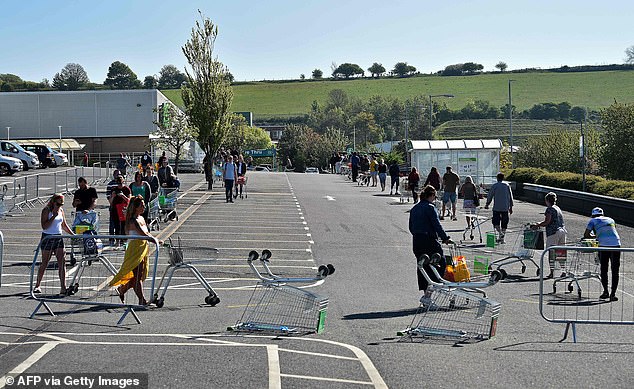 There had been 2.1million delivery slots before the crisis but that figure had been ramped up to 2.6million. Pictured: Shoppers in Asda in Brighton on Sunday

‘Perhaps through having a disability, or another type of medical condition, or indeed being unable to draw on family and neighbours to help them.

‘So we have been working with local authorities to ensure that those people can be allocated a volunteer shopper to help them get their food needs.’

He said charities can now make direct referrals on the Good Samaritan app to locate volunteers for those in need.

Although the international food chain is continuing to ‘work well’, the Environment Secretary said he expects there to be a need to recruit staff in the UK to harvest crops at the start of summer.

He told the briefing: ‘We’re also acutely aware that we’re about to start the British season in fresh produce, in soft fruits and salads.

‘We estimate that probably only about a third of the migrant labour that would normally come to the UK is here, and was probably here before lockdown.

‘We are working with industry to identify an approach that will encourage those millions of furloughed workers in some cases to consider taking a second job, helping get the harvest in in June.’

He added: ‘It’s not an issue at the moment since the harvest has barely begun, but we do anticipate that there will be a need to recruit staff for those sectors in the month of June.’