‘Food will rot in the fields’ unless 80,000 farm labour vacancies are filled

British crops may ‘rot in the fields’ unless 80,000 farm workers are found, a farming association has warned – with a private charter plane of 180 Romanian fruit pickers due to land at Stansted airport tomorrow to tackle the shortages.

The stark warning comes after producers issued a nationwide appeal for Brits join a new ‘Land Army’ of farm workers to pick fruit and vegetables amid the coronavirus lockdown.

Around 80,000 workers are required every summer to work the fields, with British farmers usually being able to call on seasonal workers from Europe.

However, with the coronavirus pandemic stopping commercial flights and causing lockdowns all over the continent, farmers have appealed to Brits, many furloughed and not currently working, to fill the gap.

But some farmers are still struggling, prompting one Lincolnshire-based food producer to charter a private plane of 180 Romanian fruit pickers, which gets into Stansted tomorrow.

Though more than 30,000 workers have signed up to pick crops this summer, only 4,000 have actually interviewed for a job (file photo) 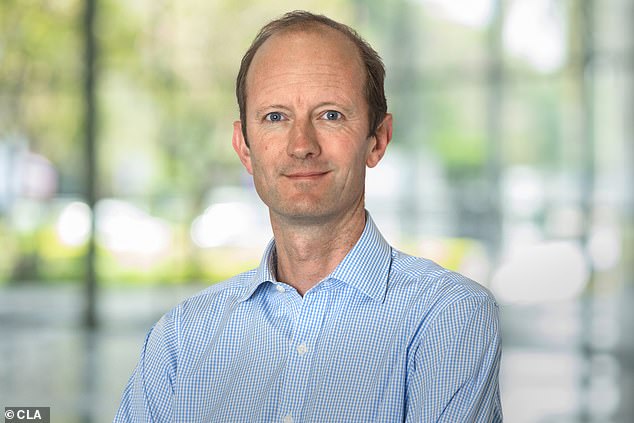 They will then be taken to Lincolnshire by bus, with the flight believed to be just the first of six.

The Country Land & Business Association has admitted the number of British volunteers is still not enough, with a spokesman telling Mail Online that they wouldn’t be surprised if more foreign workers are flown in to avoid food ‘rotting in the fields’.

CLA President Mark Bridgeman said: ‘Over 30,000 people have come forward to help farmers, following the call to ‘Feed the Nation’, through the COVID-19 pandemic.

‘This is great news and shows a tremendous attitude at these difficult times. But this excellent response in not enough – we need 80,000 people to ensure fruit and vegetables are picked on time this summer.

‘Where it is possible and safe to do so in the current circumstances, bringing in workers from overseas to help meet the shortfall is the right thing to do if we want to keep the supermarkets stocked.

‘However we would strongly encourage people from across the country to keep coming forward and signing up with recruitment agencies. 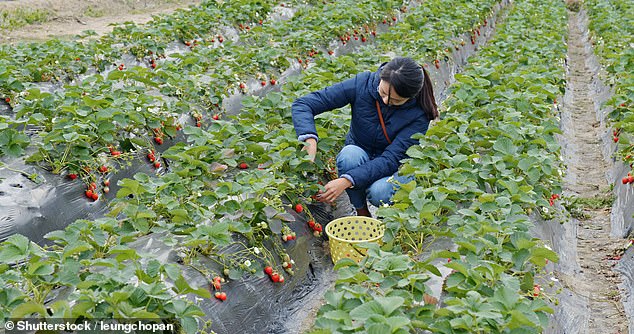 A charter plane of about 180 Romanian fruit pickers is due to land at Stansted tomorrow to fill labour vacancies to keep up with demand amid the coronavirus crisis. Stock picture

‘There are good jobs available and great opportunities for those currently furloughed, unemployed or students.’

Tomorrow’s flight is coming from Bucharest to London.

Air Charter Service has confirmed that it has booked the first service to carry easter European workers to the UK, according to The Times.

The workers on the Boeing 737 will be taken by bus to farms across the southeast of the UK and Lincolnshire.

Passengers on board the aircraft will be required to maintain social distancing guidelines and will not be allowed to leave Romania if they display any symptoms of Covid-19.

The move has shone the spotlight on the so-called ‘Land Army’ initiative, which was supposed to fill Britain’s farming needs with British workers currently at home amid the lockdown.

The ‘Land Army’ scheme is being led by Concordia, a charity which provides seasonal labour for farms, as well as HOPS and Fruitful.

Concordia says almost 90 per cent of applicants are British citizens – and half have either been furloughed or out of work completely because of coronavirus. 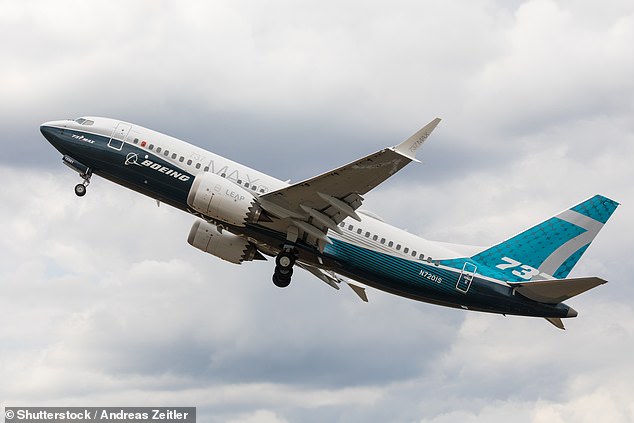 The plane coming from Bucharest to London tomorrow is the first of up to six which will arrive in the coming months so that UK farms stay staffed with labourers. Stock picture

Stephanie Maurel, the chief executive of Concordia, said pickers earn an average of £350 a week for around 40 hours of work.

The least they will be paid is the national minimum wage of £8.72 per hour – but the faster workers could be paid up to £15 per hour depending on how much they pick.

The working day will begin between 5am and 6am, finishing in the early afternoon to avoid physical work in the hottest part of the day,

A spokesman said: ‘Concordia is working with Fruitful and HOPS to help find people to fill positions on UK farms.

‘Successful applicants will receive training on the farm (and are paid to undertake this training) and can be assured that all farms, many of which are open fields, are following the correct procedures around safe working conditions during the Coronavirus outbreak.

‘Housing is always provided although participants do not have to take it up.’

‘To date we have had more than 32,000 applications of interest in the programme – from people all over the UK, and beyond.

‘Of those 13% are then opting to interview for a role (an automatic process) – currently just over 4,000. We are now matching these people to roles and placing them on UK farms. 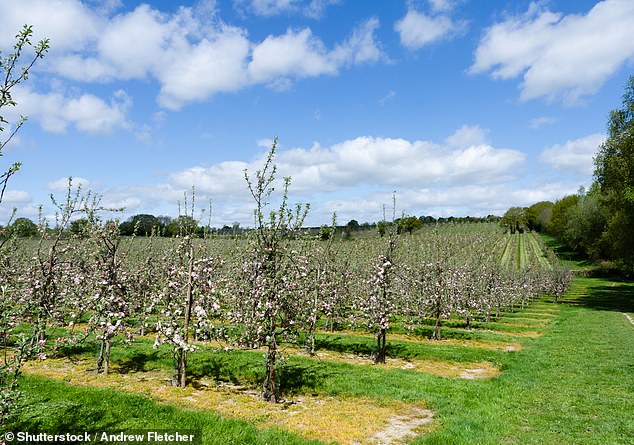 ‘Almost 90% of applicants are from UK citizens. Half of whom have lost their livelihoods due to the COVID-19 outbreak. Only 30% have worked in farming in the past.’

The British Growers Association says around 6,000 pickers are needed from mid-April to pick asparagus, and the same again to pick salads and lettuce.

Next month tens of thousands will be needed cauliflowers, cucumbers and spring greens and other common vegetables like onions.

Farmers and food plants hit with staff shortages will be allowed to recruit furloughed workers from other businesses to ‘feed the nation’.

The move comes in response to warnings of chaos in some sectors and fears crops will be left to rot in the fields.

Thousands of businesses, from retailers to pubs, have put their staff on furlough, which means the taxpayer will pay them 80 per cent of their wage.

Originally, this payment was denied to the company if these workers went on to find a second job to bring in cash.

However, the Treasury has updated its guidance to say: ‘You may undertake other employment while your current employer has placed you on furlough, and this will not affect the grant that they can claim under the scheme.’

The net effect is that people on furlough could receive 80 per cent of their pay from their main employer while collecting a second wage for fruit picking.

Importantly, these people must be able to return to work for their main employer as and when required.

It comes as the Government’s watchdog, the Office for Budget Responsibility, today warned the economy could shrink by more than a third this quarter alone with two million people made jobless if the lockdown continues for two more months.

Shocking analysis from the OBR underlines the trade-offs being made to combat the deadly disease by putting the country into lockdown.

It warns curbs staying in place for three months will slash GDP by 35 per cent, with unemployment soaring to 10 per cent and the government’s deficit hitting £273billion – the highest level since the Second World War.

The watchdog ominously said it was assumed ‘for now’ there will not be any permanent economic damage, and much of the crash will be unwound as pent-up demand is unleashed when the lockdown finally ends. However, the resulting 13 per cent year-on-year drop will still be worse than anything in the last century.

Responding to the chilling scenario – which emerged as the International Monetary Fund (IMF) predicted the worst global downturn since the Great Depression in 1929 – Chancellor Rishi Sunak said: ‘People should know there is hardship ahead.’

The apocalyptic figures emerged after Dominic Raab moved to quash the idea of an imminent loosening, with the UK now facing restrictions until at least May 7.

But there is growing alarm about the potential death toll from economic misery, with life expectancy set to take a major hit. Doctors have also warned that suspending all non-urgent NHS operations to focus on coronavirus cases means more cancer and heart disease patients will die.

The Cabinet is divided over whether to push to ease the lockdown soon, with some saying the public is obeying social distancing too well and that people must be urged to keep working where possible.

But concerns have been raised that it is impossible to lift the curbs at the moment anyway because the public is so strongly in favour of them staying in place, and would simply refuse to go back to normal.