Amateur Australian cooks are raving about the discovery of a budget supermarket buy that tastes just like the ‘best ever pub gravy’.

The Maggi Rich Gravy Mix is sold in a two kilogram tub, makes 20 litres of gravy, or 400 serves and is sold at IGA stores, some independent grocers and on Amazon for $27.

One mum who shared a photo of the product to a popular Facebook group said the powdered mixture ‘lives up to the hype’ that has been surrounding the gravy on social media.

The Maggi Rich Gravy Mix is sold in a two kilogram tub, makes 20 litres of gravy, or 400 serves and is sold at IGA stores, some independent grocers and on Amazon for $27

‘Hands down best ever pub gravy,’ the woman said, adding: ‘My local IGA sells it.’

The powder quickly transforms into a thick, tasty gravy after being combined with boiling water. 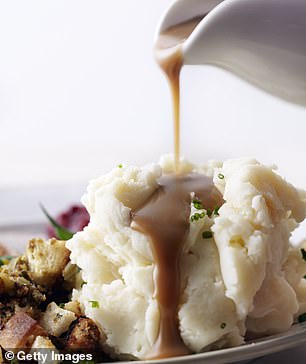 The food item is also available in a chicken or vegetable flavour and gluten free option, but the beef choice seems to be the most popular.

Other women part of the ‘Mums Who’ Facebook group were eager to try the mixture themselves, while some said they have been purchasing the product for years.

‘I get it online from snackezy its amazing,’ one woman said

‘The only gravy we use,’ another said

A third added: ‘Best gravy ever, nothing else tastes so good or is so easy to make.’

‘I’ve been buying this for many, many years and in the largest tub too,’ another said.

As the powder creates hundreds of serves, it’s ideal for large families or groups of people.