Foods you should eat (and avoid) to maximize your workouts

Achieving fitness goals can be much easier if you know how to time your meals so that you are energized during your workouts.

Figuring out how often, what time and how much to eat can affect the progress you make in the gym.

And on top of that, it is crucial to decipher which foods really are ‘healthy’ – many are branded as such but are high-calorie and loaded with sugar.

Daily Mail Online spoke with fitness and nutrition experts who gave advice for what to eat to maximize your workout and busted common myths about ‘health foods’ that can hinder your performance at the gym. 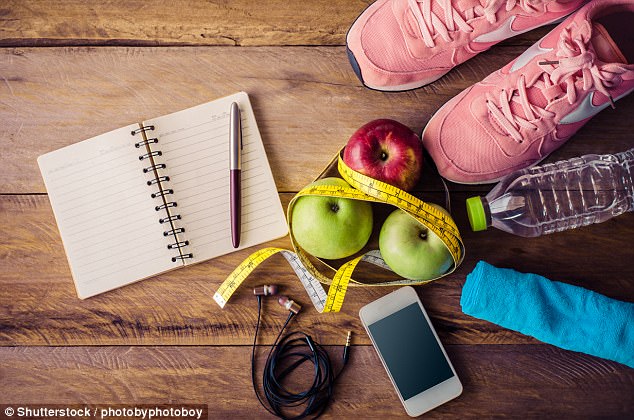 Nutrition expert Nikki Ostrower stressed the point that your snacks can make a huge difference in your workout performance.

‘Pre-fueling and post-fueling are so crucial,’ Ostrower said. She recommended eating a snack 30 minutes to an hour beforehand. Specifically, she suggested eating a slow-burning carb and protein or a healthy fat.

SNACK IDEAS FOR PRE- AND POST-WORKOUT

30 minutes to an hour beforehand:

Dietitian Amy Shapiro said that she also recommends eating beforehand, but that the amount that you eat should be based on how much time there is between your snack time and your workout.

‘The closer you get to the workout, the smaller the snack should be,’ she said.

Shapiro also said that if you are tired you should consume caffeine 30 to 90 minutes before you exercise, since that is how long it takes for caffeine to kick in.

And just as important is what you put in your body after you sweat, when your body is tired. ‘Eat immediately to replenish your muscles,’ Ostrower said.

While eating healthy foods before and after a workout can improve your performance, eating clean on a consistent basis is key.

This was fitness coach Brent Carter’s first piece of advice for how to maximize your workout. ‘This sounds really lame and boring but: eat a well balanced meal,’ he said.

Ostrower echoed this, saying: ‘We want to make sure our meals are balanced, while also being human.’

Carter added that it is important to make a decision about how strict and disciplined you can be and stick to it.

‘People should pick the nutrition strategy they know they are capable of sustaining,’ Carter said, adding that consistency is key for achieving long-term fitness goals.

ARE THESE ‘HEALTH FOODS’ HEALTHY?

While most health foods do have some benefits, it is important to know that many do not have great nutritional value and can lead to digestive problems.

The following are examples of some health foods, the effects of which are not black and white.

All three of the experts stressed that just because something is green does not make it healthy.

Ostrower said her clients usually believe green juices are healthy but they typically are not. She said that the juices do not have fiber and that they have too much sugar.

She also mentioned that people usually think nut milks are a superior choice to dairy products but that they usually have too many artificial preservatives.

Another drink that people should avoid is Gatorade, according to Shapiro. ‘Drinking Gatorade is just like drinking soda,’ she said, explaining that there is a misconception that it boosts your health.

The experts also mentioned foods that their clients believe are ‘healthy’, even though their nutritional value is scant.

Shapiro said that protein bars, which most people think are good for you, have excess sugar and are usually 250 calories.

Additionally, Ostrower warned to watch out for salad dressings, especially oil based varieties. ‘People think just because you’re getting a salad it’s healthy. It’s like piling on inflammation on a beautiful salad,’ she said.

Another myth that Carter said is not true is the idea that spreading your main meals out over the course of the day makes a difference.

‘This whole eating six meals throughout the day – that’s no more effective than three meals,’ he said, adding that, for that matter, eating one large meal would not make a difference either, as long as you are still consuming the same amount of calories.