Footage of British explorer Benedict Allen hacking his way through the thick Papua New Guinea jungle alongside a group of local guides shortly before being rescued and taken back to Britain has emerged.

The video, taken by Allen with the same camera he had used to record a will for his family, shows the jungle-trotter hacking his way through the thick bush led by local guides.

He is seen unsteadily trying to cross a bridge made of vines and rope which hangs over a tremendous drop into river beneath.

‘We’re now checking to see if there’s a bridge we can cross. Well it’s a bridge, but not quite finished,’ he says in the footage.

‘If it breaks, what I’ll do is hang on to one of the poles.’

Mr Allen, who was weak from malaria, was rescued by helicopter and to their surprise the rescue was filmed by him as it was landing on the remote airstrip.

The nail-biting video was posted on his website for his upcoming Ultimate Explorer 2018 UK Theatre Tour.

The 57-year-old, who has three children, was hoping to find the Yaifo people, who are believed to be the last tribe on earth to have no contact with outsiders, for a BBC documentary.

He was reported missing after he failed to board a flight back home via Hong Kong in November last year and hadn’t been heard from for three weeks.

Speaking afterwards, Mr Allen said that he ‘did not need to be rescued’ and that he knew exactly where he was but recounted a number of serious mishaps on his solo expedition

He said that a massive storm which swept away a vine bridge over a river so he was ‘slowed down.’

He had also started to feel the symptoms of malaria and his tablets had become sodden in the wet.

He then discovered there was a war going on ahead of him and ‘he could not get out.’

But he later rubbished claims it wasn’t a publicity stunt and said he did in fact need rescuing.

He was picked up by a helicopter crew hired by the Mail three weeks after he left Heathrow airport bound for the jungle.

He filmed an appeal on his video camera asking for a message to be taken to the British High Commission and his children if he died. 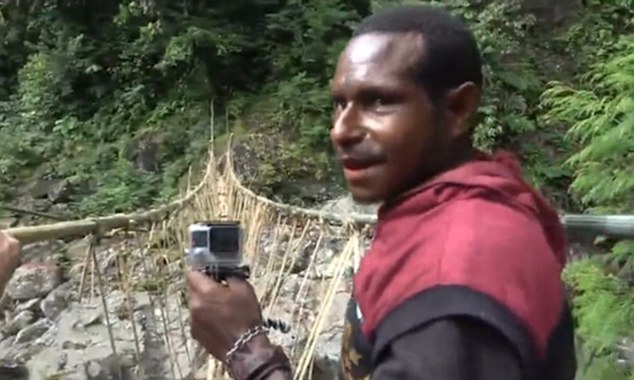 Local guides lead the 57-year-old explorer through the treacherous jungle. Here, they are seen walking over a bridge made of vine and rope