Incredible footage has shown entire roads underwater in Alice Springs as Australia’s east coast braces for a massive rain bomb that has taken roofs off homes and knocked out power for thousands.

Alice Springs’ Todd River burst its banks on Wednesday as 100mm of rain fell in 24 hours – the wettest November day on record for the desert town.

The powerful low pressure system is expected to bring a month’s worth of rain in a day as it reaches parts of western and central NSW on Thursday and the coastline by Friday morning.

NSW SES Assistant Commissioner Dean Storey said large parts of the state were in the firing line, with the Northern Tablelands and Central West among the regions of greatest concern.

WaterNSW have started releasing large volumes of water from the state’s dams – which are nearing full capacity – in preparation for the ‘significant rain event’.

Sydney and Melbourne are expected to miss the worst of the rainfall, but authorities in Victoria say there are concerns the Gippsland region could experience severe flooding.

Pictured is the swollen Todd River in Alice Springs, which broke its banks this week as 100mm of rain fell in the town in just 24 hours

‘There are 18 flood watches in place this morning and three flood warnings,’ he told the Today show on Thursday morning.

‘This will very likely increase as the day goes on.’

The weather system is also expected to cover the entire Queensland coastline on Thursday night, where Rockhampton recorded 341mm of rain on Wednesday.

Severe warnings for heavy rainfall are in place for the NSW Riverina and southern Queensland’s Darling Downs and Granite Belt regions.

‘If you live in a flood prone area, plan now,’ Mr Storey said.

‘We’re going to see a combination of flash flooding – which is unpredictable and can come on really quickly – and river flooding.’

Parts of Queensland, NSW and Victoria have already been hit with a ‘phenomenal amount of rainfall’, Bureau of Meteorology forecaster Jonathon How said. 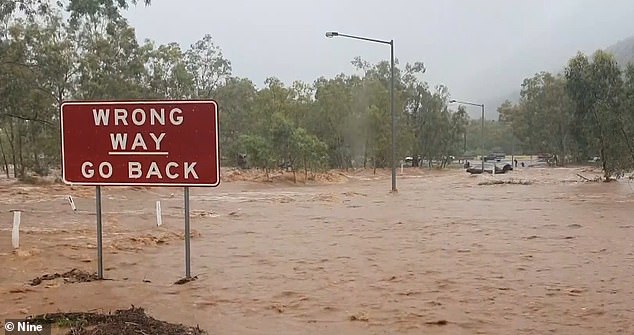 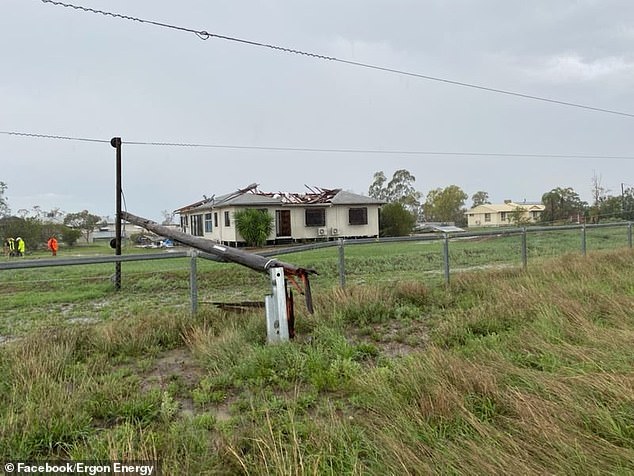 A home in Roma, in Queensland’s southern Maranoa Region has been lashed with heavy rain, with one unlucky homeowner losing their roof to the extreme conditions (pictured)

The extreme weather bringing heavy rainfall, flash flooding and unseasonably cool temperatures is being driven by a large tropical air mass over warm waters in Indonesia and Northern Australia.

Senior meteorologist Jane Golding at the Bureau of Meteorology said at the same time there is also a ‘very deep low pressure system over South Australia that’s tracking towards NSW’.

‘The combination of these two systems will bring wet and stormy weather to NSW and we’re expecting some very intense rainfall in some areas and potentially some very cold air to follow it,’ she explained.

The wild weather has caused chaos for commuters across the east coast with the State Emergency Service reporting 130 calls for help on Wednesday.

Temperatures will remain unseasonably cold with the mercury lagging 16 degrees below average for ‘days on end’, said Mr How.

‘In addition, thunderstorm warnings will be issued in coming days and some storms may have the potential to produce life threatening flash flooding and damaging to destructive winds. 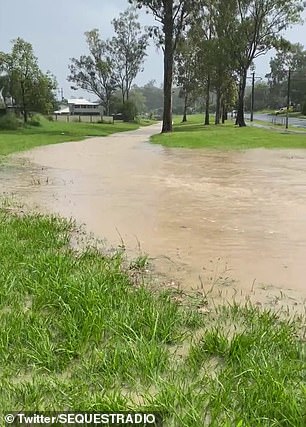 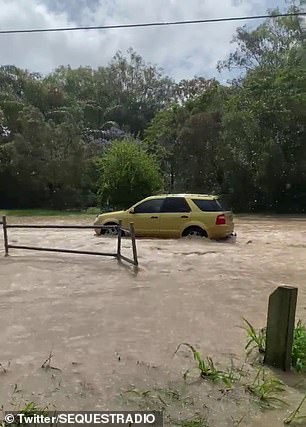 Residents in the suburb of Goodna, west of Brisbane, are battling flash flooding (pictured) 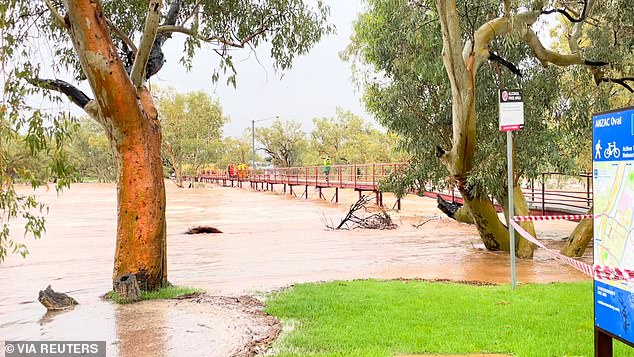 Pictured: A view of the swelling Todd River in Alice Springs in the Northern Territory

‘Expected rain will lead to riverine flooding and flood watches are current for the interior and towards the coast.’

Those who live in areas such as Tamworth, Moree, Inverell, and Narrabri have been warned to expect very heavy rainfall.

While Sydney will receive its fair share of showers, there are currently no severe weather warnings in place.

Ergon Energy estimated at least 3,500 homes lost power in the thunderstorms while one unlucky homeowner received significant damage to their roof.

Flash flooding has forced the closure of the major Bruce Highway with showers in the Wide Bay and Burnett and Darling Downs and Granite Belt districts.

The Bureau of Meteorology recorded a staggering 340.8mm of rain in Samuel Hill on Queensland’s Capricorn Coast in the last 24 hours. 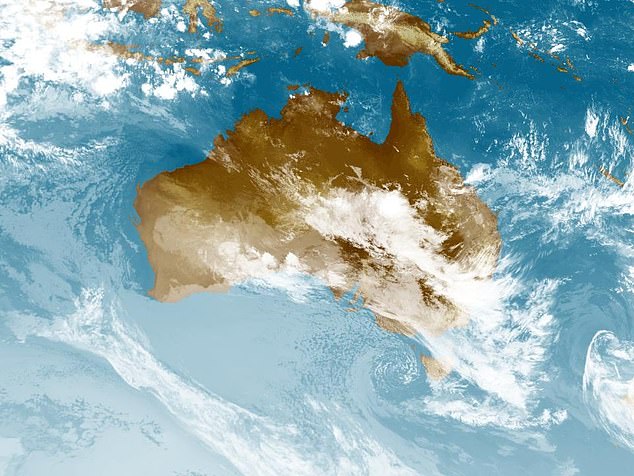 ‘Conditions are expected to worsen tomorrow (Thursday) and could cause dangerous flash flooding and riverine flooding,’ the Bureau of Meteorology has warned 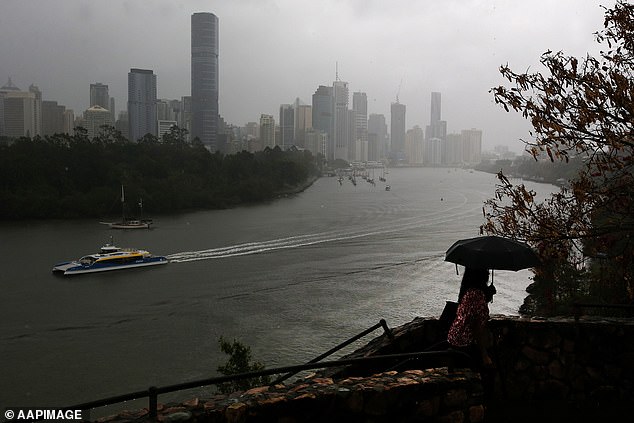 Other areas have received their highest rainfall totals in a decade with predictions the worst will hit in a three-day rain event.

The Sunshine State has been put on high alert for major flooding as an extreme weather system is due to deliver weeks worth of rain in just a few days.

‘Tomorrow is the big day,’ Bureau of Meteorology’s Heather Reid warned on Wednesday. ‘It will be a much wetter day.’ Vast tracts are set for a downpour, stretching from the Eastern Desert areas in Western Australia into the Northern Territory, South Australia’s north-west, and the North-East Pastoral Districts (pictured)

However Queenslanders can expect the extreme conditions to ease on Friday and through the weekend as the low pressure system moves away.

Brisbane is predicted to receive 30mm of rain on Thursday and another 25mm on Friday, however areas closest to the Queensland-NSW border will be most affected.

People have been urged to check the weather warnings in their area before taking to the roads and to avoid driving through floodwater. 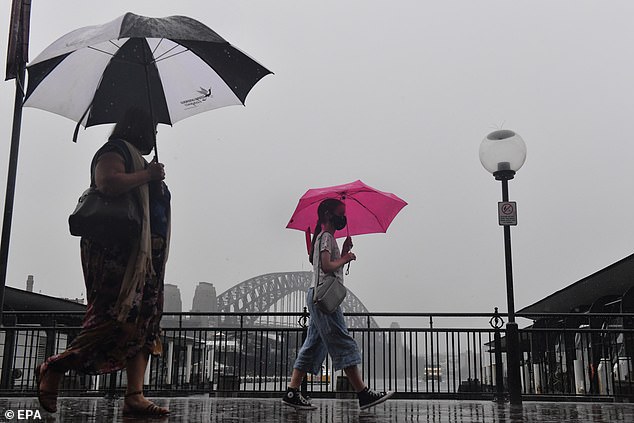 People have been urged to check the weather warnings in their area before taking to the roads (pictured, pedestrians in rainy Circular Quay)

On a positive note, the wild weather is predicted to ease on Saturday morning, but could be followed by cold air and strong gusts of wind.

This could potentially mean snow could fall on low-lying regions south of NSW.

The Bureau of Meteorology is expected to declare a La Nina event for Australia this year, making it back to back La Ninas after similar rainy weather patterns last year.

Rainfall is typically 20 per cent higher over Eastern Australia during a La Nina.