A video of the King and Queen Consort’s wedding day shows a jubilant Prince Harry throwing confetti over the happy couple as they emerged from St George’s Chapel as Harry claims he and William were not in support of the marriage.

In his long awaited memoir Spare, due for release in the UK tomorrow but accidentally published already in Spain, Harry claims he and Prince William ‘begged’ their father not to marry the Queen Consort.

Last night, in his tell-all interview with Tom Bradby on ITV, the Duke of Sussex said he was ‘at peace’ with his father’s second marriage as the couple seemed ‘happy’ – however in the memoir he accuses his stepmother of playing ‘the long game’ to marry Charles.

But a video from the King and Queen Consort’s wedding day paints an altogether different picture as Harry was filmed jubilantly throwing confetti over the newlyweds while they got into a car with ‘just married’ written on the back.

The video, filmed on Charles and Camilla’s wedding day in Windsor in 2005, shows Harry standing with William as their father and stepmother walk past, about to get into the Rolls Royce which has been covered in red, white and blue balloons.

In the next clip, a cheeky, 20-year-old Harry runs up to his father from behind and, with a look of mischief on his face, tosses a handful of confetti over the couple.

Prince Harry has made accusations about his stepmother in his memoir and in two tell-all interviews in the US and the UK, including that he and William begged their father not to marry Queen Consort Camilla. But despite these claims, footage from Charles and Camilla’s wedding day shows and exuberant Harry smiling. Pictured: Harry and William on Charles and Camilla’s wedding day outside Windsor Guildhall in 2005

Harry is pictured laughing as his father drops his head to shield his face from the confetti, as they get into the car.

In the next clip, the couple drive off through crowds while Harry and William are seen applauding with smiles on their faces.

The footage of a jubilant Harry is somewhat at odds with his description of the union in Spare, in which he claims he and William ‘begged’ Charles not to marry Camilla and feared she would become the ‘wicked stepmother’.

He wrote: ‘She began to play the long game, a campaign aimed at marriage and eventually the crown, with Pa’s blessing, we presumed.’

Separately, Harry has denied he wrote ‘just married’ on his father and stepmother’s car. In the footage, the car has been decorated, but it is unclear who has done this.

During his bombshell interview with Tom Bradby on ITV last night, Harry’s comments about his father’s second marriage were somewhat more nuanced when he was asked about his feelings.

When Mr Bradby asked the Duke if he was ‘at peace’ with Charles and Camilla’s union, he replied: ‘100%.’

He said: ‘William and I wanted our father to be happy and he seemed to be very, very happy with her.’

The Duke added: ‘The two of them.. remain very happy together’ despite the fact he and William ‘asked him not to marry her.’

He reveals in the memoir that he and William were in support of the relationship itself, but they did not want their father to wed Camilla. 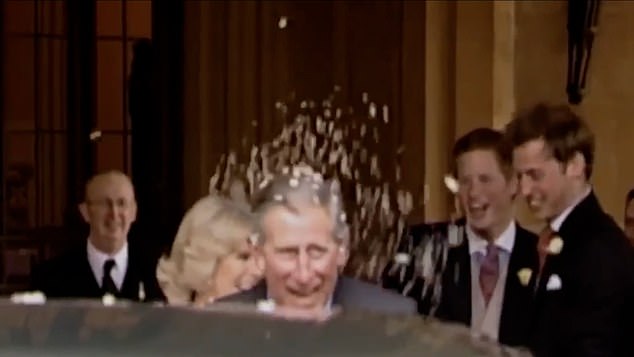 Footage from Charles and Camilla’s wedding day shows Prince Harry and Prince William looking jubilant as Harry sneaks up to his father from behind and throws confetti over him. In his interview with ITV’s Tom Bradby, Harry says he was ‘100%’ happy for the couple on their wedding day, but in his memoir he accuses Camilla of playing the ‘long game’ towards marriage 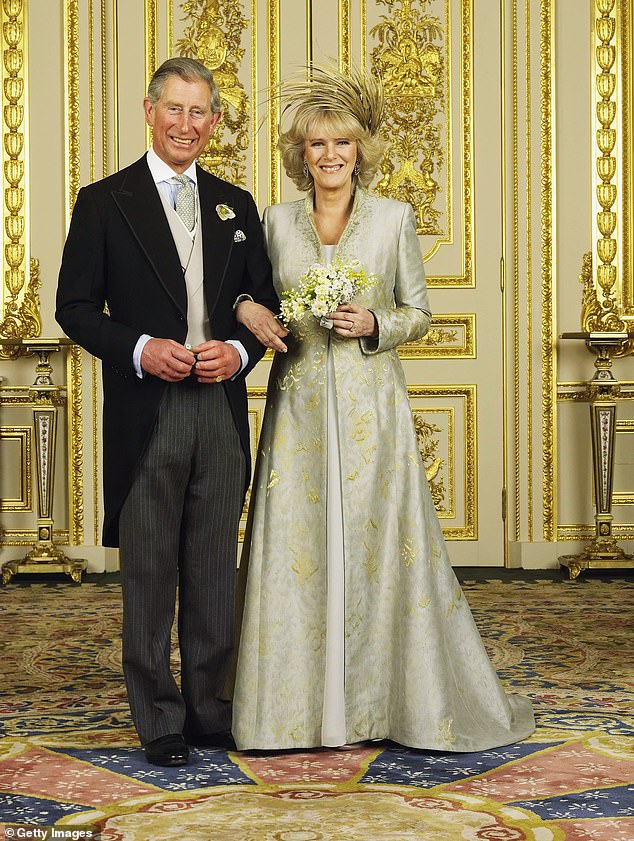 Addressing his stepmother in his memoir, Harry also accused her of leaking stories to the press about private conversations – particularly those with William.

He wrote that the stories had contained ‘pinpoint accurate details’, adding that they had not been shared by his brother William.

The Duke claimed: ‘They could only have been leaked by the one other person present.’

Despite his explosive claims, Harry denied that any of his accusations were ‘scathing’ towards any members of his family.

Another accusation the Duke has reportedly levelled at his stepmother is that she allegedly turned his bedroom at Clarence House into a dressing room.

Page Six reported Harry made the accusation, adding he ‘tried not to care’ but that the conversion of his old bedroom had hurt his feelings.

Following the Duke’s explosive revelations in the ITV interview, he resumed his blistering attack on his stepmother in a second sit-down with US journalist and presenter Anderson Cooper, which aired overnight.

Harry told 60 Minutes: ‘[Camilla] was the villain, she was a third person in the marriage, she needed to rehabilitate her image.

‘That made her dangerous because of the connections that she was forging within the British press.

‘And there was open willingness on both sides to trade information and with a family built on hierarchy, and with her on the way to being Queen Consort, there was going to be people or bodies left in the street because of that.’

He also elaborated on his and William’s plea to their father not to marry Camilla, telling his interviewer: ‘We didn’t think it was necessary. We thought it would do more harm than good.’

Camilla’s public image has changed dramatically over the years since she was cast as the third person in the marriage of the then-Prince and Princess of Wales due to her affair with Charles.

In 1994, Charles had confessed to adultery in a TV interview with broadcaster Jonathan Dimbleby, but only after his marriage had ‘irretrievably broken down’.