This is the incredible moment a brave explorer took a stroll across a terrace of psychedelic-coloured sulphur pools in the middle of a desert.

Bridget Thackwray, 25, who is one half of New Zealand travelling duo Expedition Earth, has been exploring the Danakil Depression in Ethiopia – one of the lowest, hottest and generally hellish locations in the world.

Bridget and her travelling partner, Topher Richwhite, 33, shot the spectacular footage in June and she can be seen walking around the other-worldly and very dangerous looking ponds with bare legs and on very narrow strips of rock.

Bridget Thackwray, 25, who is one half of New Zealand travelling duo Expedition Earth, is pictured walking amid bubbling sulphur pools in the Danakil Depression in Ethiopia 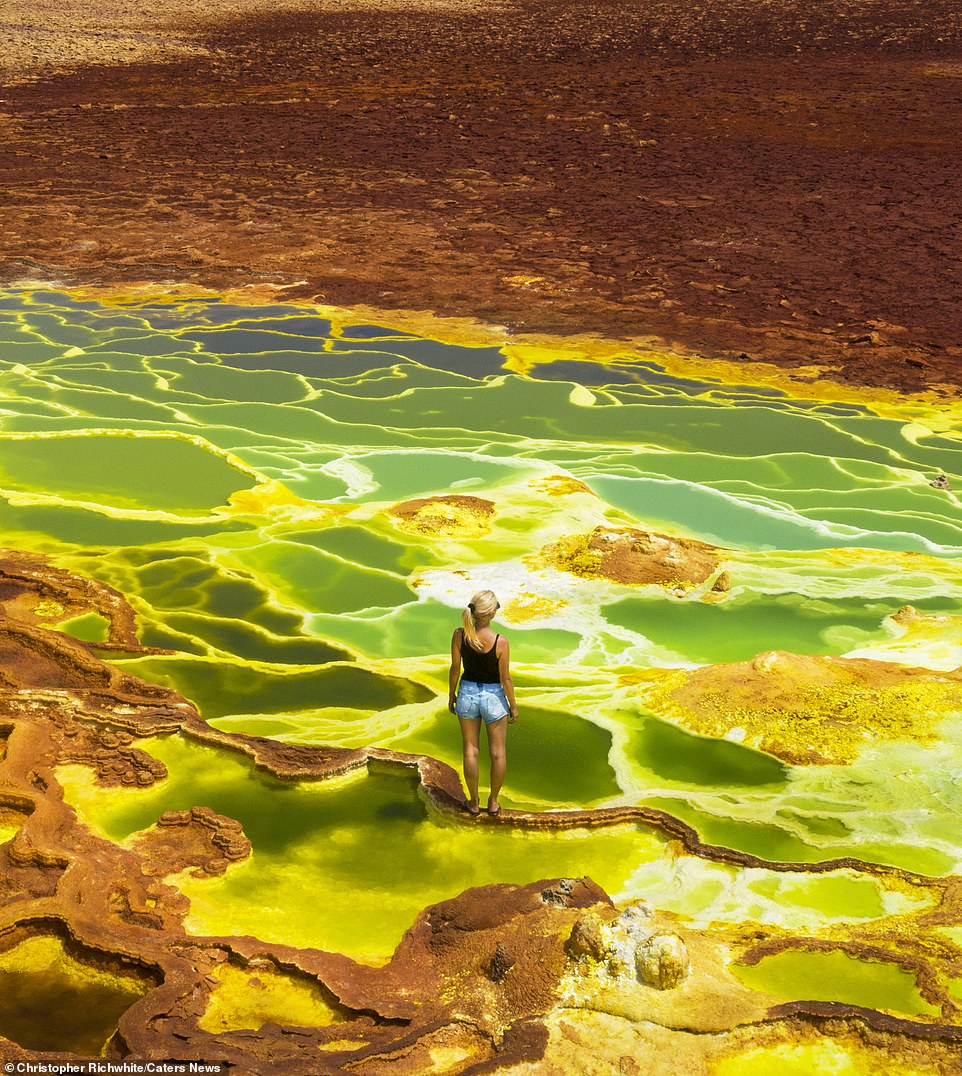 The camera then pans out to show just how vast and arid the area is. Plumes of smoke can be seen swirling up from the ground as the hyper-acidic yellow and green pools undulate.

Bridget said: ‘The sulphur fumes burn your lungs when you breathe whilst you are close to the terraces.

‘It was a very uncomfortable experience.

‘There is a constant hot breeze blowing, with more fumes, so the only way to take cover was behind a few alien-like rocks dotted around.’

She added: ‘We were unsure what the liquid in the pools consisted of, so we did not touch it.

‘However, it was continuously bubbling and puffing steam, we could tell it was hot.’

The Danakil Depression, which is 127 metres below sea level, was formed from the divergence of three tectonic plates in the Horn of Africa.

It has been referred to as ‘the cradle of humanity’ following the discovery there of a hominin fossil – named Lucy – dating back 3.2 million years. 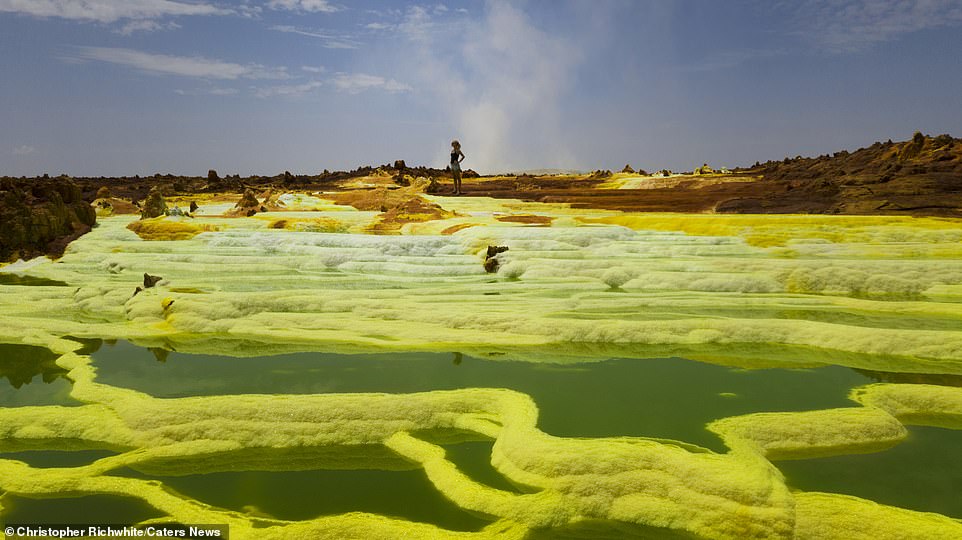 The Danakil Depression has been referred to as ‘the cradle of humanity’ following the discovery there of a hominin fossil – named Lucy – dating back 3.2 million years 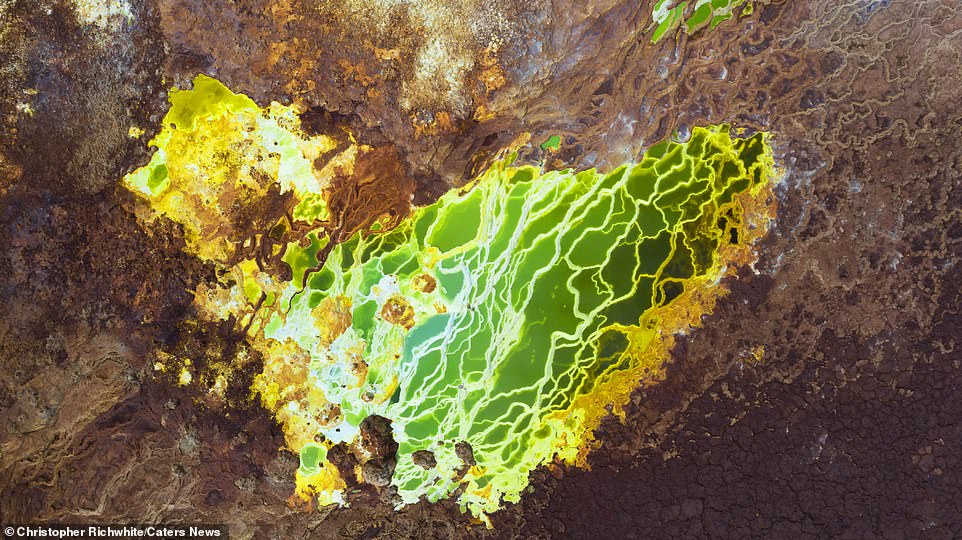 The volcanic landscape’s green and yellow acid and sulphur lakes and pools are popular with tourists.

Becky and Topher are travelling the world to promote environmental issues and according to their website, left New Zealand 506 days ago. Their plan is to take in seven continents in three years and cover 350,000km.

So far some of the incredible sights they have seen include the Krka waterfall in Croatia and the Nubian pyramids of Sudan. They have also undertaken a National Geographic assignment about the Sukuma lion killers of Western Tanzania.

MailOnline Travel previously featured another video the intrepid pair filmed while in the Danakil Depression.

In this footage Bridget can be seen swimming in a stunning natural pool in the middle of a vast salt plain.

She added: ‘We had to have security personnel in our car as well as a guide, but they could not speak English well.’ 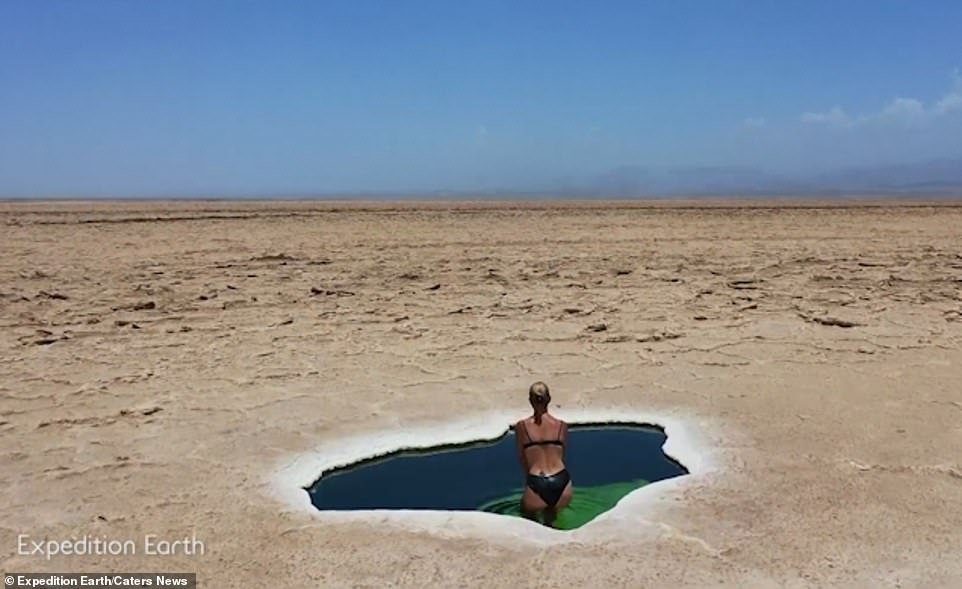 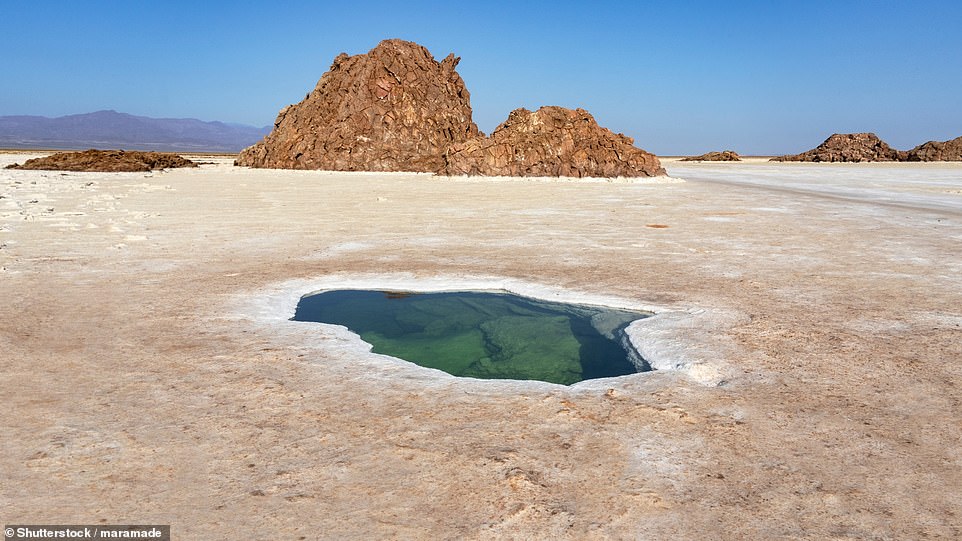