Football teams with a home stadium at a high-altitude are more likely to win against a team from sea level as ‘the players are better adapted to low oxygen levels’.

Results from more than 2,000 matches in the UEFA Champions League and Europa League between 2008 and 2016 were examined for the study by Ghent University.

The Belgian researchers found that within the matches studied, the home team won 47.1 per cent of the time compared to 28.7 per cent for the away team.

For every 320ft increase in altitude between the home and away team stadium the chance of the home side winning goes up by 1.1 percentage points.

There is 2,221ft between Real Madrid and Chelsea, so based on the study findings the Spanish side should beat the London club 7 percentage points more often.

Unfortunately the two teams have never played each other in the Champions League so we can’t see if the study findings are accurate in that case.

For every 320ft increase in altitude between the home and away team stadium the chance of the home side winning goes up by 1.1 percentage points

Travel and climate differences, whether a team or area was richer or poorer and culture had very little impact on the success rate of the home team, they found.

The study’s main finding is that when a home team receives another team from a city much closer to sea level, the home advantage clearly increases.

‘A possible explanation for this may be that the available oxygen decreases with increasing altitude,’ said co-author Nils Van Damme.

‘Home team players are likely to be more adapted to performing well in the condition of low oxygen levels.’ 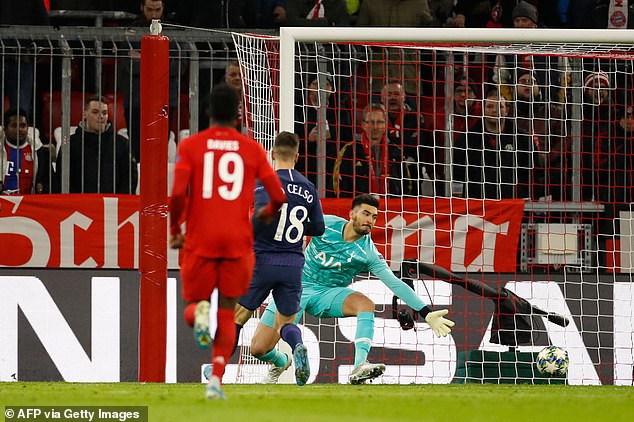 In December Bayern beatTottenham 3-1 at the Allianz Arena in Germany when they last met in the Champions League. Bayern’s stadium is 1,614ft above sea level, 1,549ft higher than Tottenham’s stadium

They examined a number of variables including the final score, distance between teams, distance above sea level, difference in temperature and in average rainfall.

They also looked at the difference in GDP between the two competing teams, number of spectators and match record based on UEFA data.

The track record of a team – whether it was an obviously better quality side – also made a difference, but not as much s the altitude of the home stadium.

In total 125 matches are played in each season of the Champions League and 205 in the Europa League, meaning they studied 2025 matches in the time frame.

They excluded 13 games from the analysis as they were played on a neutral pitch without home advantage. 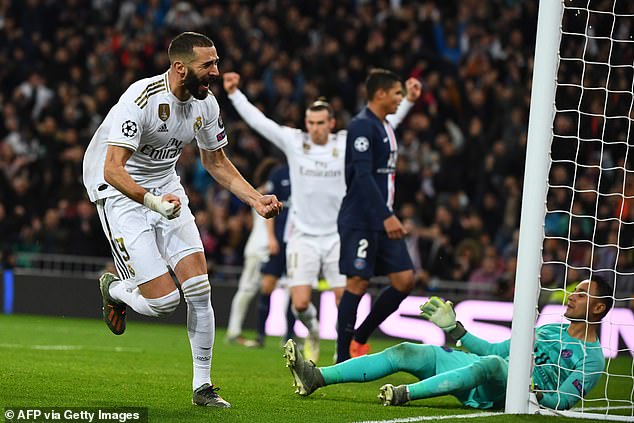 An example of the authors predictions not working was the 2-2 draw between PSG and Real Madrid. Real Madrid’s stadium is more than 2.100ft higher than the French side’s Parc des Princes so based on the study Real Madrid should have won by at least one goal

They found that a home game alone increases the chance of winning by 18.3 percentage points over playing away.

For every 3,200ft increase in altitude between the home team and away team stadium, they found the home team would score an extra half a goal.

The largest altitude difference between the 16 clubs still in the Champions League this season is 2,221ft – between Real Madrid (2,257ft) and Chelsea (36ft).

However, the two sides have never played one another in the Champions League so we can’t say whether the study findings work in that instance.

An example of a home advantage playing out as predicted was the victory of Bayern over Tottenham when they last met in the Champions League in December 2019.

Bayern’s stadium is 1,614ft above sea level, 1,549ft higher than Tottenham’s stadium. In December the German side beat the English team 3-1 in Germany.

However it doesn’t always work as predicted by the study authors.

The last time Real Madrid played PSG in the Champions League it was a 2-2 draw but Real Madrid’s stadium is more than 2.100ft higher than the French side’s Parc des Princes.

Based on the study findings Real Madrid should have won by at least one goal.

Study authors say the football market is the perfect laboratory when it comes to testing labour market dynamics.

‘There is a lot of data on this market and because productivity (scoring goals and winning matches) is observed more clearly than elsewhere,’ said Stijn Baert.

‘When a football player from Africa and Europe is equally productive, do they get the same salary? Do automatisms work or does more variety in one’s tasks yield a higher productivity?

‘These are questions that, at first sight, are only relevant within the football world, but answering them can lead to insights into discrimination and work organisation that are relevant for the entire labour market.’