Man buns, Becks, a little prince… and the hunky German who scored for me! Football widow RACHEL JOHNSON gives her view from the sofa of England’s triumph over Germany

By Rachel Johnson for the Daily Mail

Football is a simple game. My menfolk are football crazy — my youngest son’s job is a football reporter — and for that reason, they don’t usually allow me to watch matches with them as I ‘don’t understand it and my questions are too irritating’.

But as it was the first chance England had to settle the score with Germany for 25 years; and as last night’s clash was a station of the cross for Gareth Southgate on his long road to salvation after that penalty miss in 1996, they very generously made an exception for Eng v Ger 2021.

So they allowed me to put on my Three Lions shirt, assemble snacks they ordered in advance (Chilli Heatwave Doritos and Doom Bars) and join them in their technical area — ie the sofa in the telly room.

There they sat shouting at the screen, ignoring the presence of Prince George and his mum and dad, Becks and Ed Sheeran, and intently watched 22 men chase a ball on the green, green grass of home.

As I knew England would play in white and the match was on the Hallowed Turf of Wembley, I didn’t have to ask as I usually do which team were playing in what colour or whether it was home or away, which was a start.

Football widow Rachel Johnson gives her view from sofa of England’s triump (pictured: Supporters react to the EURO 2020 round of 16 game between England and Germany)

And even I, a mere woman, knew that it was the biggest match for our national side since . . . that one.

But for the first 75 minutes, all the chaps watching at home did was cry foul at our team and its manager (Bring on Grealish! Don’t pass it back! DON’T PASS IT BACK!!) while I checked out the players’ hair as I always do, as I like to see who has a man-bun, or those nasty shaved sides, and hair-bands.

After an hour-and-a-quarter of the kickaround I couldn’t resist venturing an opinion, especially as my husband had earlier feasted his gaze on the scenic panorama of Rhinemaidens in their black, red and yellow T-shirts, and commented: ‘Well, even if we win on goals, the Germans have already won on girls.’

‘Mm, who’s that dark one?’ I asked, as a tall and handsome German player in black loomed at goalie Jordan Pickford. 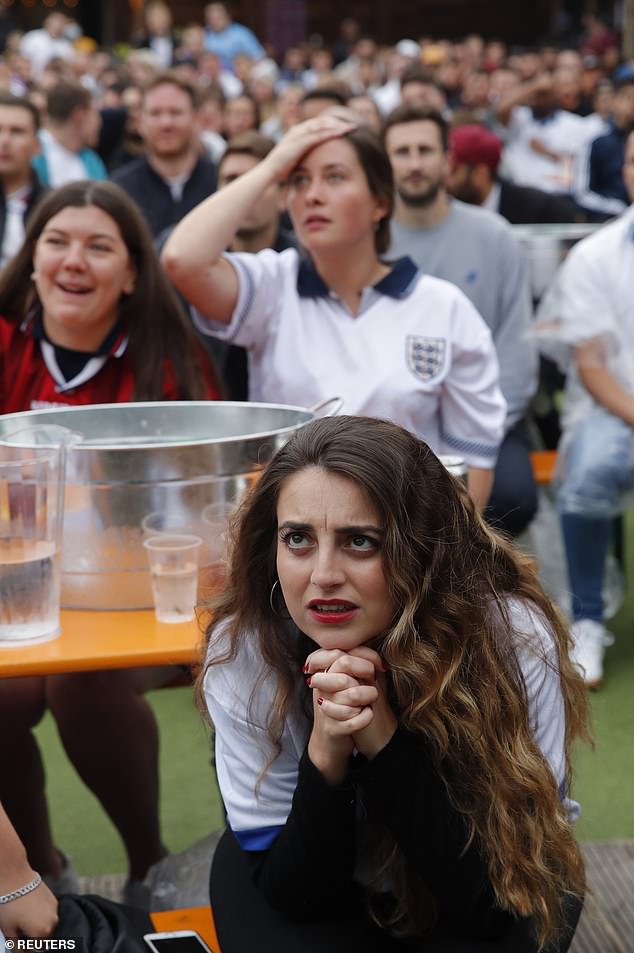 When Raheem scored in the 75th minute our telly room erupted as the red-and-white crowds at Wembley boiled over — and all was forgiven (pictured: Fans gather for the match in London)

‘Muller,’ chorused two sons and a husband. ‘Well, he can drop into my box any time,’ I sniggered.

When Raheem scored in the 75th minute our telly room erupted as the red-and-white crowds at Wembley boiled over — and all was forgiven.

We could be heroes — but would it be just for one day?

It wasn’t until the 86th minute that I think any of us took our first proper breath, and could dare to hope that the beautiful game was coming home.

‘Don’t forget added time,’ said my husband, who is very much a glass always half-empty football fan. ‘It’s not over till it’s over.’ 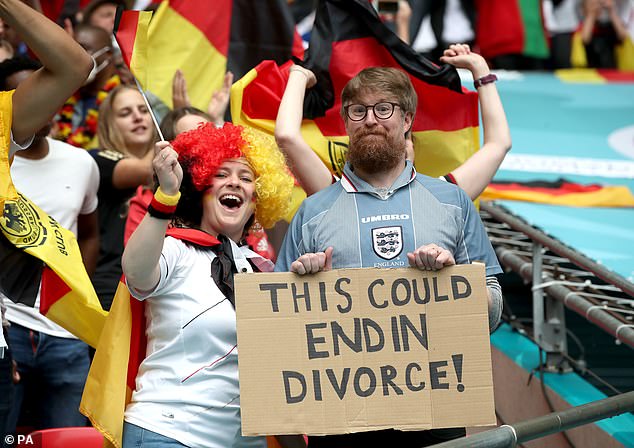 Playing at Wembley, it was the first chance England had to settle the score with Germany for 25 years and triumphed 2-0 with goals from Raheem Sterling and Harry Kane (pictured: German and England fans in the stands prior to the match)

I could hardly bear to watch. When the final whistle blew even I — who had asked why a man was lying down under the wall during the free kick (‘He’s called a draught excluder, Mum,’ said one son wearily) — could see how huge this was.

This win had achieved two enormous results for our team and country.

The first was that it had laid all our demons — and especially Gareth Southgate’s — finally to rest about that last German knockout game. (Does that mean we can rejoin the EU now? Joke. JOKE!)

Two, it lit the agonising flame of hope in most English hearts that we could go some if not all the way to the final.

Yes. Only a man could say that football is a simple game.

But only a fool would now say that at the end the Germans always win.