Footballer, 21, stepped in front of train and was killed 12 hours after ending relationship

A young footballer died under the wheels of an express train just 12 hours after he broke off his romance with his girlfriend over texts he found on her phone.

Jacob Standbridge, 21, stepped in front of the high speed passenger locomotive after he texted his mother saying: ‘I love you mum so much. Thank you for everything you have done for me. I’m so sorry’.

Jacob – known as Jake – suffered multiple injuries in the 6.30am impact on October 13 last year at Sandbach railway station in Cheshire and died at the scene.

He had split up with Ciera Barnes the previous evening after he became upset about texts he found on her phone but a coroner ruled it was not clear whether he intended to take his own life.

Jacob Standbridge, 21, known as Jake, had been planning to propose to girlfriend Ciera Barnes, but the pair broke up after he found texts on her phone and he died the next day

An inquest heard Jacob, a sports teacher, from Sandbach had played in midfield for the Stoke City Academy and other clubs then after studying a BTECH in sports management was offered a job providing sports training programs for local schools.

He had intended to propose to Ciera during a trip to New York and the pair bought a house together. But an inquest heard their relationship became troubled after he began taking steroid injections then coming off them.

His mother Karen told the Warrington hearing: ‘Sometime in January 2016 Jacob met Ciera, although he had had lots of casual girlfriends she was his first love and became part of the family.

‘But it seemed to be in the last seven to eight weeks of his life that things with Ciera became rocky, and this coincided with the period he started to use steroid injections.

‘He felt she had changed and didn’t love him anymore. He once broke down in front of me and told me that he loved Ciera but she was messing with his head. I reassured him that ups and downs were part of a relationship.

‘When he talked about his relationship with Ciera at times I felt that he was building it up in his mind. What hurt him most was disloyalty. He was very loyal to friends, family and girlfriends and I think that is the thing he valued above everything else really. 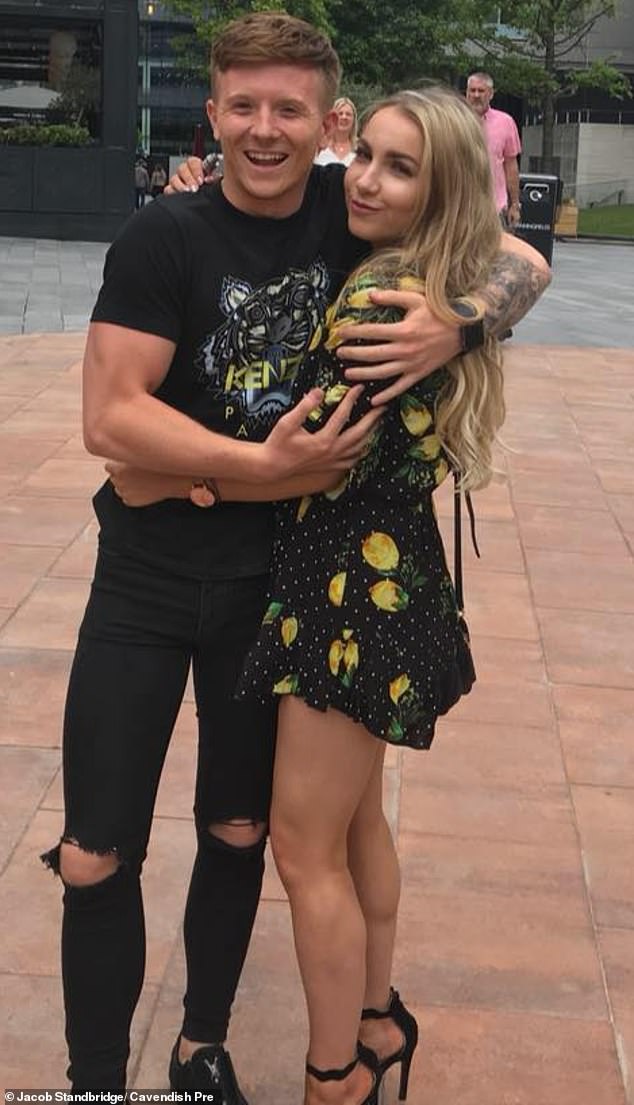 Jake’s mother Karen told the inquest: ‘He once broke down in front of me and told me that he loved Ciera but she was messing with his head’

‘There was an incident at the end of August when they were going on holiday, he found texts and at that stage they very nearly didn’t go on holiday but they worked through it with support from myself and his father Brian. It was very up and down but we did see a deterioration in the last four to six weeks in terms of the relationship.

‘On the weekend of Jacob’s death Jacob had asked if himself, Ciera and the dog could stay over on Saturday and Sunday as they were both not in work on Monday and I told him this was fine.

‘On 12th October I was at home cleaning when he unexpectedly let himself into the house. He had a late breakfast with me and we chatted about the weekend, plans for his birthday, Christmas and New Year.

‘Everything about Jacob appeared to be normal at that time but at 7pm on the evening of Friday 12th October we got a phone call saying he was coming home and it was over between him and Ciera. He said he had found more texts on her phone and he arrived at our house at 8pm.

‘He seemed quiet but he had ended a long term relationship. I said that I didn’t think they were as bad as he thought but Jake told us that he had changed his status to single on Facebook and had transferred half the savings. He said he didn’t want to leave her with nothing. He said he didn’t want to take the sofa and leave her with an empty flat.

The coroner recorded an open verdict over Jake’s death

‘I advised him to sleep on it and he may feel better in the morning but he was determined this time him and Ciera were over.

‘At about 5:30am on the Saturday morning I heard someone down stairs, and I saw Jacob was reversing off the drive in his car. We thought he was going to make things up with Ciera but at around 6:30am I received a text that said “I love you mum so much thank you for everything you have done for me, I’m so sorry”. I immediately felt something was wrong.

‘I was texting Jacob to beg him to come home and not to do anything silly, that we loved him and would fix whatever was wrong. We were all ringing him constantly and he wasn’t picking up we rang Ciera and his close friend to try and track him down. That text was the last time I heard from him.

‘I did remember saying to him, “these really aren’t that bad” but it was almost like he was talking to a colleague – I think it was the betrayal in his mind.

‘I think looking back on some of the events and putting things together there is definitely a deterioration that coincided with the time that he stopped taking the steroids.

‘The other thing was that Ciera and himself had broken up many times before I had seen him absolutely in bits, upset in my arms, and he had never taken that action. I just didn’t feel that that alone would have caused him to take the action that he did.’

Mrs Stanbridge added: ‘Jacob was always on the go and was very popular with the kids and the head teachers, a number of schools refused to have anybody else. He was extremely ambitious and driven but also loving and extremely proud of what he achieved. He was well respected by the staff, governors and parents. He told me on the Friday he had a meeting with Premier Sports who were offering a free franchise. 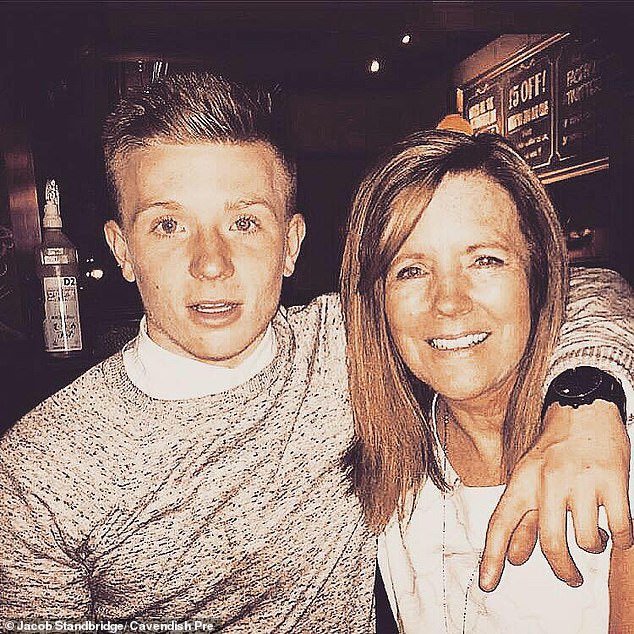 Jake with his mother Karen. She said during previous relationship ups and downs he had been ‘absolutely in bits’ but had never reacted so strongly before

‘He applied for the apprentice and made it through to the final selection. He did compare himself to how others were doing on social media and this was an added pressure but I feel at that what happened was totally out of character for Jacob. At the time of his death he wasn’t in his right mind for whatever reason and I feel that he wanted to be out of pain in that moment – I firmly believe that.

‘When he left the house he was dressed in shorts and a hoodie and he hated the cold and I believe he was going back to Ciera to sort things out.’

Ciera told the hearing: ‘He took the steroids between July and the August but his reaction to situations or arguments that maybe weren’t a huge thing would be escalated – maybe in terms of it being blown out of proportion or overthinking of a scenario. Jacob told me he was going to withdraw and go to the doctors he told us all that he went to the doctors, it was only after his death that we found out he didn’t go.’

Recording an open verdict assistant coroner Heath Westerman said: ‘The messages could indicate an intention to end his life but I cannot conclude that they do so to the required standard of probability. The messages could be interpreted as general messages as thank you for helping me.

‘The messages didn’t indicate a conscious decision to end his own life or explicitly say that was his intention to do so.

‘He was normally a resilient, strong lad who coped well with the blows of life. He had everything to live for, the love of his family and friends, a bright and successful future beckoned for him.

‘There are strong reasons why I couldn’t find the necessary intentions to take his own life.’