Footballers are five times more likely to develop the disease that killed Professor Stephen Hawking, a study has shown.

They could also develop the disease – amyotrophic lateral sclerosis (ALS) – 21 years earlier than the general population.

Head injuries and repetitive impact have been found to be a risk factor for ALS, which has no cure, and many other brain diseases.

ALS, which effects the muscles used for walking and talking, has a life expectancy of about three to 10 years, but physicist Hawking lived with the disease for more than five decades.

The cause of ALS is not known, but scientific studies suggests that both genetics and environment play a role in the development.

Study author Ettore Beghi from the Mario Negri Institute for Pharmacological Research in Milan, Italy, said: ‘It is important to note that repeated traumatic events, heavy physical exercise and substance use could also be factors in the increased ALS risk among soccer players. In addition, genetics may play a role.’

The research, which will be presented at the findings at the 71st Annual Meeting in Philadelphia, reviewed soccer trading cards of around 25,000 male professional soccer players who played in Italy from 1959 to 2000.

Researchers recorded the birth date and place of birth for each player as well as soccer position and their playing history with the team, before using news reports to determine which players developed ALS. 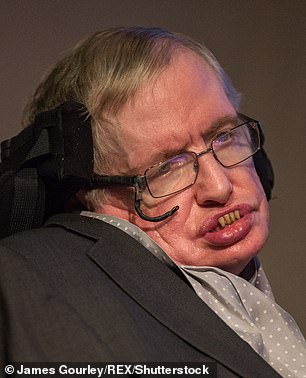 Researchers found 33 soccer players developed ALS, or an average of 3.2 cases per 100,000 people every year.

Researchers found 33 soccer players developed ALS, or an average of 3.2 cases per 100,000 people every year.

The rate of ALS in the general population, calculated from an Italian population registry, would have resulted in an average of 1.7 cases per 100,000 people every year, making soccer players almost twice as likely to develop ASL.

When looking just at soccer players age 45 and younger, the rate of developing ALS was 4.7 times higher than for people in the general population.

The average age of developing ALS among soccer players was 43 years compared to 63 years for the general population.

Mr Benghi said: ‘There have been several deaths among Italian professional soccer players from ALS, and previous ALS research has found repeated head injuries may be a risk factor for the disease.’

WHAT IS ASL, THE DISEASE THAT KILLED PROFESSOR STEPHEN HAWKING?

The British physicist, who died on March 14, 2018 age 76, was confined to a wheelchair from his early 20s due to an early onset slow-progressing form of motor neurone disease – amyotrophic lateral sclerosis (ALS).

He lost his capacity to speak in 1985, but a voice synthesizer allowed him to continue communicating, and he wrote 15 books and starred in the Simpsons and Star Trek.

He was the second very high profile ALS sufferer after Lou Gehrig, the baseball player who catapulted the disease into the public eye.

Hawking was something of a medical marvel because he lived with the disease for a lot longer than expected.

Treatment aims to make the person feel comfortable and have the best quality of life possible.

Since researchers studied only professional players, the results cannot be applied to those who play soccer at lower levels of play.

Heading is common practice in football, but more concerns are being raised about minor head impacts, which don’t necessarily cause concussion, in sport.

It has been a subject of contention for years as more and more studies have suggested repeated impacts can damage the white matter in the brain, which can affect memory and thinking skills, and can lead to brain damage and even Alzheimer’s disease and Parkinson’s in later life.

CTE is one that seems to be particularly associated with blows to the head and doctors said 59-year-old Mr Astle had the brain of a 90-year-old after his career.

NFL player Aaron Hernandez also had CTE, which has early symptoms of aggression, suicidal thoughts and mood swings, in the most severe forms ever detected for someone his age.

The former New England Patriots star was serving a life sentence for murder when he killed himself in April at the age of 27.

A landmark report by the Centers for Disease Control and Prevention in 2012 said NFL players were four times more likely to die from ALS than the rest of the US population.

In light of emerging evidence, campaigners and groups such as The Football Association and Dr Bennet Omalu, who discovered CTE, have urged for the ban of younger football players doing headers in training and matches.

All sports insist they are doing more to prevent concussions in athletes to protect their brain health, but research by Boston University said it is not a ‘big hit’ that is the problem.

It is the experience of repeated subconcussive hits over time that increases the likelihood of brain disease, they said, after publishing a groundbreaking study in January 2018.