The FTSE 100 chemicals group said it would scrap years of research and development because it was too far behind foreign competitors in China and Korea who are already making batteries on a huge scale.

The decision puts a question mark over 400 high-skilled jobs – most of which are in County Durham and Oxfordshire.

Fresh start: Johnson Matthey said it would lose its chief executive of eight years, Robert MacLeod (pictured), and warned profits this year would be lower than some City estimates

Johnson Matthey’s U-turn came as the company also said it would lose its chief executive of eight years, Robert MacLeod, and warned profits this year would be lower than some City estimates.

The toxic cocktail of bad news sent Johnson Matthey shares into a tailspin.

The news came at an awkward time for Boris Johnson, alerting the world to one of Britain’s biggest companies admitting defeat in a key area of the race to go green as the Cop26 climate summit entered its final stages.

Johnson Matthey makes most of its money from producing catalytic converters to filter exhaust emissions from petrol and diesel cars.

Around one in three cars on the road worldwide are thought to have one of the company’s converters attached.

But looming bans on sales of traditional cars mean Johnson Matthey has been looking for new places to gain a foothold.

It began its work on batteries in 2012 and had developed a technology called enhanced lithium nickel oxide, which enables electric cars to run for much longer than they can. 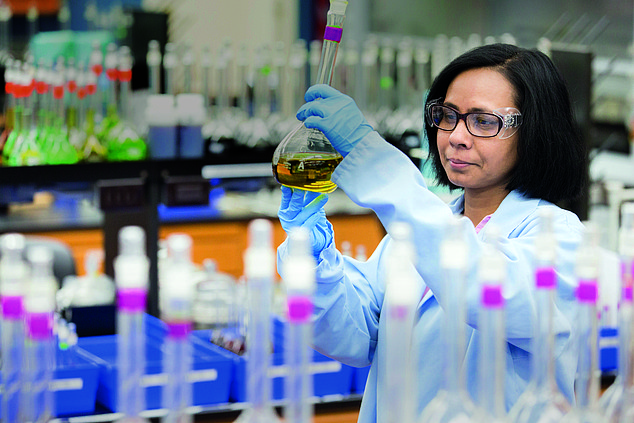 Change of tack: Johnson Matthey, which traces its origins back 200 years to the industrial revolution, will now focus more on its work on hydrogen

Johnson Matthey, which traces its origins back 200 years to the industrial revolution, will now focus more on its work on hydrogen – which is expected to become another major growth area in the coming years.

Car industry expert and Birmingham Business School academic David Bailey said: ‘Battery production is all about scale and getting costs down – and Johnson Matthey wasn’t able to do that.

‘They’ve been at it a long time and thought they had a unique technology they could charge a premium for – that was the wrong bet and cost them dearly.’

The announcement was a shock for the City after Johnson Matthey earlier this year earmarked £600m to invest in battery and hydrogen technologies, which many saw as a vote of confidence in the business.

And six months ago MacLeod announced a decision to expand the electric battery division with a large facility in Finland. There are fears that Johnson Matthey’s experience is a sign of more shocks to come for the UK industry.

Bailey said: ‘Johnson Matthey’s announcement is a blow for the UK automotive industry.

‘The UK is lagging badly behind in terms of putting in place the electric battery production infrastructure needed to really be a serious competitor.’

Nissan and its partner Envision recently unveiled plans to expand its giant battery-making ‘gigafactory’ in Sunderland as electric car demand has soared. Plans by another group, Britishvolt, to build a factory in the UK is still in the early stages.

MacLeod, 57, will step down in February after almost eight years in the job. He will be succeeded by the head of Bayer’s crop science unit, Liam Condon.

MacLeod has staked much of his and the company’s reputation on its electric battery tech.

He said that while its products were a success, the group had concluded ‘we will not achieve the return necessary to justify further investment’.