Unrepentant footy star Tyrone May has again attracted unwanted attention for the Penrith Panthers – this time for using a racist slur.

The 25-year-old was enjoying his team’s NRL premiership celebrations this week when appeared on Instagram Live with teammate Viliame Kikau and made the offensive comment.

May is then believed to have hijacked the fan interaction and muttered the string of obscenities and the racial slur. 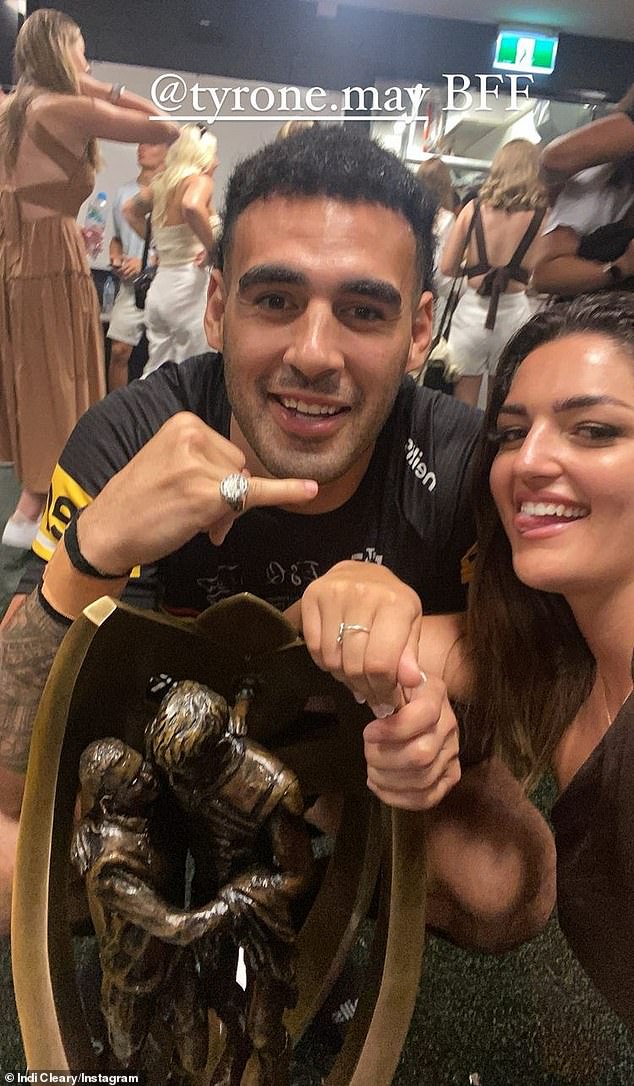 Tyrone May (left) also sent the rumour mill into overdrive this week amid claims he is dating Indi Cleary (pictured), the daughter of Penrith coach Ivan Cleary 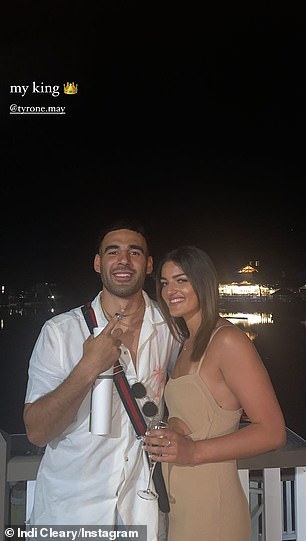 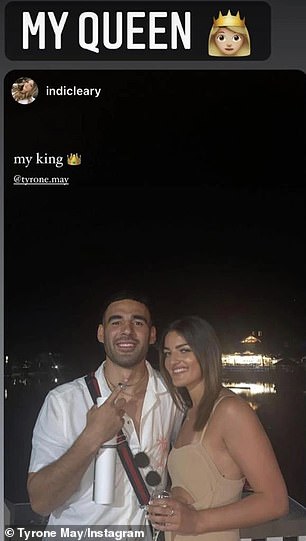 A Panthers official has hosed down the dating rumour, declaring the pair are ‘good friends’

The scandal comes after a tumultuous week for the footy player who sent the rumour mill into overdrive with another social media post.

The post with Indi Cleary, the daughter of his coach Ivan Cleary and younger sister of teammate Nathan, sparked rumours the pair have been dating.

‘My King,’ she captioned the picture.

The premiership winner reposted the picture of himself and Indi, 22, whom he declared ‘My Queen’.

Last Sunday, Indi shared another photo posing with May and the Provan-Summon trophy in the Panthers dressing room following the NRL grand final triumph.

‘BFF,’ she captioned the photo. Indi also shared photos celebrating with the partners of her brother’s teammates.

A Panthers official told the Daily Telegraph she and May aren’t dating and are simply ‘good friends’.

May came off the bench during the grand final win, which was the club’s third premiership since 1991.

He has a close bond with the tight-knit Cleary family, who stood by him during his legal dramas in recent years.

The Panthers utility missed the entire 2019 season after being suspended by the NRL’s controversial no-fault stand down policy while facing charges over leaking the sex tape.

May was sentenced to 300 hours of community service and placed on a three-year good behaviour bond in early 2020.

The local junior was supported in court by the Cleary’s as he pleaded guilty to four charges of disseminating images and recording images without consent. 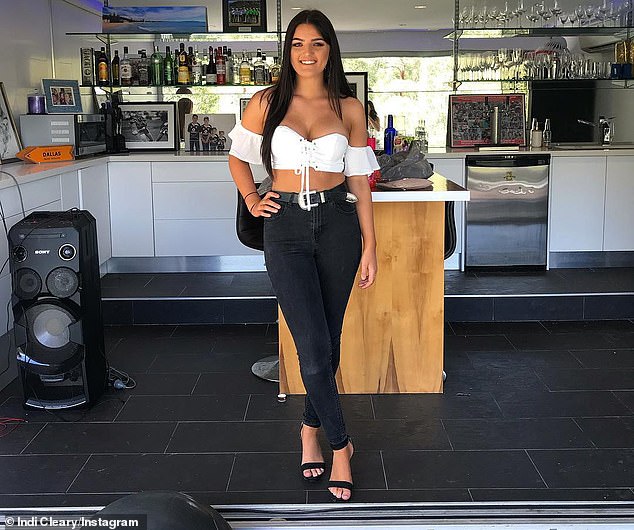 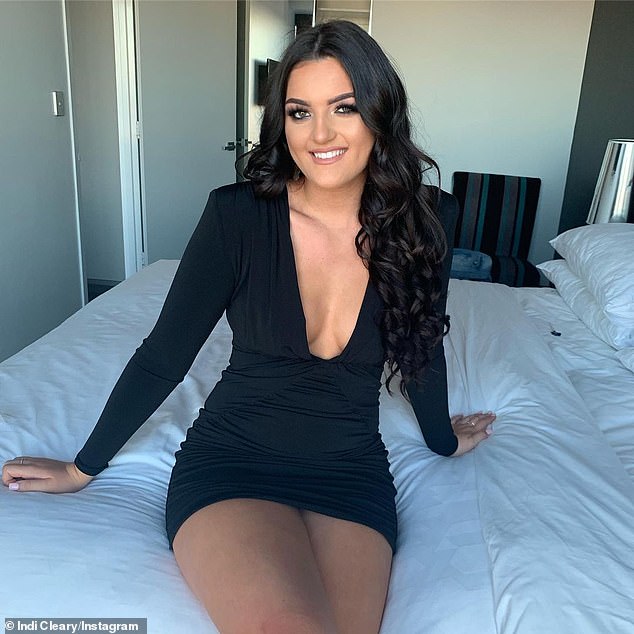 May was charged after he filmed a sexual act with a woman at Coffs Harbour, on the north coast of NSW, in February 2018.

He then filmed another sexual act with a second woman in western Sydney suburb Kingswood three months later.

Magistrate Robyn Denes described May’s filming of the sexual interaction as ‘reprehensible’ when handing down her punishment.

Earlier this week, May copped online backlash after he called out the people who ‘threw dirt’ on his name during his legal dramas.

He quoted lyrics from Drake’s song Fair Trade, referring to his court battle as he thanked the Cleary family for their support.

‘And the dirt that they threw on my name turned to soil and I grew up from it,’ he wrote. ‘Time for y’all to figure out what y’all goin’ do about it.’

May went on to caption photos celebrating with his coach and teammates after the grand final win – and also posted a photo being flanked by Ivan Cleary at court on the day of his sentencing.

Both posts were later deleted. 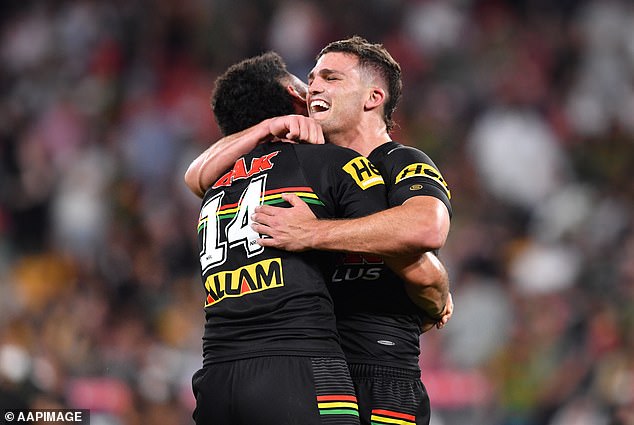 Tyrone May, pictured with Penrith Panthers halfback Nathan Cleary (right) after the grand final, has a close bond with the family of his coach and teammate 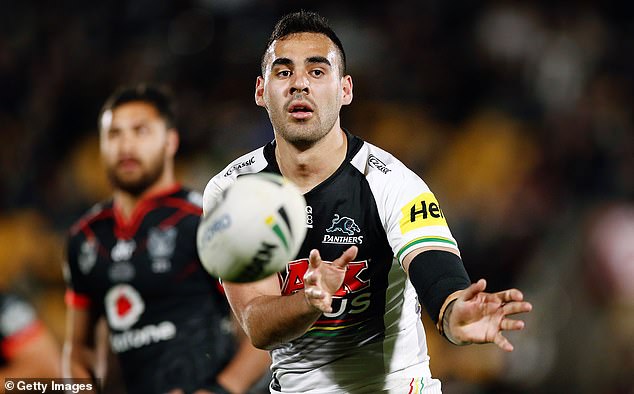