The 64-year-old – who won five premierships with Hawthorn in a stellar career that stretched from 1975 to 1991 – opened up with the news as he listed his favourite ways to spend the holiday season.

After expressing his love of going boating, bodysurfing and sunbaking on the scenic stretch of coast just south-east of Melbourne, the legend known as ‘Dipper’ was asked what his guilty pleasure is.

‘Having a Sorrento vanilla slice every day, taking my shorts off and swimming naked when I’m alone in the water,’ he told The Age. 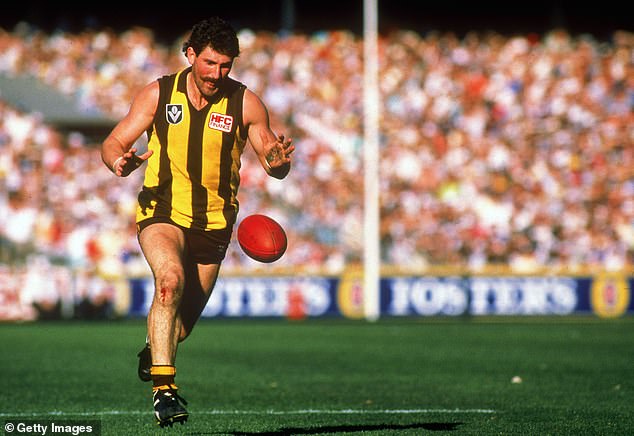 A Brownlow Medal winner with the Hawks, ‘Dipper’ (pictured playing in 1985) beat a debilitating health condition last year that he said was more painful that any of the numerous serious injuries he suffered on the field

The Brownlow Medal winner was able to fully enjoy this summer after beating a health condition that required surgery in April.

Last month DiPierdomenico revealed he suffered a bladder condition that left him urinating 30 to 40 times a day.

His problem with urinary retention got worse when he tried to tough it out and he said it was more painful that any injury he suffered during his on-field career – quite a statement considering he famously played through the 1989 grand final with broken ribs and a punctured lung.

‘The worst is when you’re walking around the chemist looking for nappies and trying to hide it,’ he told the Herald Sun.

‘Fortunately it wasn’t cancer or my actual prostate, but a lot of my mates were worried about me because of my so-called leakage. 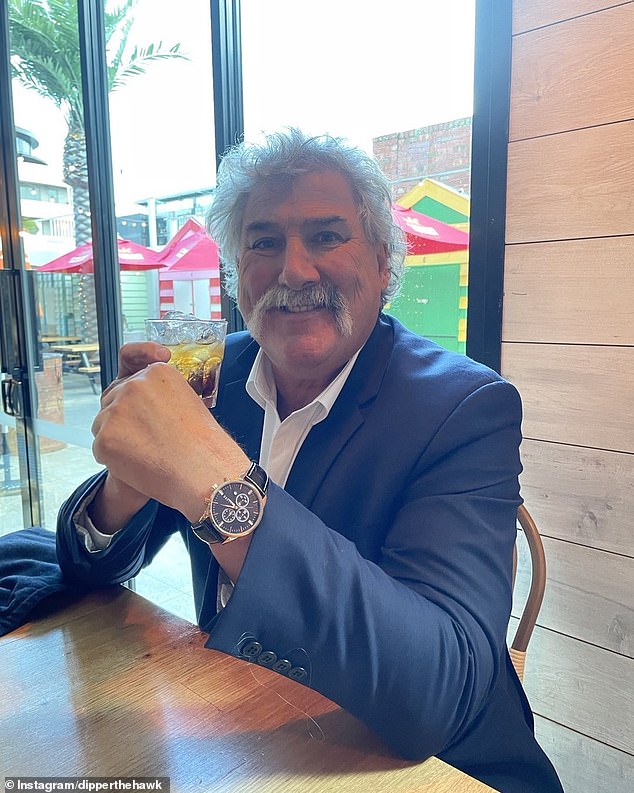 After beating urinary retention by having surgery in April, the Aussie Rules icon decided to use the experience to warn other men to get regular check-ups

‘I thought silly men like me just put up with the pain, we all think we’re invincible.

‘A punctured lung could have been my last game, but this was worse than any footy injury.

‘The pain got so bad I went to emergency, and the persistence of the doctors fixed me up quick.’

Surgery provided relief for the Hawks great, who will now use the experience to warn other men to get checked for similar problems.