Footy legend Chris Judd is considering quitting his job as a television presenter after sparking controversy with on-air comments.

Judd, who is the football director at Carlton, said on his regular spot on Channel 9’s Footy Classified last week that the Blues ‘don’t want someone with training wheels on’ to be the club’s next senior coach.

Many interpreted the comment as ruling out current caretaker coach David Teague, who has never held a senior coaching position, despite a sharp improvement in the team’s form since he took the interim job five weeks’ ago.

Judd, who is one of five people on the sub-committee to choose the next coach,  said the controversy had him questioning if being a media presenter was too much of a conflict with his club role to be sustainable.

‘I have to be careful, more precise with the words that I use to avoid these headlines in future,’ he said on the show on Monday night.

‘I’ve really got to become a more accomplished media performer or decide it’s not the right space for me to be in.’

And while he said his comments had been taken out of context, he did admit he was to blame as he had not been clear enough in explaining himself.

He said he had called Teague when the controversy erupted to clarify what he had meant.

‘I said on this show the next coach of Carlton won’t have training wheels on and they’ll have enough experience. I didn’t specify senior coaching experience for that to be the case.

‘I rang him (Teague) to clarify that I didn’t say what was said. I was frustrated with myself, because I wasn’t precise enough with my language.’

This was not Judd’s first stint as a media personality, he has previously featured on Triple M where he has spoken candidly about his club without any issues arising.

Daily Mail Australia has contacted the Blues for further comment. 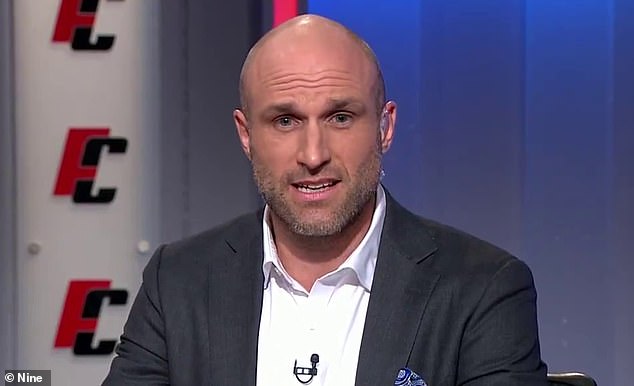 Opps: he retired Carlton champion found himself in a media storm last week after he said the Blues ‘don’t want someone with training wheels on’ to be the club’s next senior coach while appearing on Channel 9’s Footy Classified