Ford has created a prototype racing version of its Mustang Mach-E – the highly anticipated electric SUV that set to go on sale to consumers next year.

The race car – which has been named the Mustang Mach-E 1400-  boasts seven separate engines and 1,400 horsepower. It can reach speeds of 160 miles per hour.

Rushbrook revealed that the Mach-E 1400 was built as a ‘learning platform’ for Ford as it looks to create more electric cars in the coming years.

The company is investing more than $11.5 billion in designing and producing electric vehicles across the next 18 months. 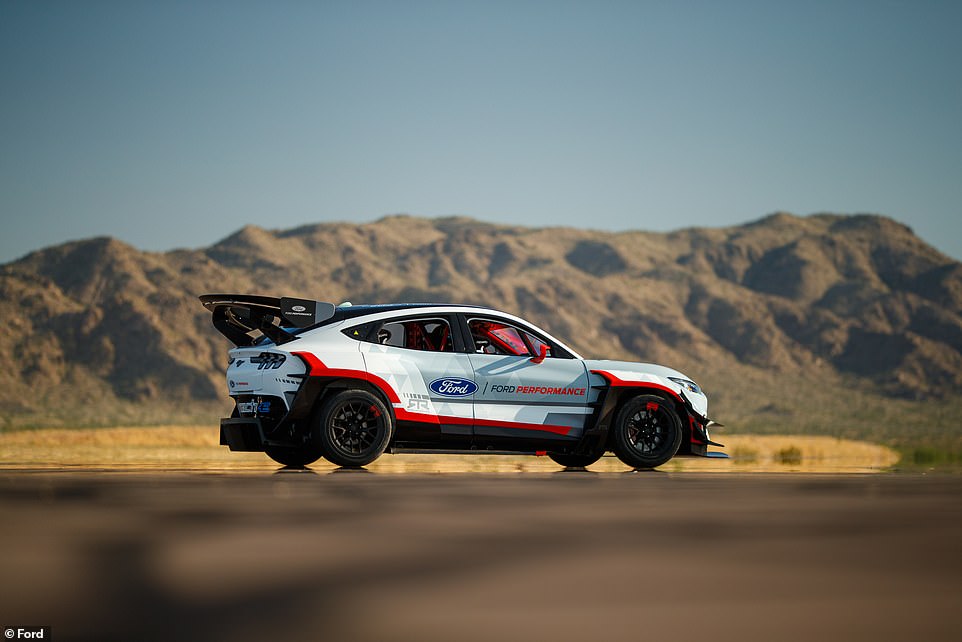 The Mach-E 1400 boasts seven separate engines and 1,400 horsepower and can reach speeds of 160 miles per hour 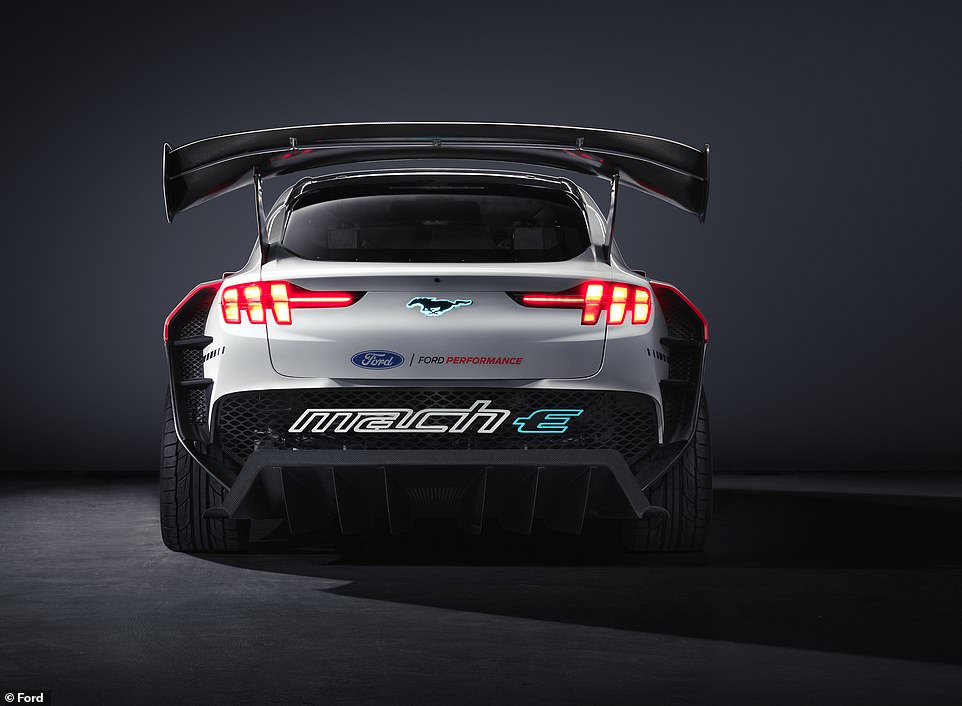 The rear of the Mach-E 1400 is pictured. The back wheels are powered by four separate engines

FEATURES OF THE PROTOTYPE MUSTANG MACH-E 1400

-Regenerative brakes to top up battery power when the vehicle slows

– Hydraulic handbrake to stop the car’s back wheels

While the Mach-E 1400 features the same body shape as the regular Mustang Mach-E SUV, most of its components are much different.

While the SUV will feature just two motors that produce 459 horsepower, the Mach-E 1400 houses a staggering seven electric motors.

Three of the motors power the race car’s front wheels, while the four others power the back wheels.

The motors will be powered by 56.8 kilowatt-hour battery pack, which is significantly smaller than the 76 kilolwatt-hour pack included in the Mach-E SUV.

This means that the batteries in the race car last little more than an hour before they need to be recharged.

However, given that the vehicle is only designed to zoom along a race track, longevity wasn’t a major issue of consideration.

The batteries are also able to be recharged to 80 percent capacity in just half an hour, giving drivers time to take a short break after revving around.

Meanwhile, the Mach-E 1400 also  includes regenerative brakes which can top up battery power as the car slows.

The prototype vehicle additionally boasts a hydraulic handbrake that is able to stop the back wheels, allowing smoke to billow from the back of the car. 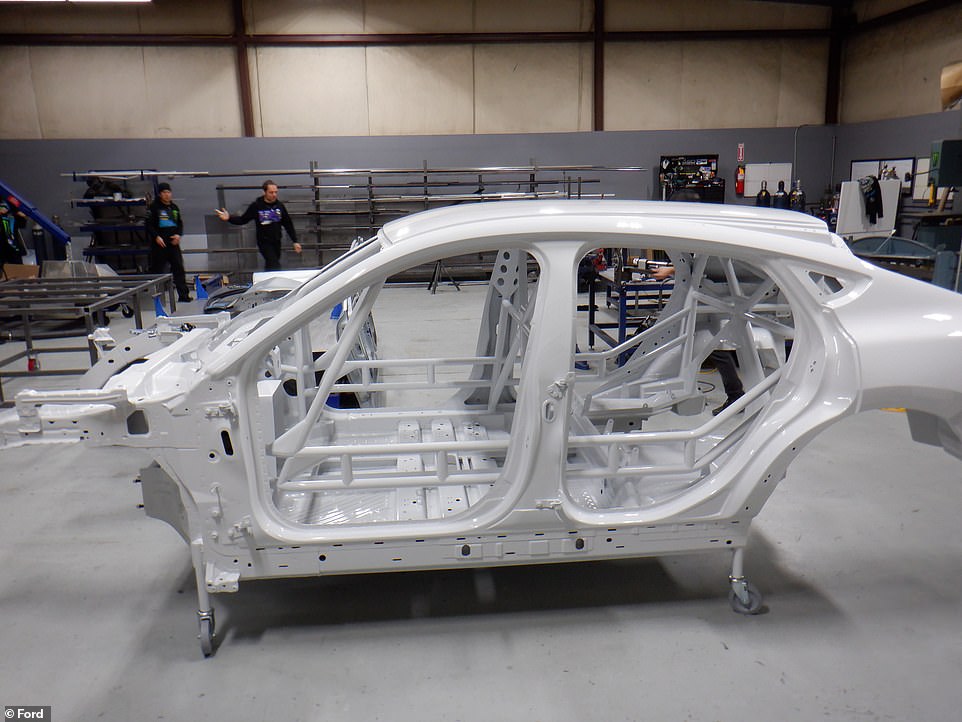 The body of the Mach-E 1400 is made almost entirely from carbon fiber. The vehicle is pictured during the production process 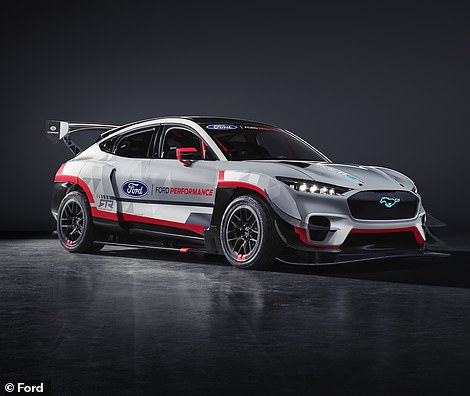 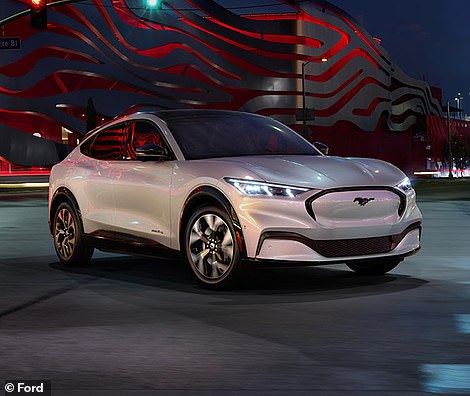 While the Mach-E 1400 (left) and the Mach-E SUV (right) look similar from the outside, they feature different components

Ford unveiled plans for its electric Mach-E SUV last November, in a bid to compete with Tesla and other European manufacturers.

The family sized SUV will have a fully-charged range of about 300 miles with an available extended-range battery.

Systems on board the Mach E will guide motorists to public charging stations, recommend where to charge on trips and includes access to more than 12,500 charging stations within the ‘FordPass’ charging network.

‘People want a car that’s thrilling to drive, that looks gorgeous and that can easily adapt to their lifestyle – and the Mustang Mach-E delivers all of this in unmatched style’.

A release date for the SUV has not yet been confirmed. 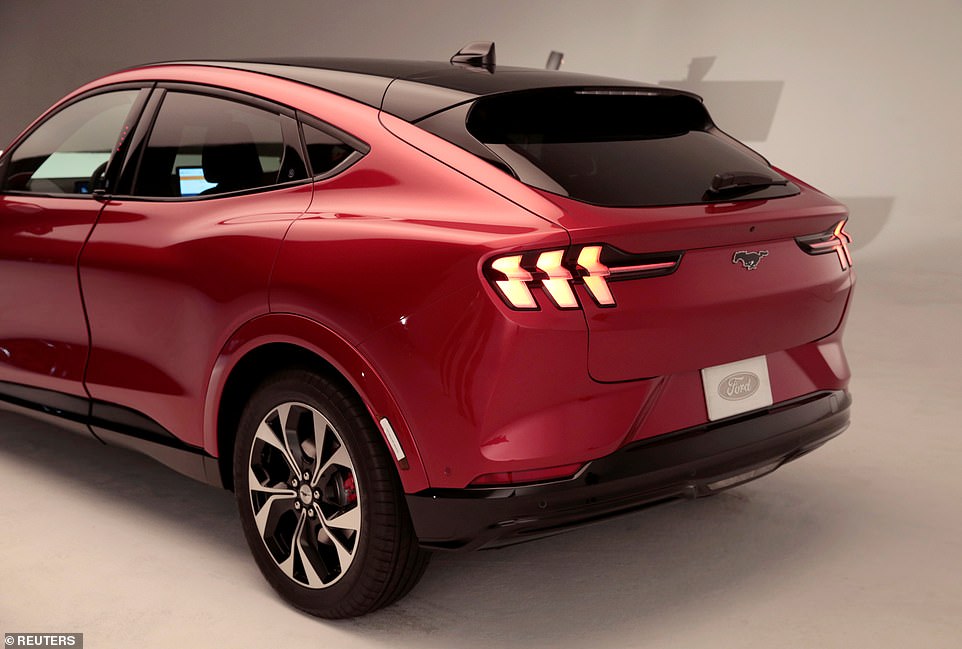 While electric cars have been introduced by several manufacturers, the vehicles haven’t really caught on with American consumers. Ford is betting the larger, SUV-version of the Mustang (pictured) will have better results 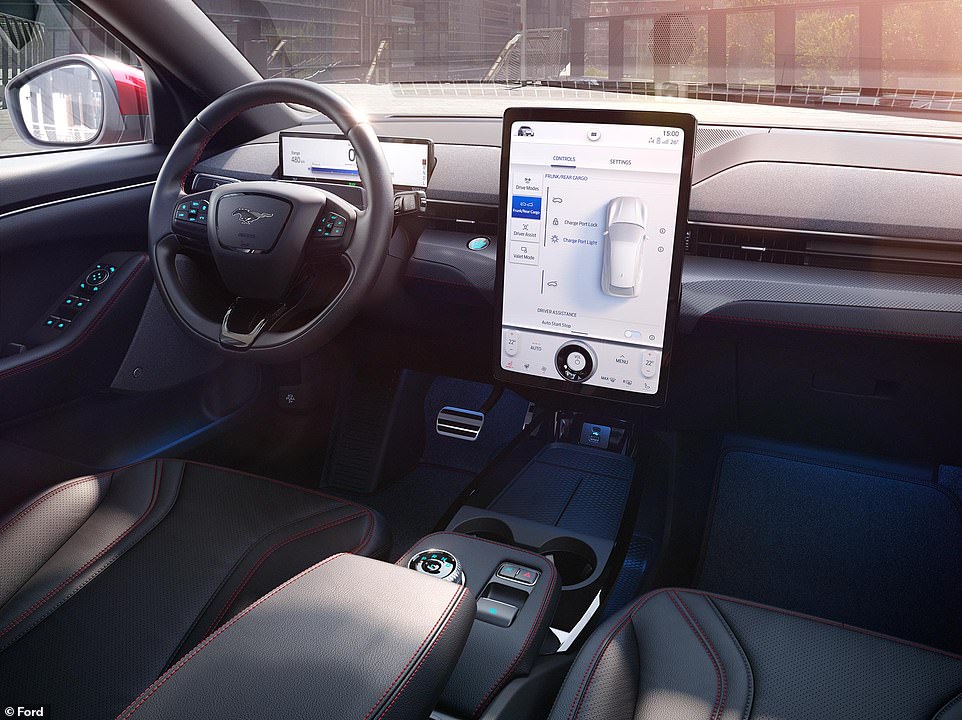 Systems (center) on board the Mach E will guide motorists to public charging stations, recommend where to charge on trips and includes access to more than 12,500 charging stations within the ‘FordPass’ charging network 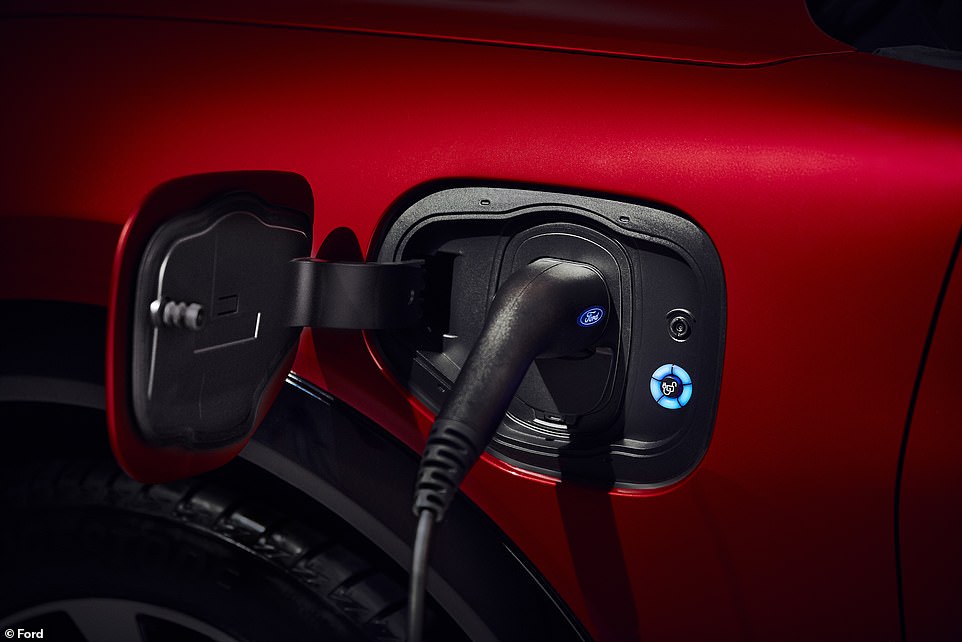 Fully-charged Mach E’s will have a range of about 300 miles with an available extended-range battery and rear-wheel drive. An all-wheel drive version is also available