Parts of Britain face up to six inches of snow over the next 24 hours after the coldest night of the winter so far saw temperatures drop to -10C (14F).

Further hazardous conditions will hit much of the UK over the next two days, with Met Office weather warnings imposed until tomorrow afternoon amid fears snow could bring rail and road closures, power cuts and injuries.

Light flurries could hit London overnight tonight, and the disruption could hit supermarket delivery drivers with both Sainsbury’s and Tesco already having to cancel shopping orders as snow settled across parts of the UK.

Forecast models had initially suggested snow could arrive in the capital tonight, although the Met Office has said exactly where it may snow and how much could settle remains very uncertain even at such a late stage.

From 6pm tonight until 11am tomorrow, much of southern England is covered by an ice warning; while from 6pm a warning for snow kicks in for the Midlands and North East England, lasting until 2pm tomorrow.

A major flooding risk also remains for nearly 150 areas of the UK, with 92 alerts and 53 warnings issued by the Environment Agency for England, as well as two alerts and two warnings by Natural Resources Wales. 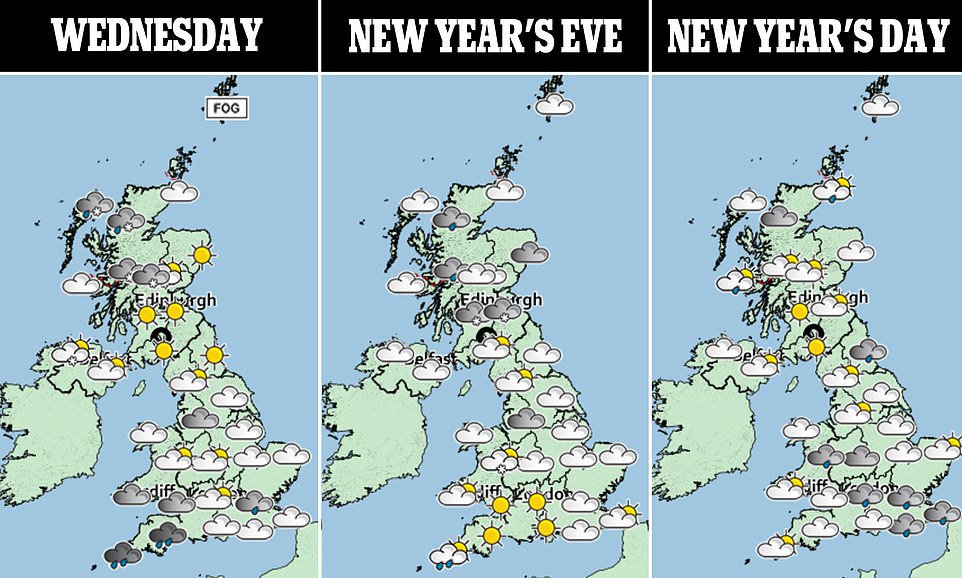 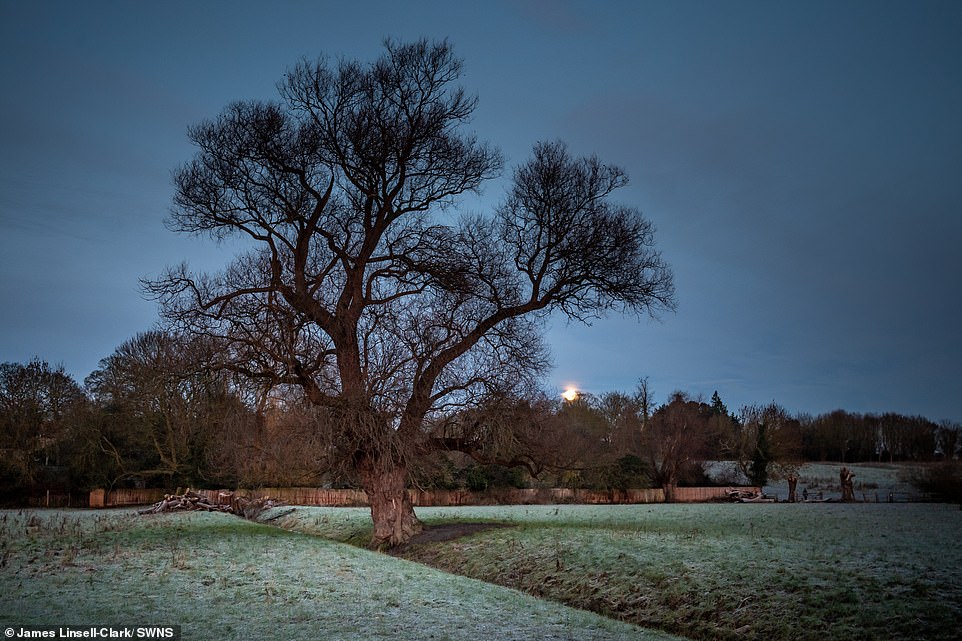 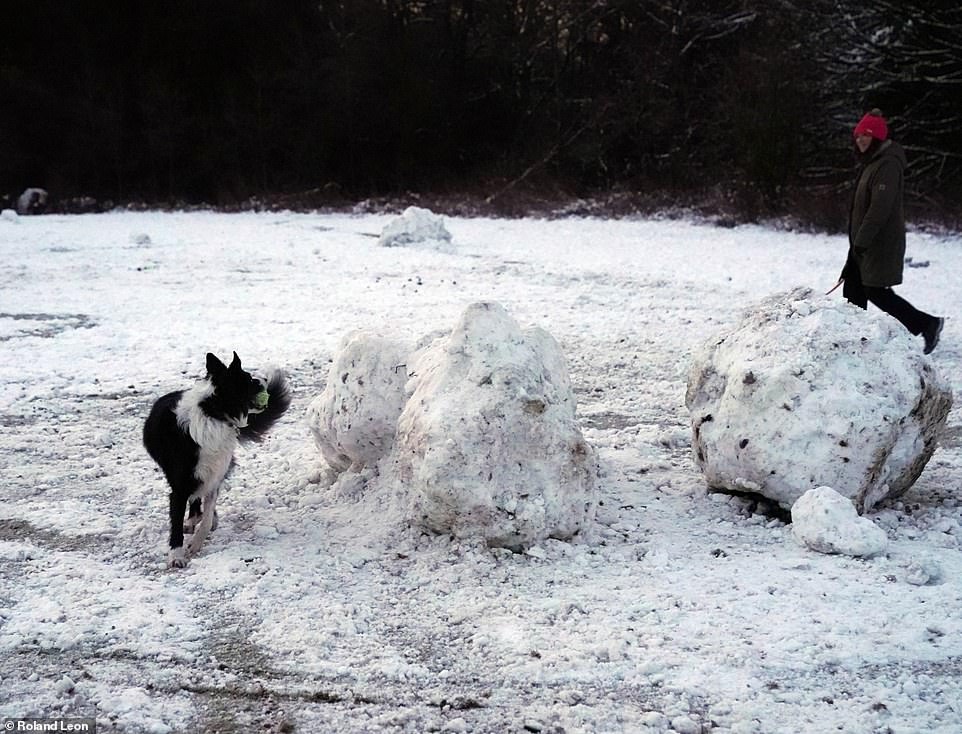 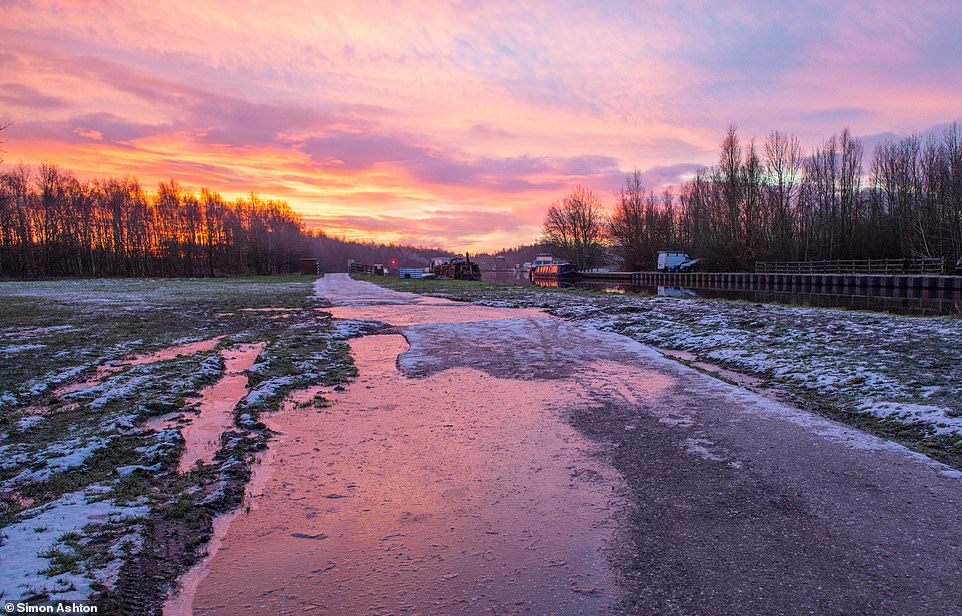 Freezing temperatures as the sun rises over the River Aire and the Lemonroyd Marina in Woodlesford, Leeds, this morning 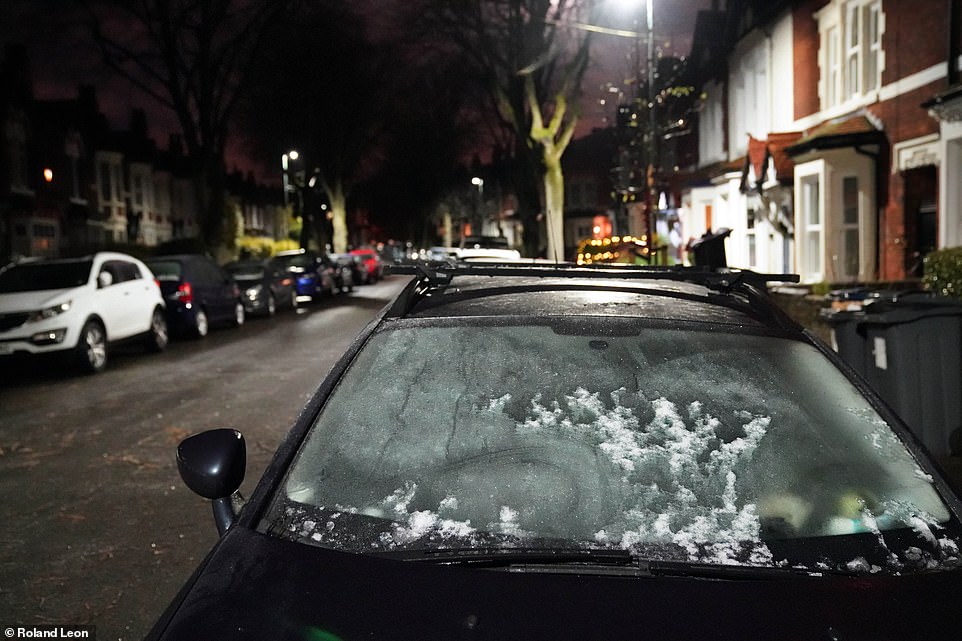 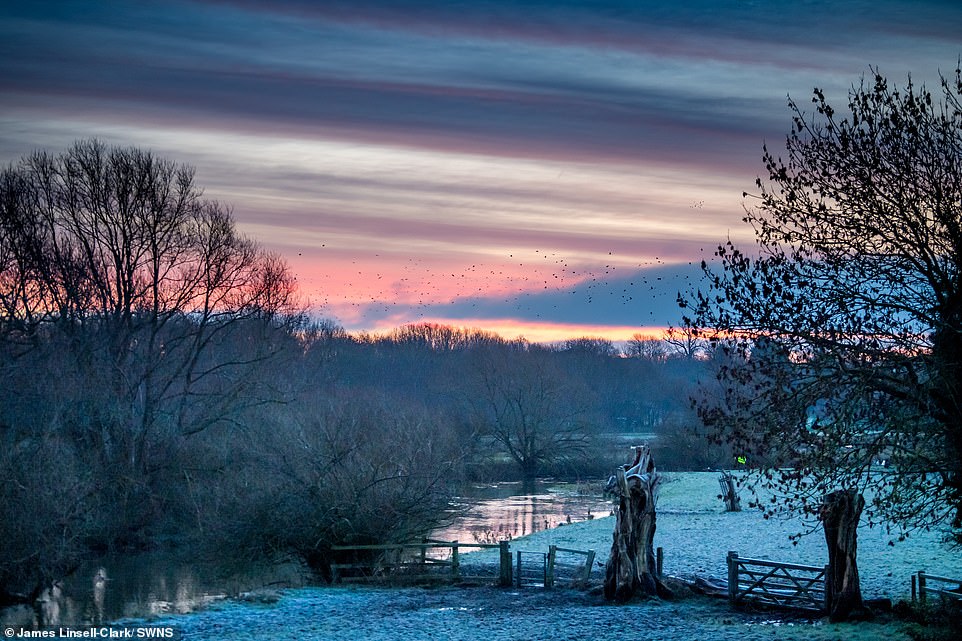 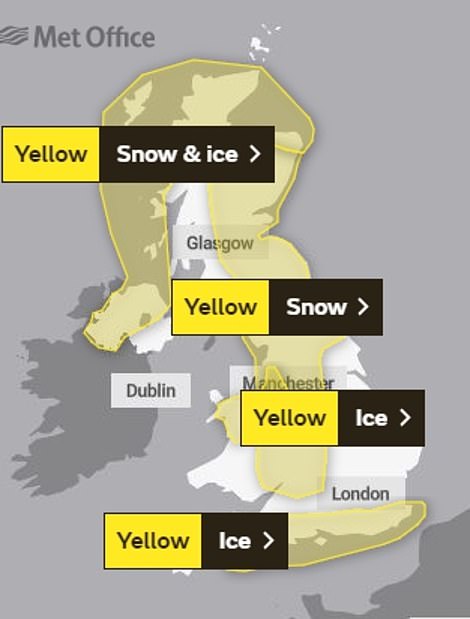 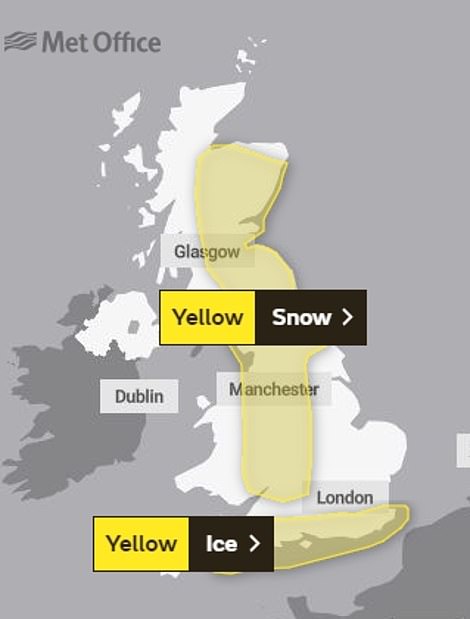 Met Office meteorologist Alex Burkill said any lying snow for the South could be ‘disruptive and impactful’, adding: ‘We could still see a few centimetres building up. These areas don’t usually see that much snow.’

The Met Office forecasts between 0.8in (2cm) and 2in (5cm) of snow could lie, with up to 6in (15cm) possible in higher areas. Coastal areas in the North will see the worst of the showers, and may also get hail and thunder.

Chief meteorologist Paul Gundersen said: ‘An Atlantic frontal system looks likely to bring a mixture of rain, sleet and snow to parts of southern England and South Wales on Wednesday.

‘But the extent of any snow is very uncertain. There is then a risk of further snow moving south across Scotland, northern England and the Midlands on Thursday.’

The AA told motorists that stopping distances can be ten times greater on icy roads, and in East Lancashire there were ‘lots of collisions coming in as the snow falls heavily’ according to Deputy Chief Constable Terry Woods. 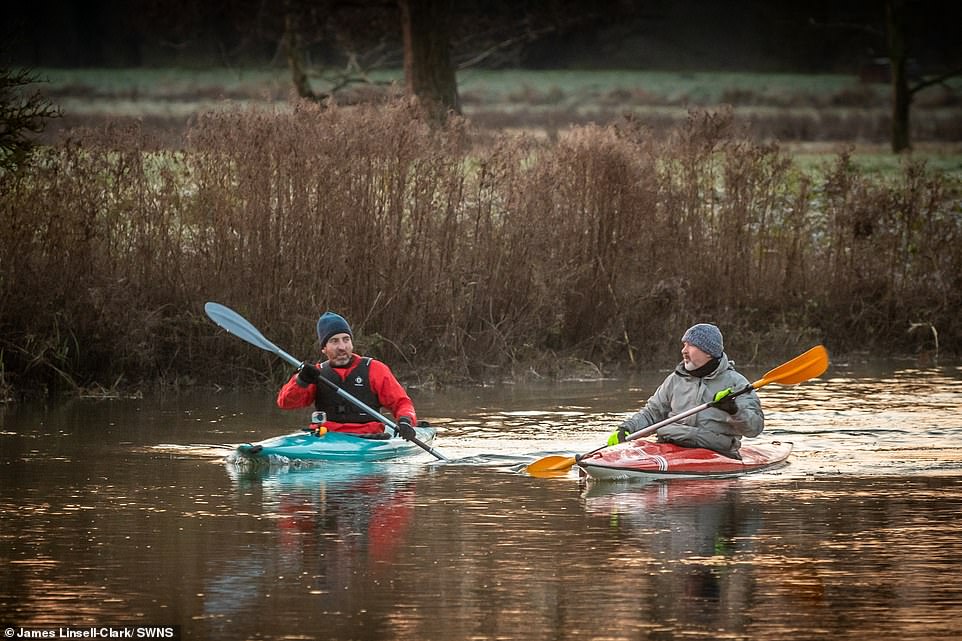 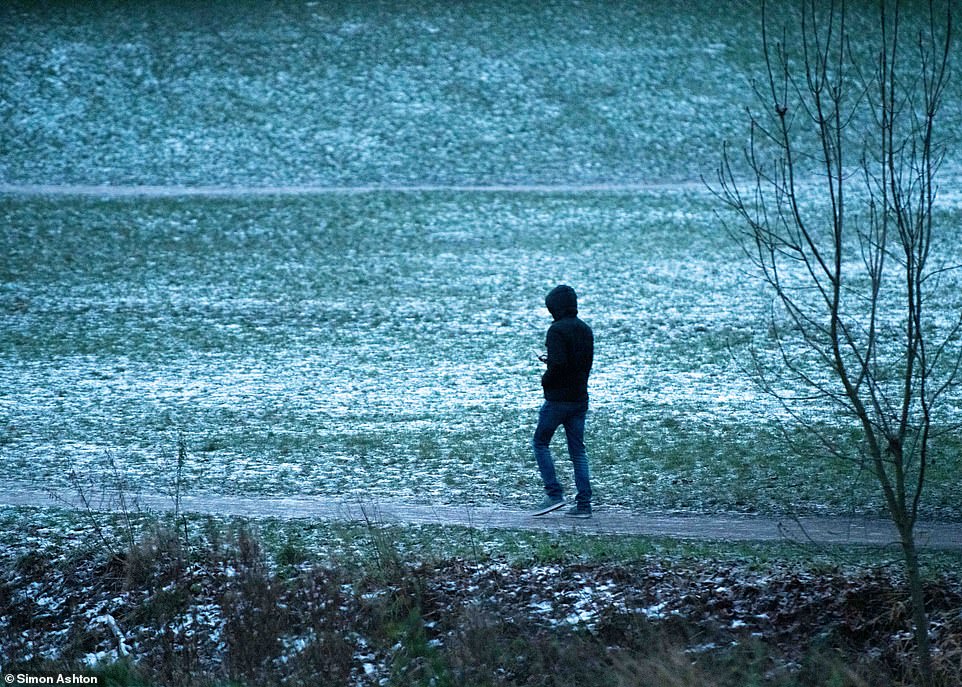 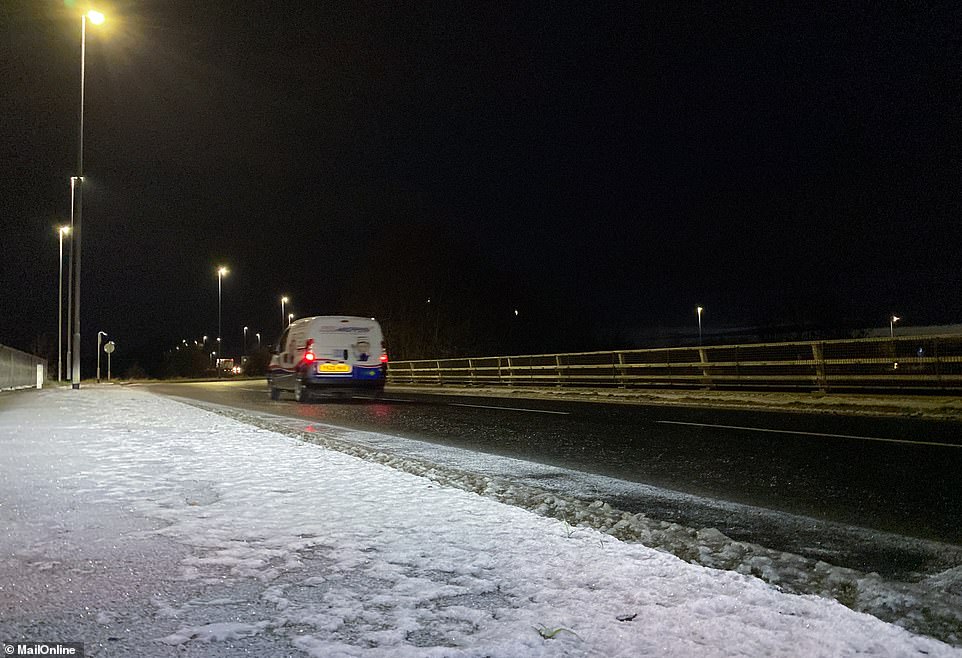 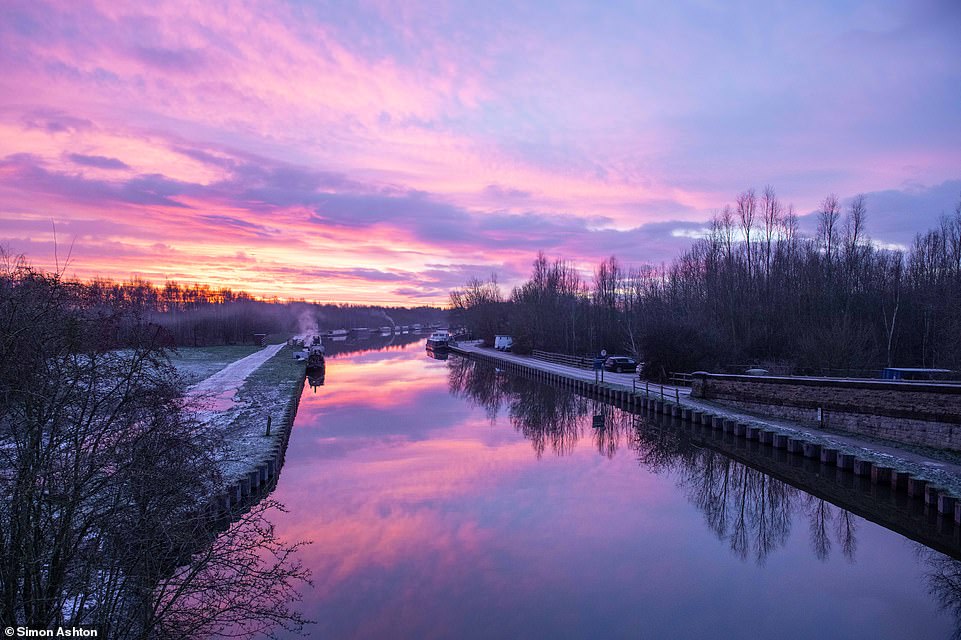 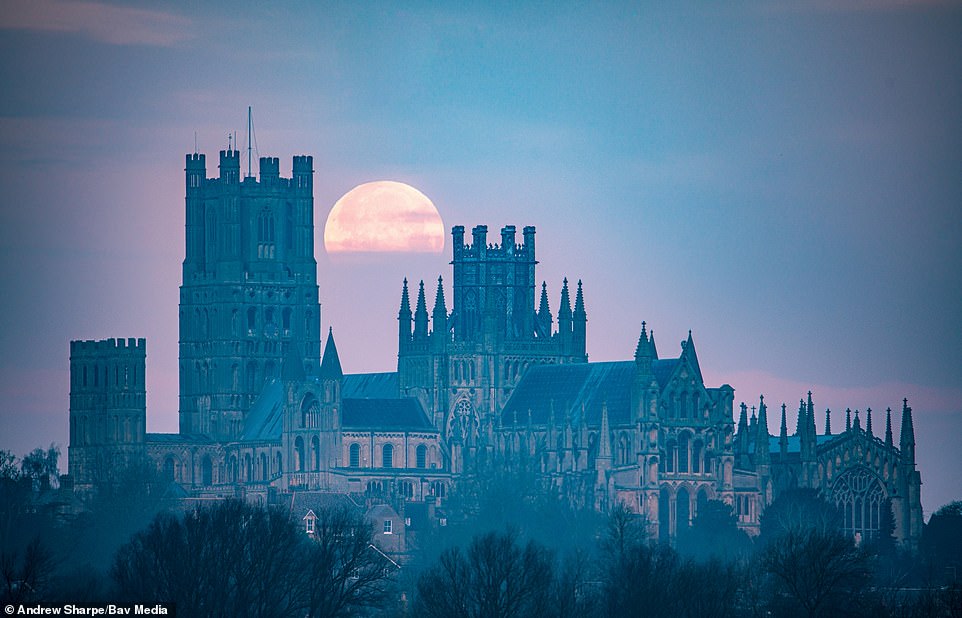 The last full moon of the year, known as the Cold Moon, sets this morning over Ely Cathedral in Cambridgeshire 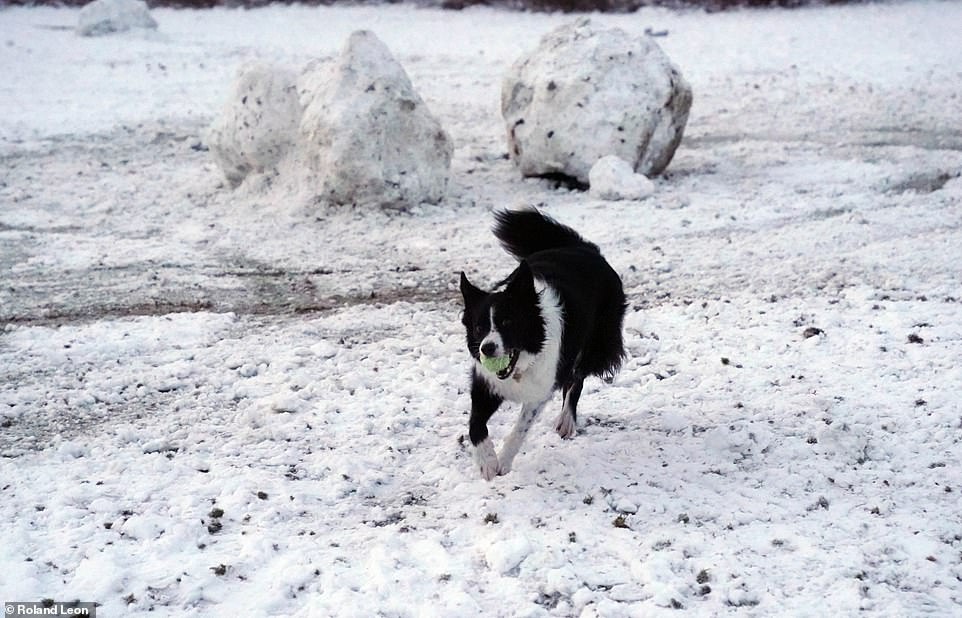 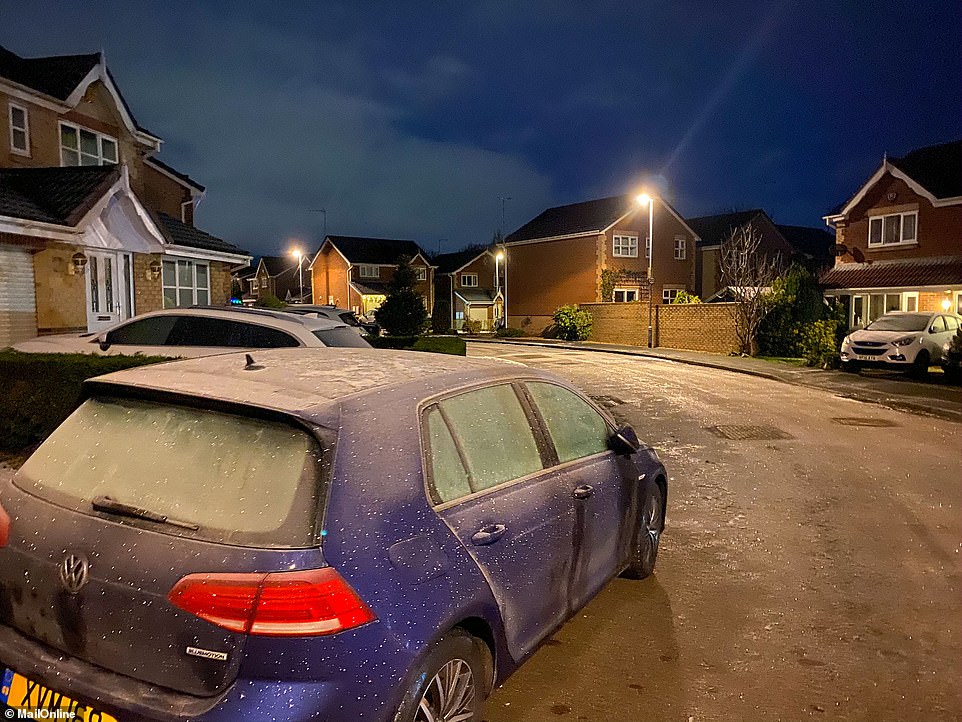 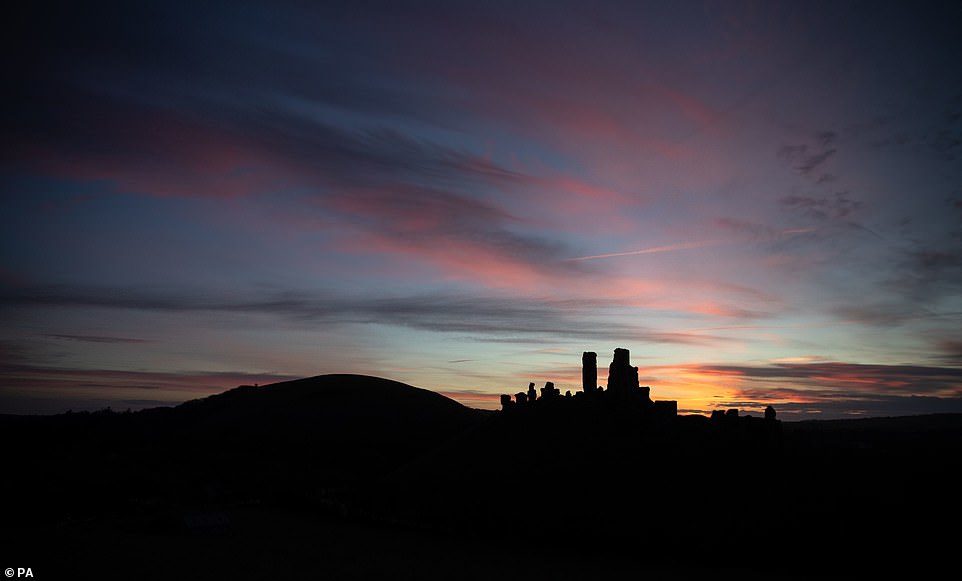 The AA’s Ben Sheridan said: ‘Before setting off, it’s important to fully de-ice the car, remove snow from the roof and ensure all the lights are working so you can see and be seen.

‘Check the conditions along your route before you go and make sure you have plenty of fuel in case of delays.

‘It’s also worth carrying winter essentials such as warm, waterproof layers, a shovel, a torch, fully charged mobile phone and a flask of hot drink.’

In the south Cotswolds, river levels started to recede after rain caused homes and roads to flood.

He said: ‘We have witnessed carers arriving to provide essential personal care to elderly and vulnerable residents and being forced to wade through sewage-contaminated floodwater.’

Snow will fall again across southern England tomorrow, with these three maps showing where and at what time 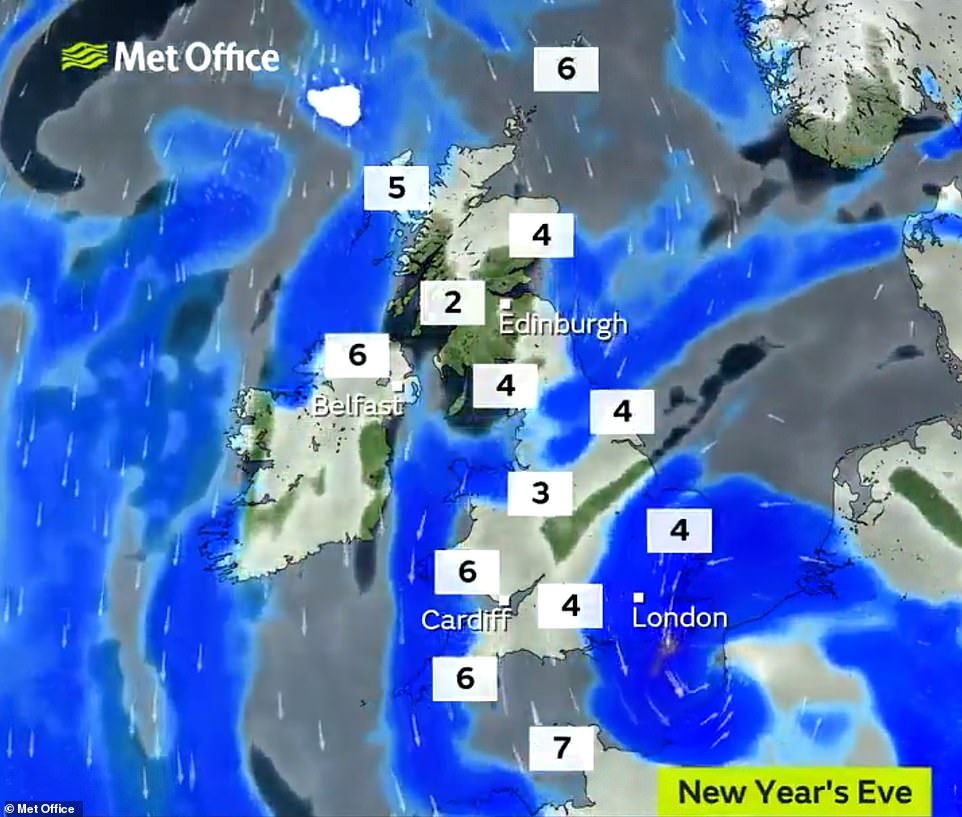 The Met Office warned that the cold, frosty weather driven by northerly winds was set to continue through what NHS chiefs hope will be a low-key ushering in of 2021 tomorrow night, with sub-zero conditions as darkness falls.

The bitterly cold conditions are forecast to continue into the new year. Met Office forecaster Clare Nasir said: ‘2021 starts how 2020 ended, on a very cold note with the risk of wintry showers and widespread frosts.’

Scotland is enveloped in an air mass direct from the Arctic, bringing a mix of snow, sleet and rain to end the year.

The Met Office said that in the second half of next month Scotland could see weather conditions similar to those which brought the ‘The Beast from the East’ storm in 2018, when much of the country ground to a halt.

Mr Burkill said: ‘These cold conditions are going to be with us for a while, at least the first couple of weeks in January and possibly longer.

‘The air is currently coming from the Arctic but we are seeing the prospect of an easterly wind developing later in January, which could result in impacts on our shores.’ 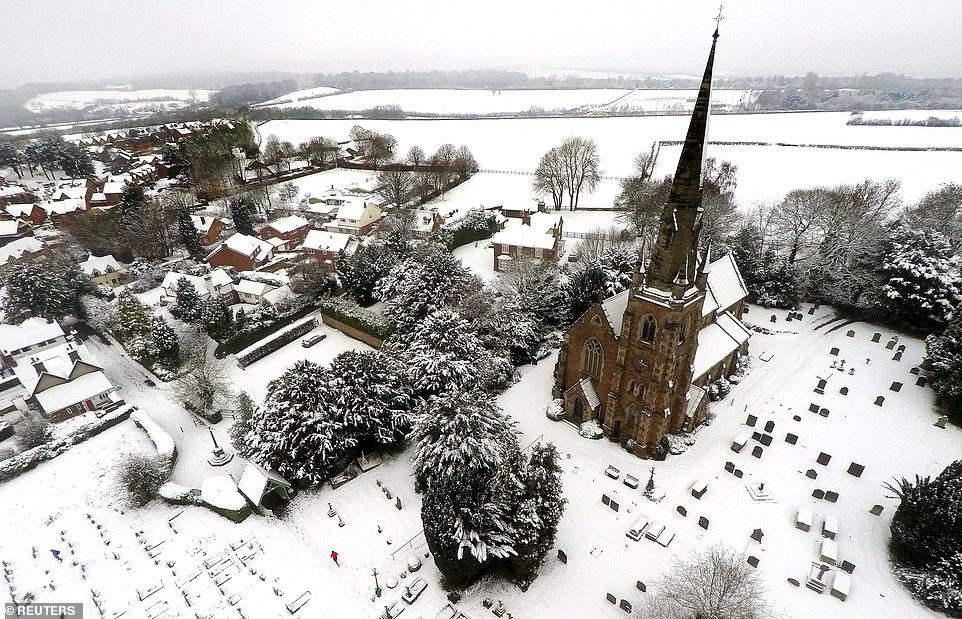 A man runs through the snow in the graveyard of the Parish Church of St John the Baptist in Keele, Staffordshire, yesterday 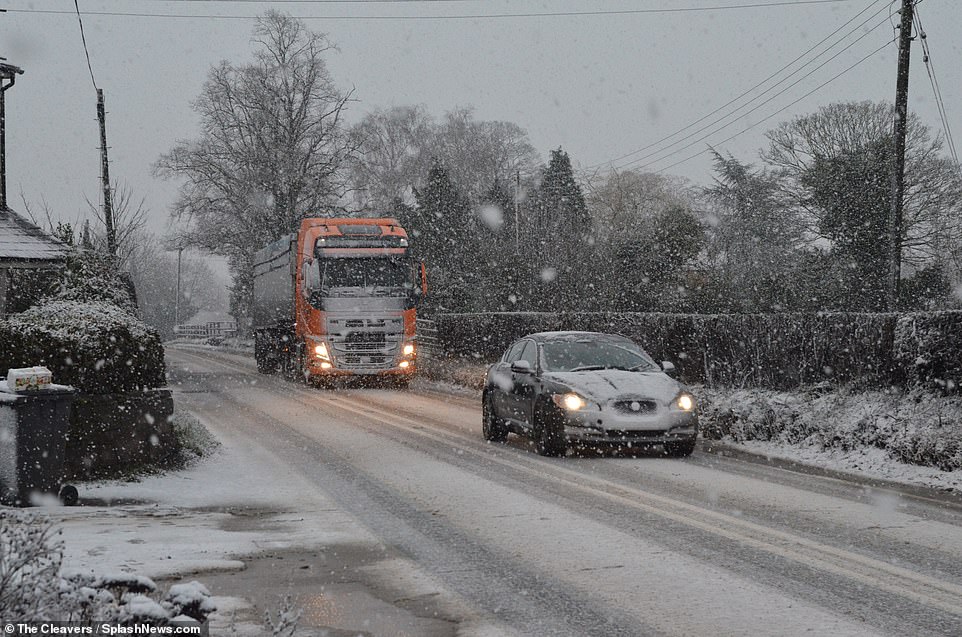 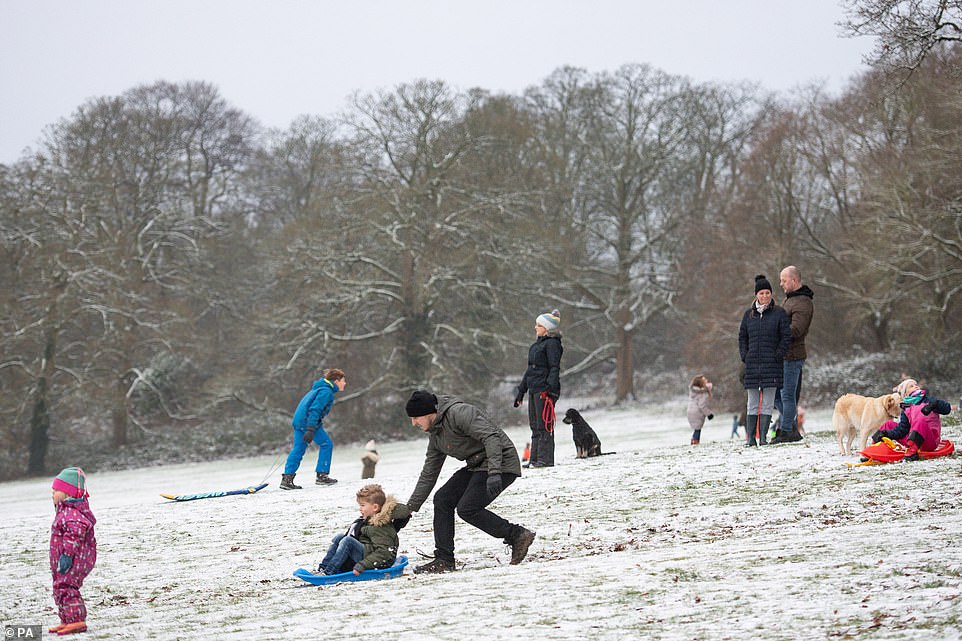 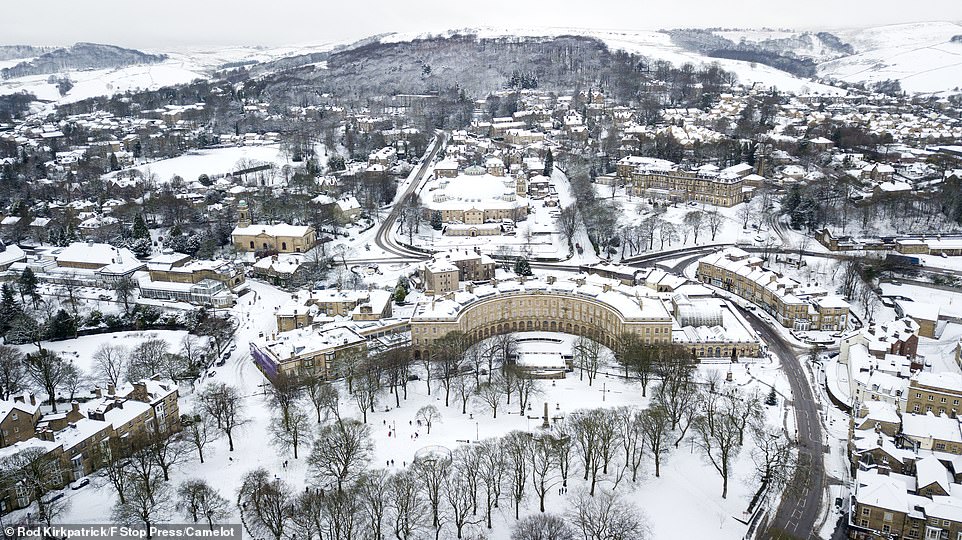 Charities said cancelled supermarket deliveries on top of worries over the pre-Christmas port closure at Dover were putting vulnerable people at risk.

Caroline Abrahams, Age UK’s charity director, urged people to check on elderly neighbours who could be cut off.

‘We tend to take easy access to food and other essentials for granted, but this Christmas a number of factors are getting in the way,’ she said.

‘Bad weather, the pandemic and disruption to supply lines from Europe are creating a perfect storm, whereby even the most organised among us can find we’re unexpectedly cut off from things we need.’

Campsie Chaos! Crowds of people cause chaos as they flocked to the hills to enjoy first proper snow of winter

Crowds of people caused chaos yesterday as they flocked to the hills to enjoy the first proper snow of winter.

Police were called out to deal with traffic after dozens of cars were parked on a country road in the Campsie Fells, Dunbartonshire, causing severe congestion over two miles.

Long lines of people could also be seen at the top of the hills, but the sheer number made social distancing on narrow paths almost impossible.

One person told the Mail: ‘There were people on the hill from around 8.30am and it got busier as the day went on. There were so many cars double-parked that it led to gridlock. It was wall to wall for a couple of miles. The car park was jammed too. It was unbelievable.’

Police called out to the Crow Road, near Lennoxtown, said no reports of breaches of coronavirus restrictions were reported. 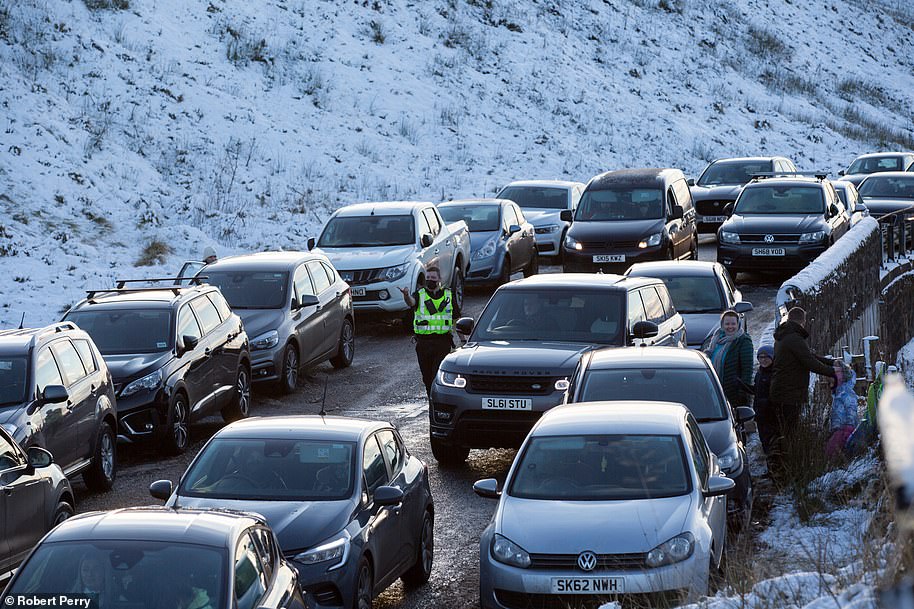 Police were called out to deal with traffic after dozens of cars were parked on a country road in the Campsie Fells, Dunbartonshire 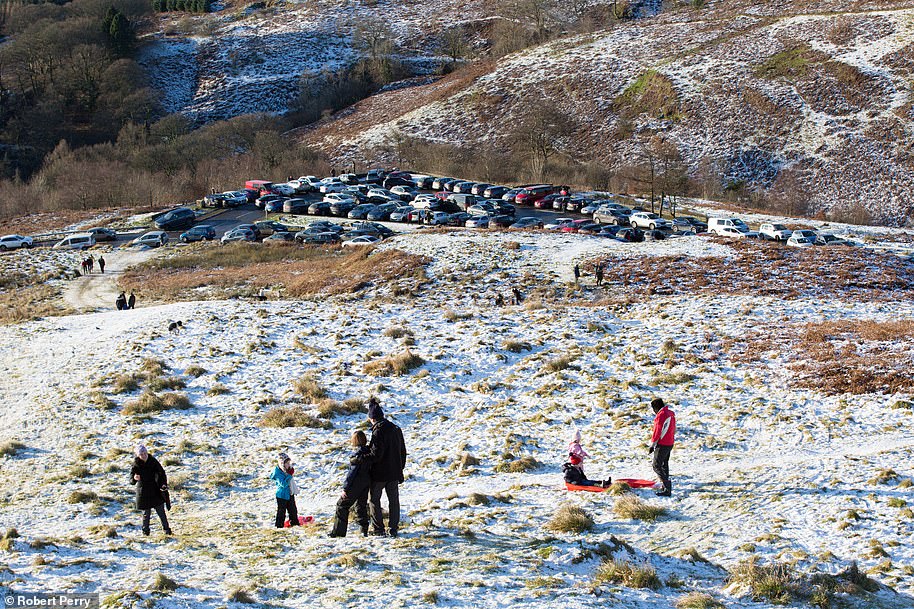 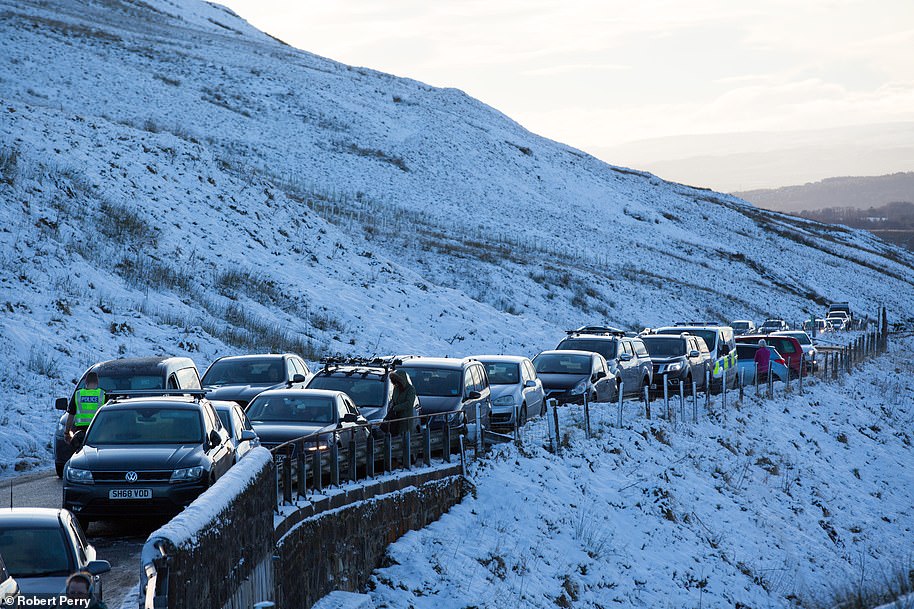 Police called out to the Crow Road, near Lennoxtown, said no reports of breaches of coronavirus restrictions were reported

** Have you taken any photographs of the snow in Britain today? Please email: pictures@mailonline.co.uk **