Experts are warning about the health risks of heatwaves as temperatures continue to climb across the country and are set to hit 90F today.

The mercury is expected to soar in the south of England before Friday, leading forecasters and medics to tell people to take extra precautions to stay safe in the sun.

Warnings have been issued about UV levels, which are going to be ‘exceptionally high’ over the next couple of days.

Met Office meteorologist Alex Burkill said that UV levels will be ‘reaching eight across many places and will be reaching nine across parts of Devon and Cornwall tomorrow. That’s about as high as it gets really in the UK.

‘The sun is as strong as it gets at the moment because we’re so close to the solstice.

Mr Burkill advised anyone outside for prolonged periods of time on Wednesday and Thursday should take measures to protect themselves.

Shoppers have also been advised to be aware they could be forced to spend extra time in the sun as a result of social distancing measures.

Dr Lynn Thomas, Medical Director at St John Ambulance explained: ‘You could end up in the sun for longer than expected on what would normally be a quick journey, such as queuing to enter the supermarket, so you should be prepared to look after yourself and others.’ 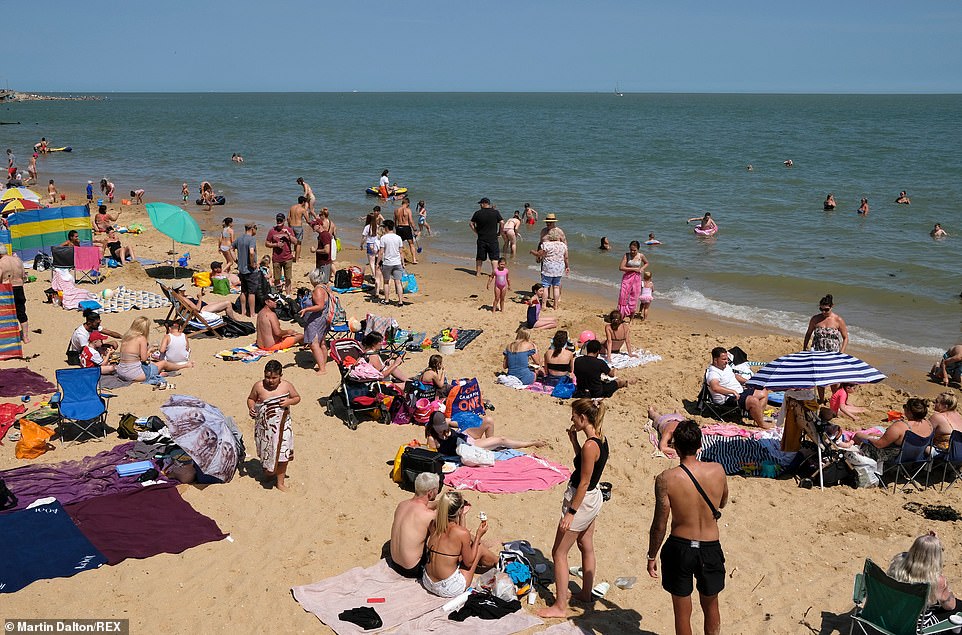 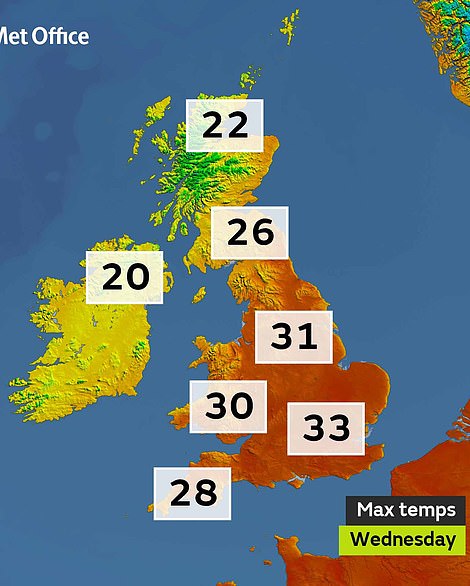 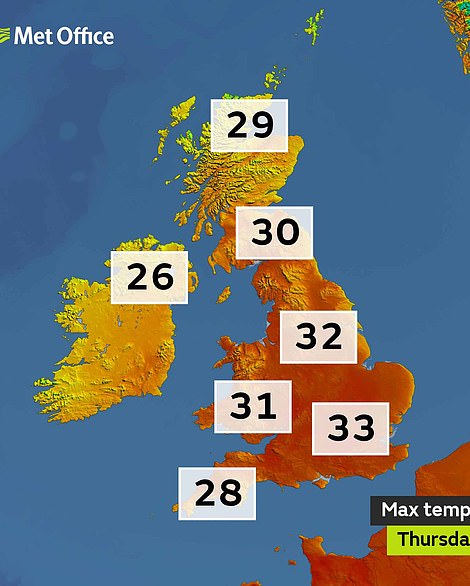 She added: ‘Heat exhaustion and heatstroke are two of the most serious problems that can develop when the mercury soars but by being prepared you can spot the early warning signs, such as headache and dizziness.’

Yesterday scores of Britons flocked to the nation’s beauty spots, including parks in central London and beaches in Bournemouth and Kent, as muggy weather last week makes way for a scorcher this week.

Peak temperatures are set to make the UK hotter than Ibiza or the Bahamas – with the Met Office issuing a level-two heat warning, urging those spending time outside to make sure they protect themselves from the sun.

The hottest day of 2020 until now was May 29 when Dawyck in the Scottish Borders got up to 84F (28.9C), and the Met Office said it is likely today will beat that in the South, then again tomorrow and for a third time on Thursday.

But while many people unable to go abroad due to coronavirus might welcome the heat, it comes with possible dangers with forecasters urging those spending time outside to ensure they protect themselves from the sun.

And on Friday, temperatures will drop as much as 46F (8C) in parts of Britain, as the June sunshine is replaced by cloudy weather, thunderstorms, rainfall, and intermittent lightning and hail in northern England and Scotland. 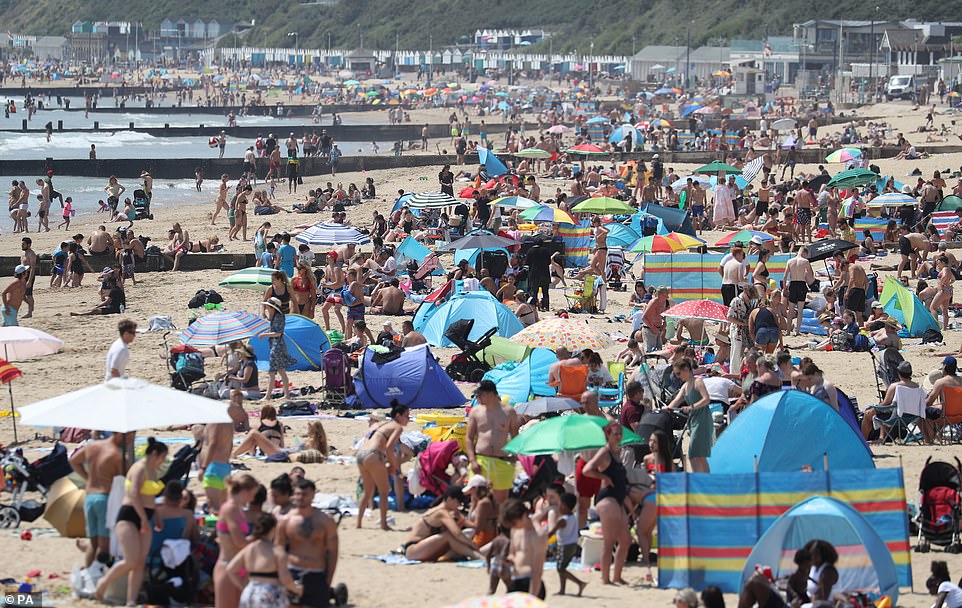 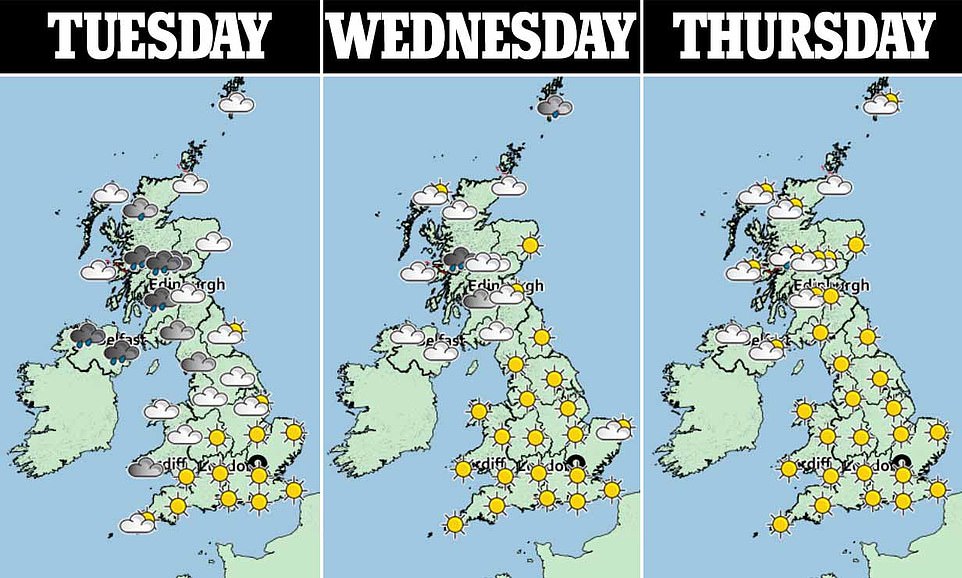 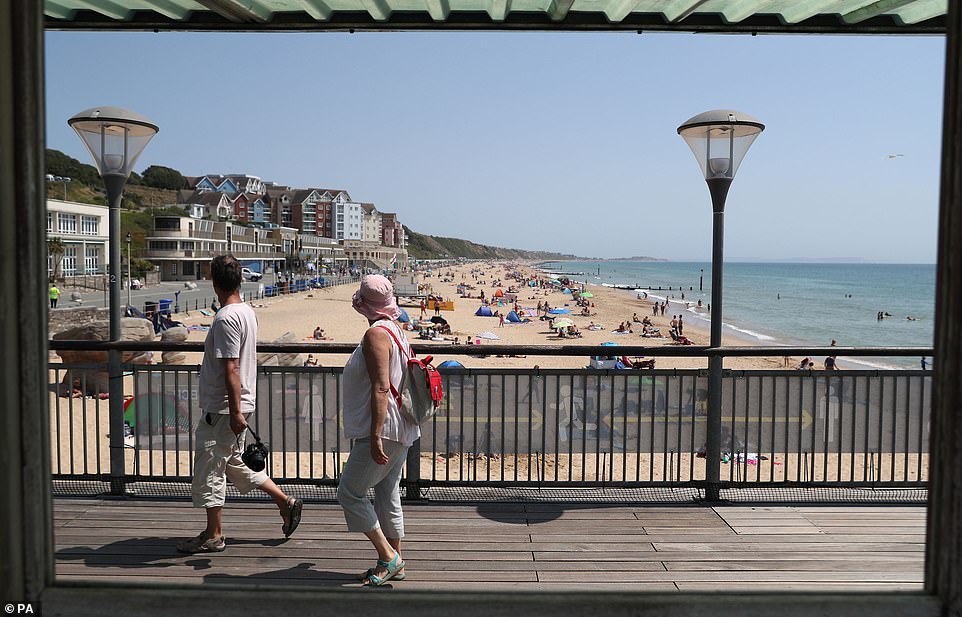 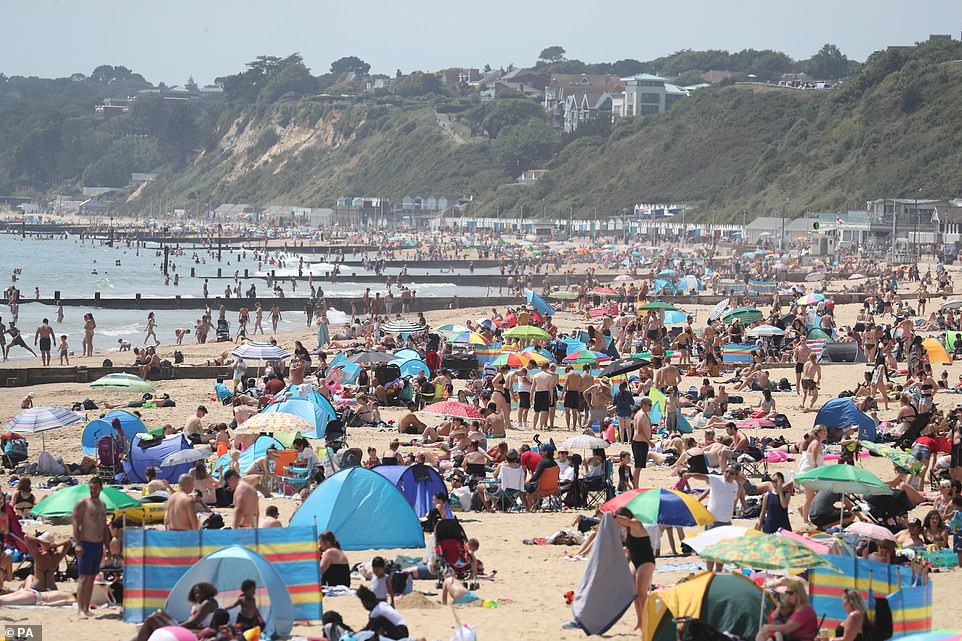 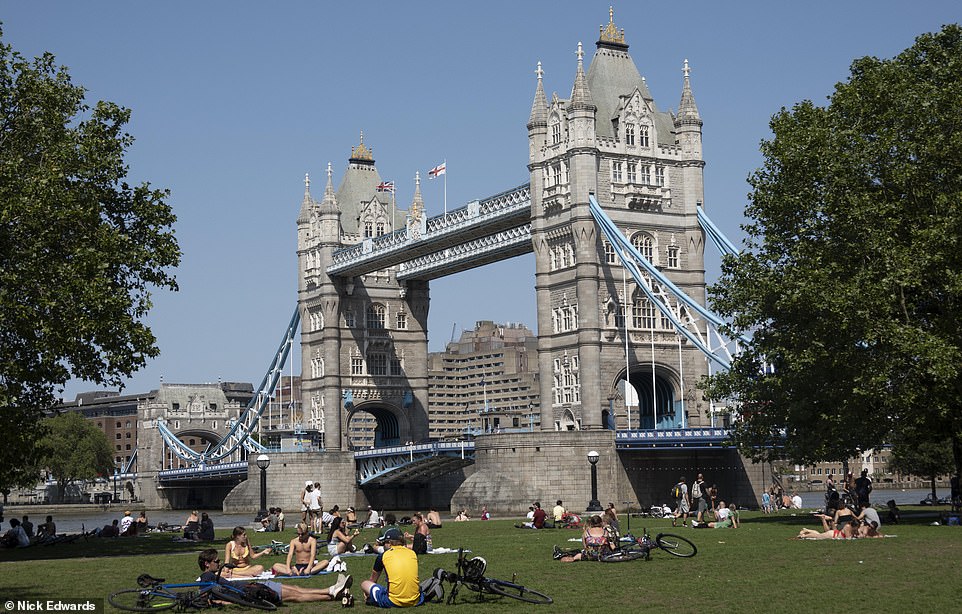 People enjoy the hot weather at Potters fields Park in Tower Bridge, London this afternoon, during the UK’s June heatwave 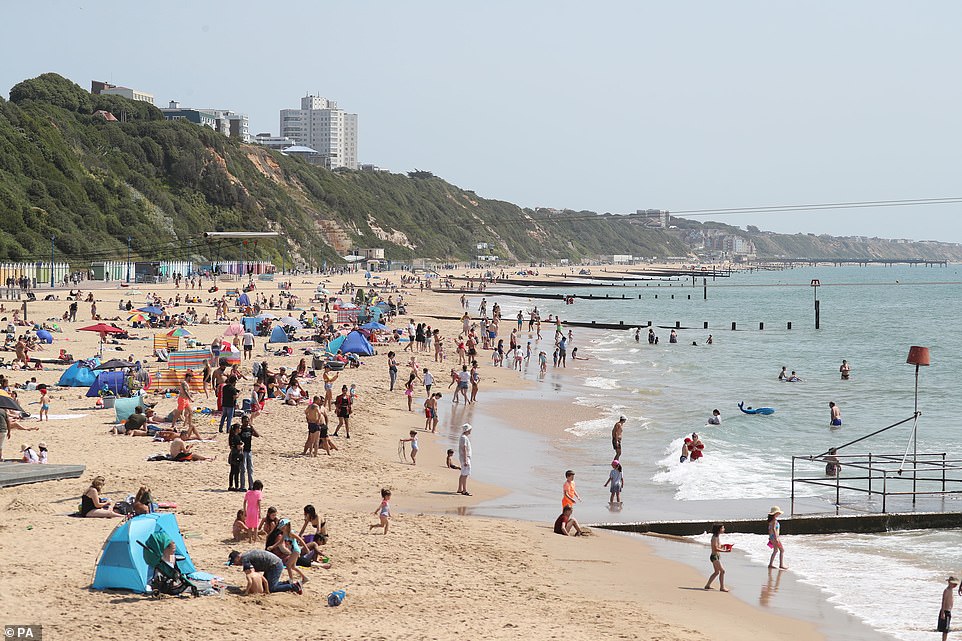 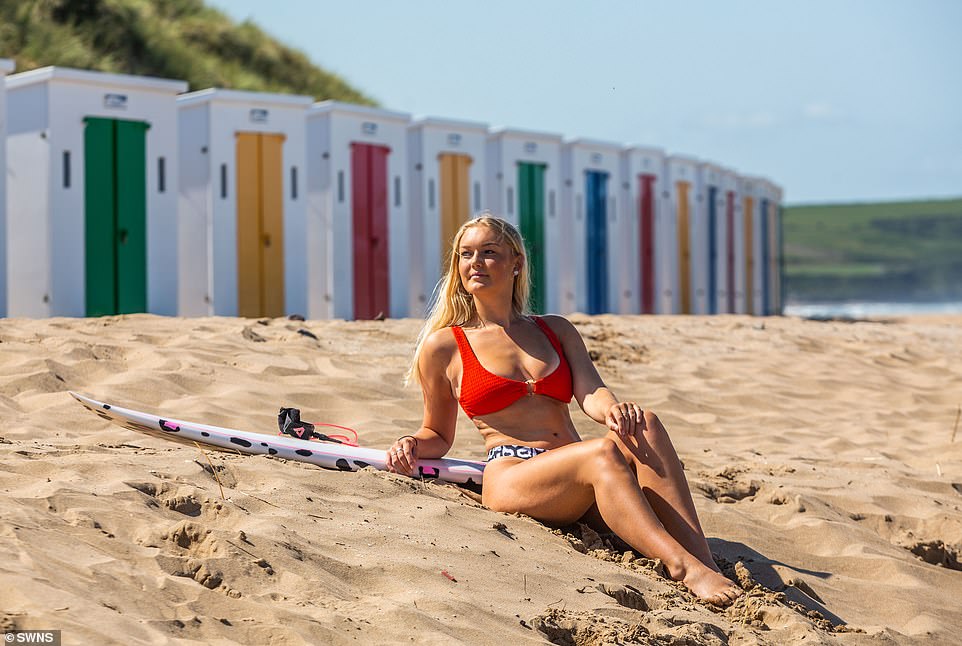 Britons suffering with hay fever, asthma and grass pollen allergies are expected to be badly affected this week, with pollen levels having been very high across most of England today.

According to the Met Office pollen map, today will be the worst day for hay fever sufferers, with all of the UK except Scotland set to experience very high levels of pollen.

Pollen levels will drop off on Thursday and Friday, before increasing again to ‘very high’ in time for the weekend in Wales, the south east and all of the east coast.

The Met Office said there is an 80 per cent probability of heat-health criteria being met between 9am tomorrow and 9pm on Friday. The warning is triggered when the risk of temperatures crossing a potentially risky threshold in one or more parts of the country for two days in a row hits 60 per cent.

The alert temperature varies regionally from 82F (28C) to 89F (32C) in the day and 59F (15C) to 64F (18C) at night. The Met Office said in its heat warning: ‘This is an important stage for social and healthcare services who will be working to ensure readiness and swift action to reduce harm from a potential heatwave.’

Met Office chief meteorologist Dan Suri said: ‘This hot weather is expected to last until at least Friday and so heatwave conditions are likely to develop for some areas this week. In addition to the warm days we are going to see some warm nights this week as temperatures overnight remain in the mid-high teens across England and Wales.’

Some were already making the most of the good weather yesterday, with open spaces such as parks and riverbanks filling up with sunbathers and those glad of the opportunity to finally take some proper exercise. 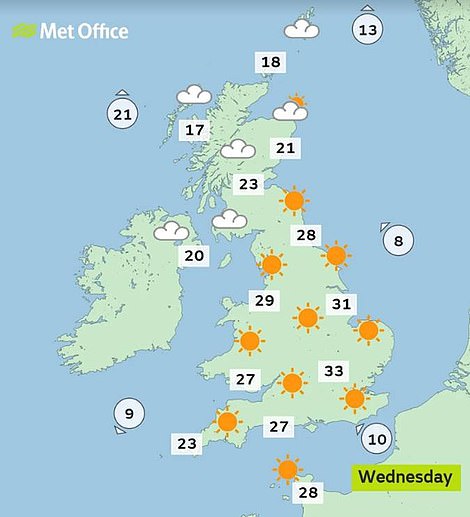 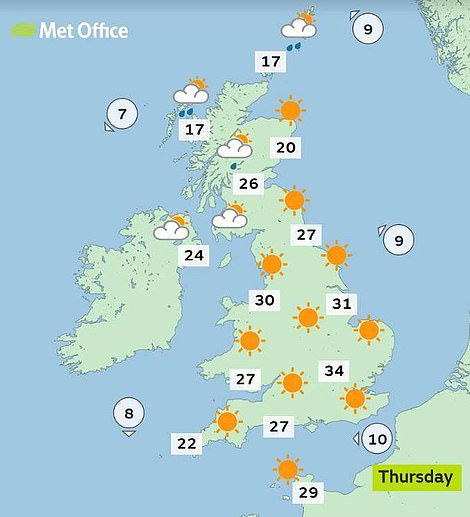 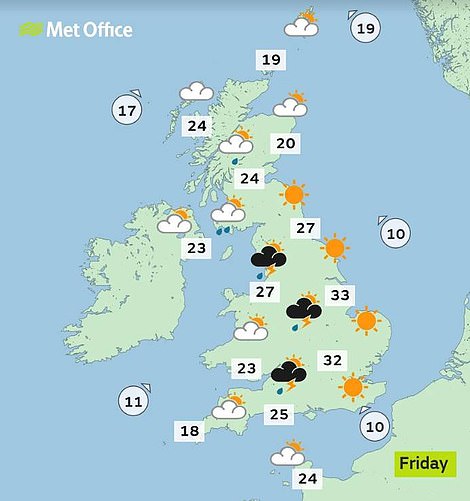 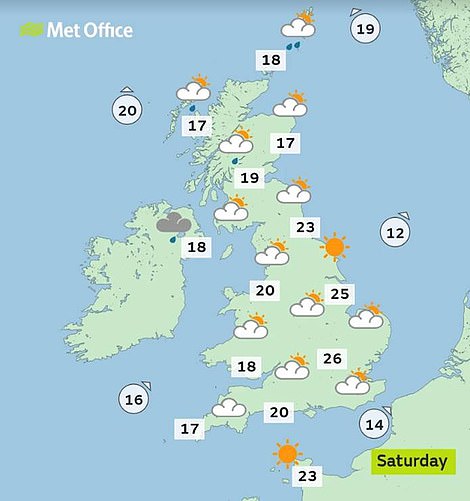 The balmy weather is expected to be followed by thunderstorms on Friday, and over the weekend it will be much fresher

In the New Forest, landlord Nick Cross found himself offering a cooling cider to horses Snowy and Whiteheart at the Sir Walter Tyrrell pub in Brook, Hampshire.

While many outdoor swimming areas remain closed because of the pandemic, meaning there are fewer places for overheating Britons to have a dip, beaches across the country are open and are expected to be very busy.

The balmy weather, however, is expected to be followed by thunderstorms on Friday, and over the weekend it will be much fresher and more changeable as temperatures drop. 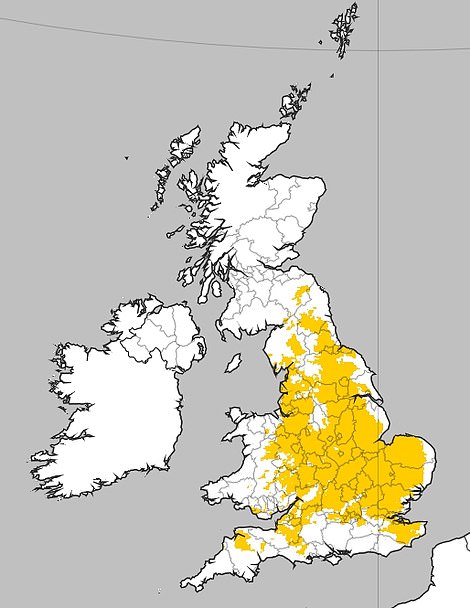 A Met Office forecaster said: ‘We’ve got high pressure to the South East of the UK over the next few days which is going to be drawing our air up from the continent’, and France and Spain.

Talking about the record for the hottest day of the year so far yesterday, Mr Miall explained: ‘It’s likely tomorrow (Tuesday) will beat that in the South, do it again on Wednesday and then again on Thursday.

Things will start to cool off for the weekend: ‘By Saturday most places will be seeing the fresher air coming across for the weekend, so although it might still be humid at times I think generally temperatures will be falling below heatwave.’

With the dry and sunny weather expected and the Government’s Covid-19 alert level lowered to three, emergency services across the country are urging people to continue to respect the two-metre social-distancing restriction.

The National Fire Chiefs Council (NFCC) has also warned against starting campfires which can easily get out of control, and to call 999 immediately if you spot a fire.

The NFCC said: ‘The weather is forecast to improve and, although we’ve had our fair share of rain recently, the risk of wildfires remains.

‘These fires are often preventable, so if you are enjoying the countryside please be wildfire-aware and look out for our advice.’

People with elderly relatives should also make sure they are finding a way to keep cool during the lockdown, Age UK has warned. The charity’s director, Caroline Abrahams, said older people are more susceptible to heat-related illness.

‘Lockdown and shielding bring added complications as it can be harder to spot someone who may be getting into difficulties and in need of extra help,’ she said.

‘There are so many different ways to get in touch during the pandemic, whether it’s a note through the door, picking up the phone, or, for those online, messaging via social media or chatting by video message like Face Time or Skype.

‘The important thing is keeping in touch and to make sure older people are okay.’