Forecasters warn Thanksgiving could be the coldest on record

Another blast of cold air is expected to bring one of the coldest Thanksgivings on record for some Northeast cities.

A strong area of high pressure from the Arctic Circle will descend southward across Canada and into the Northeast, sending temperatures plummeting toward levels more common on New Year’s Day, not Thanksgiving Day.

The weather is expected to plunge into the low twenties in Manhattan and could hit the mid teens in the coldest projected Thanksgiving on record since 1996, meteorologists told The New York Post. 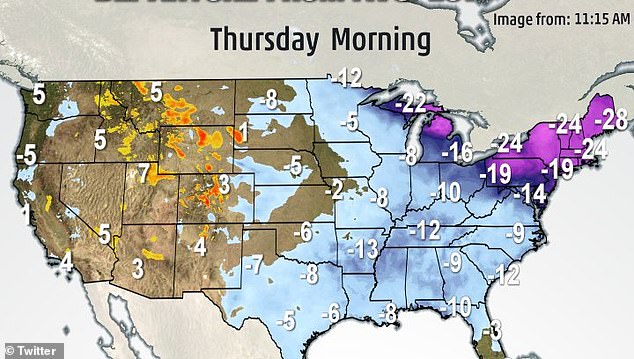 An Arctic blast sweeps into the Northeast late Wednesday, bringing record-cold wind chills in time for Thanksgiving, according to the National Weather Service

‘It’s going to be brutal out there’, said Accuweather senior meteorologist Dave Dombek.

‘If things stay as is, this will be the third-coldest Thanksgiving in New York history’, with the mercury set to reach a low of 19 degrees in 1901.

Tuesday is the busiest travel day for Thanksgiving in the Northeast, according to AAA, which says about 48.5 million people will drive this year.

About 4.3 million travelers will get to their holiday destinations by plane, the agency noted.

In the Northeast, snow could lengthen the time that travelers spend on the road and at the airports.

The National Weather Service in Boston wrote: ‘A weak wave of low pressure will bring light snow to the region [Monday] morning changing to rain except freezing rain in the Worcester Hills and east slopes of the Berkshires.

‘A stronger wave of low pressure will likely impact the area later tonight into Tuesday with accumulating snow across northern Massachusetts.

‘Rain may change to snow before ending Tuesday afternoon across Connecticut, Rhode Island and eastern Massachusetts’. 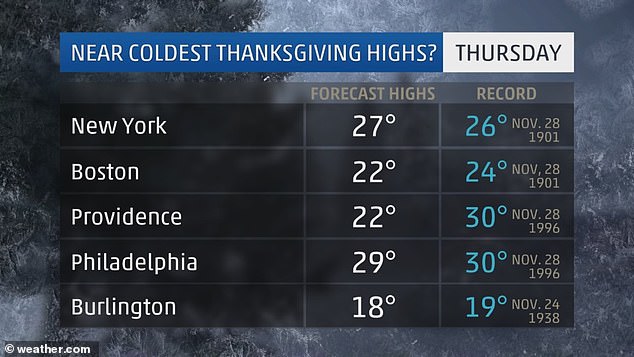 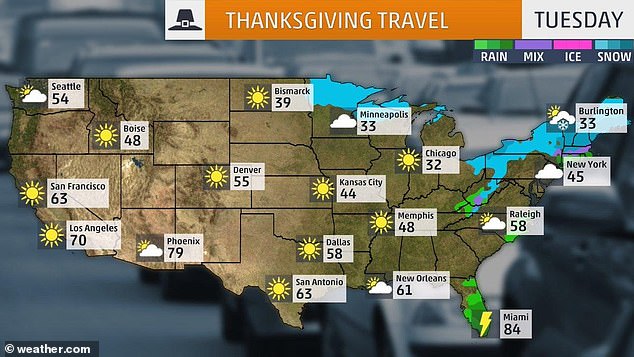 Tuesday is the busiest travel day for Thanksgiving in the Northeast and snow is expected to fall in Boston, which will change to heavy rain in Connecticut, Rhode Island and Eastern Massachusetts 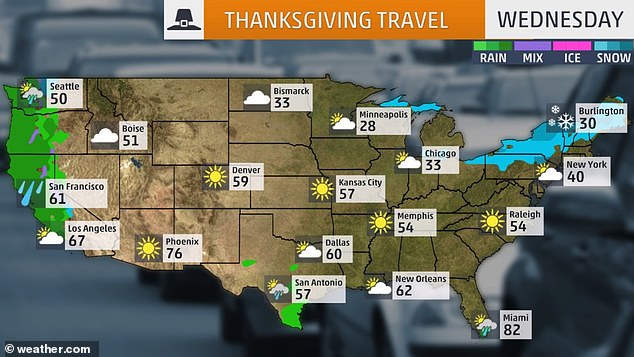 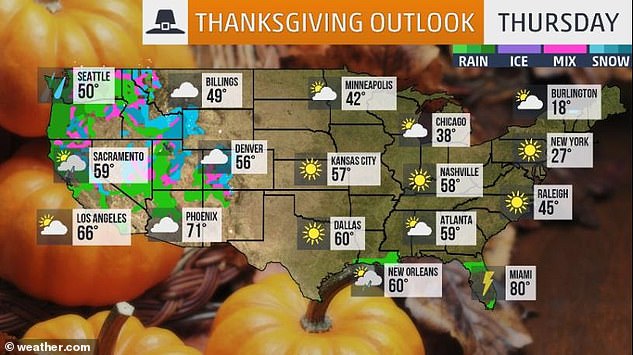 At the very least, it looks as though it will be the coldest Thanksgiving in more than 20 years

Behind the snow, an Arctic blast sweeps into the Northeast late Wednesday, bringing record-cold wind chills in time for Thanksgiving.

From Maine to Pennsylvania, temperatures could be lower than they’ve ever been on Thanksgiving, even in the years the holiday fell very late in the month.

Early-morning lows drop to about 20 degrees from Philadelphia to New York City.

In Upstate New York, temperatures at sunrise will be in the single digits, while Boston’s Thursday-morning low temperature will be about 15 degrees.

According to the National Weather Service, only three Thanksgivings have had high temperatures below 30 degrees.

The coldest Thanksgiving Day on record in New York City was November 28, 1901, when the high temperature was 26 degrees, which is also the forecast for Thursday.

In the Midwest, a chance of light snow during the day and night on Tuesday shouldn’t be a travel day. 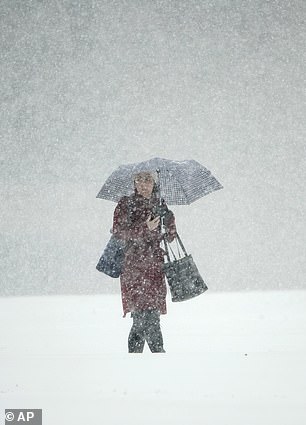 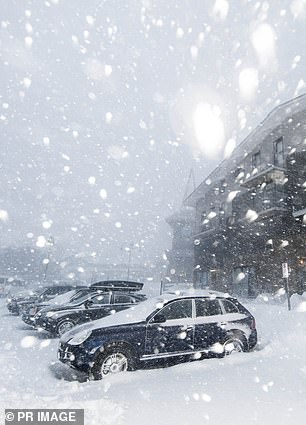 According to the National Weather Service, only three Thanksgivings have had high temperatures below 30 degrees 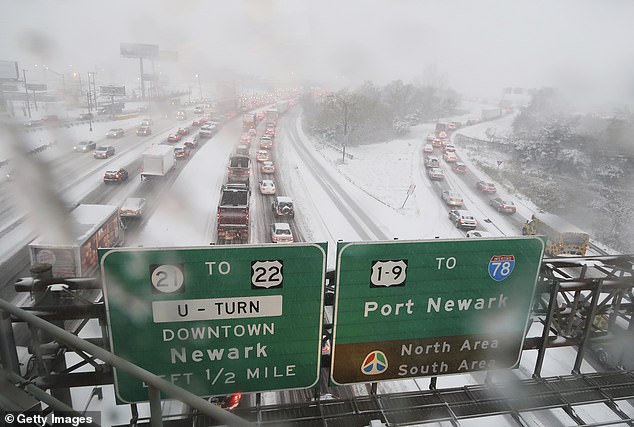 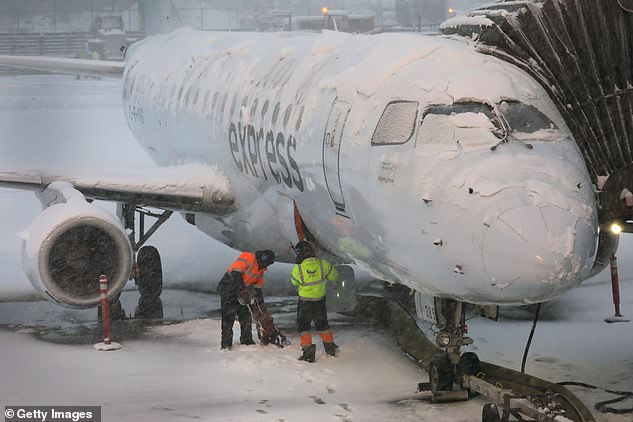 But wintry-cold temperatures are flowing across the Great Lakes, which will generate snow for some of the areas off Lake Michigan, Lake Erie and Lake Ontario through Wednesday.

Light snowfall is in the forecast for Northeast Ohio; Erie, and western Upstate New York into late Wednesday afternoon and evening.

Thanksgiving should be dry for much, if not all, of the Midwest. High temperatures Thursday are in the 20s and 30s.

In the West, the National Weather Service is advising drivers to plan extra time into their trips as a storm off the coast of California will delay travel starting Wednesday.

After weeks of dry conditions under strong high pressure, a significant pattern shift will occur by Wednesday as weak to moderately strong weather system moves into the region,’  the National Weather Service in Reno, Nevada wrote on Monday.

‘This means that [Monday] and Tuesday will be the best days for those with travel plans this week’.

Snowy and windy conditions are likely over the Sierra passes above 7,500 feet starting Wednesday morning. The combination of snow and wind could reduce visibility significantly at high elevations.

Rain is also possible in parts of Texas on Tuesday, the region’s busiest Thanksgiving travel day, according to AAA.

Houston’s travelers tend to hit the road today between 2pm and 4pm and in Dallas, most air travel is scheduled Monday between 5pm and 7pm.